Making up the majority of the undergraduate population and 50% of the faculty population, women are represented but still face inequity 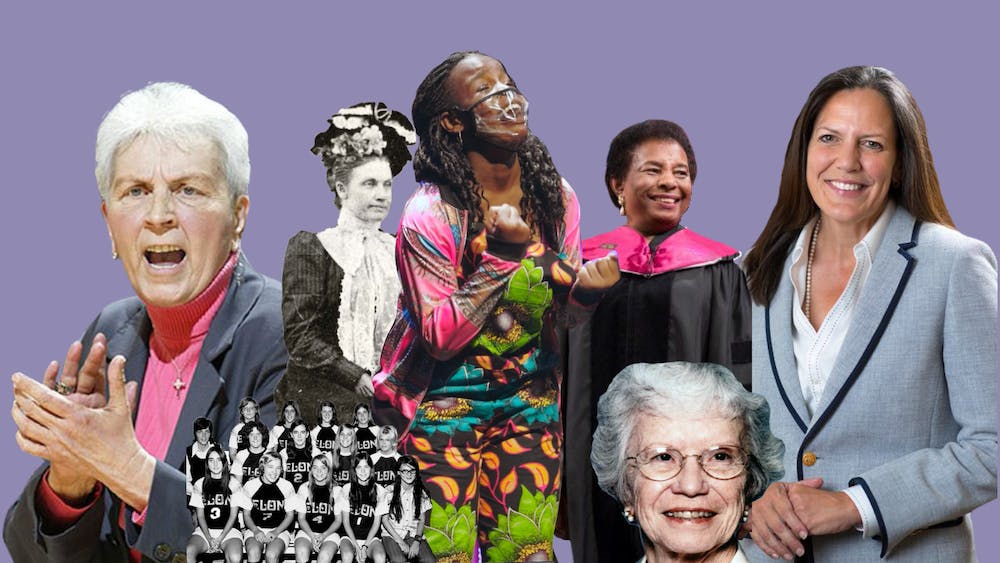 Photo by Nyah Phengsitthy | Elon News Network
Making up the majority of the undergraduate population and 50% of the faculty population, women are represented but still face inequity.

From being 60% of the undergraduate population to 50% of the faculty population, female members of the Elon community are represented across academics, clubs, organizations and in leadership positions — including leaders like President of Elon University Connie Book, and juniors Chloe Yoon and Hailey Jurgens, both of whom are executive members of Student Government Association.

Jurgens is one of 3,761 female students on campus this spring. She started out in SGA her freshman year at Elon. Now executive secretary, Jurgens said she didn’t speak up that much that first year — she said she didn’t feel like her voice mattered.

“I think [that] speaks to a lot of the females on this campus, who are constantly being spoken over,” Jurgens said. “Our voices aren’t heard as often as men. Even though we are 60-40 on this campus, most of the time the people asking questions, the ones talking in class, are our male counterparts.”

According to the 2021 registrar’s report, the number of female students has increased proportionately to the overall student population since 2010 from 2,710 female students to 3,761. Over the last 10 years, women on campus have made up anywhere from 61% of the population to 59%, according to the 2021 university factbook. This academic year, the undergraduate student ratio is 60% women to 40% men.

“I wanted to seek to make every student who felt uncomfortable in any way at Elon because of an identity they held to feel comfortable and to feel at home at Elon,” Yoon said. “As a university, Elon tries to push the whole rhetoric that we automatically belong here, when that’s not always the case.”

While representation on campus is important, it is not the only step workplaces and universities alike can take to make more equitable environments for female community members, said Siri Chilazi, a gender and organizations researcher and speaker at the Harvard Kennedy School.

Chilazi studies the gender gap in workplaces and identifies ways organizations can close the gender gap. She joined this field after experiencing the impacts of gender discrimination herself.

From seeing a professor who looks like their students to even how a classroom is decorated, representation at all levels can and will change how female students interact and succeed on campus, Chilazi said.

“Seeing is believing, and who we see around us, unconsciously and consciously, affects what we envision to be possible for ourselves,” Chilazi said. “If you don’t see anyone who looks like yourself in that nature or in that department or in that academic context, it’s so much harder to envision yourself there.”

For Elon President Connie Book, who stepped into her role as the university’s first female president in 2018, it is important for the campus community to see a woman holding the position of president.

“I do think it’s really great for women to see me in this role because I think it’s the same reason it’s important to have people who look like us in the classroom or in the job in the workplace,” Book said. “It shows you if I want, I can do it, that’s a possibility.”

"Seeing is believing, and who we see around us, unconsciously and consciously, affects what we envision to be possible for ourselves. If you don't see anyone who looks like yourself in that nature or in that department or in that academic context, it's so much harder to envision yourself there."

gender and organizations researcher and speaker at the Harvard Kennedy School

Seeing women of the Elon community in leadership roles, whether in a club, organization or classroom, helps students see themselves in many capacities across campus, Book said.

In clubs and organizations, there are 3,333 female student members during the fall semester, according to data from PhoenixCONNECT provided by Jenny Ciesiulka. Of those 3,333 female members, 991 of them hold leadership positions within their club or organization.

Provost Aswani Volety said the representation of women in both faculty and students is important to Elon, and the university works to promote diversity in gender and “across the board.” To promote diversity within faculty, Volety said the university aims to recruit applicants by posting in “targeted areas” such as in journals and at conferences that reach underrepresented groups.

“When we put a committee together, we want to make sure that different voices are at the table, and that could mean that we have female representation, we have people of color, or people of underrepresented groups,” Volety said. “Just having people around the table changes the conversation.”

Jurgens said she saw men speaking more than women in SGA, and since she noticed the difference, she has made it a goal to come prepared to speak at each SGA meeting. Jurgens said she was inspired by previous women leaders in SGA as well.

“I think that does speak a little bit to society’s norms, that men feel that they can go up and speak about anything, whereas females feel like we need to think things through and we need to be eloquent in what we say and supportive,” Jurgens said. “The stereotypical male thought is, ‘My voice matters,’ where females think, ‘My voice doesn’t matter as much as someone else’s.’”

Similar to the culture within organizations, the culture in classrooms impacts students as well. If a student has a female professor for math, but is still the only female student in the room, there are disadvantages and hurdles that student still faces, Chilazi explained.

“You might see close to gender parities in faculty and even in the student body, but let’s say there’s a really toxic culture, where the male faculty actually make all the decisions, and they sideline the female faculty, and maybe there is sexual harassment that’s rampant, women’s contributions are systematically sidelined, they are less likely to get promoted and get tenure,” Chilazi said. “Then you’re not going to see a 50-50 in faculty for very long because it’s a toxic environment for those women, and they’re going to leave.”