The panel included members from several departments and schools to provide an analysis of Chauvin conviction, trial 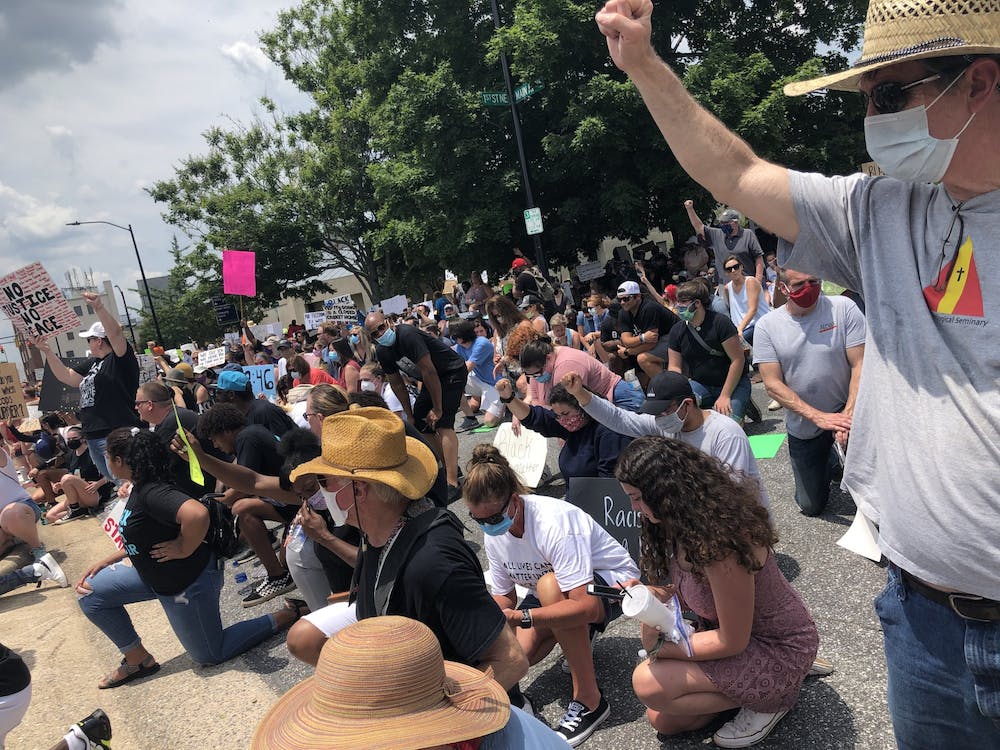 Photo by Ethan Porter | Elon News Network
Demonstrators at a protest in Hickory kneel and raise their fists for eight minutes and 46 seconds the same amount of time George Floyd, a black man, was pinned to the ground by a white police officer.

Six Elon University faculty and staff members hosted a discussion via Zoom on April 28 titled “A Divided America: A conversation on race, policing and justice.” The panel, moderated by Damion Blake, assistant professor in political science and policy studies, was cosponsored by the Council on Civic Engagement and the Center for Race, Ethnicity, & Diversity Education.

The panelists, in addition to Blake, included members from the School of Law, College of Arts and Sciences, School of Communications and Campus Police. The group discussed the April 20 conviction of Derek Chauvin in the murder of George Floyd and the implications of the trial in a historical context.

“This is part of our role as a university to think about preparing students to be active citizens, to thoughtfully consider more than just the headlines in the news,” said Carrie Eaves, associate professor of political science and policy studies and co-chair of the Council on Civic Engagement. “We need to think about how these events fit into a broader story, a broader context of American history and systemic issues.”

Even though the panelists were confident in the role Chauvin played in George Floyd’s murder, many were doubtful about a guilty verdict. Activists and protesters have gathered frequently over the course of the year in response to Floyd’s death, demanding justice and accountability.

“I decided to make sure I was at home when the verdict was read,” said Wendy Scott, associate dean for academic success at Elon Law. “The verdict was just, but there was still this grain of doubt in my mind that there would be an unjust verdict.”

Charles Irons, professor of history and chair of the department of history and geography, made note of the historical and systemic oppression of people of color in America.

“The tradition of state sponsored violence to discipline Black bodies to the point of death is part and parcel of white supremacy,” Irons said.

Irons said that he felt so much relief after the Chauvin trial, partly because of the historical precedent set by the conviction of an officer who killed an unarmed Black man.

“This is not over, the trauma is still ongoing,” said Steve Friedland, professor at Elon Law. “This is like peeling back the layers of the onion. We’re just now starting to peel them back.”

Buffie Longmire-Avital, associate professor of psychology, highlighted the importance of activism in response to Floyd’s death.

“It took so much effort from the populist to create the attention this [trial] needed. I think we should continue to push on and get to a place where, without a shadow of doubt, we know what the verdict should be,” Longmire-Avital said.

“People in law enforcement need to step up and be leaders to regain trust,” LeMire said.

Attendants of the panel included freshman Lottie Higgins, who said she wanted to become further educated about the aftermath of Chauvin’s conviction.

“I like how Elon provides us with opportunities to hear experts speak about such pressing problems that plague this country,” Higgins said.

Rochelle Ford, dean of the School of Communications, said that Chauvin’s conviction was just the beginning of addressing police brutality across America.

“Justice hasn’t been served. Injustice is the fact that [George Floyd] died. Injustice continues but accountability was found.”