Amid a year of political turmoil, the cast and crew of “Macbeth” altered their production to make it feel more like fantasy than reality 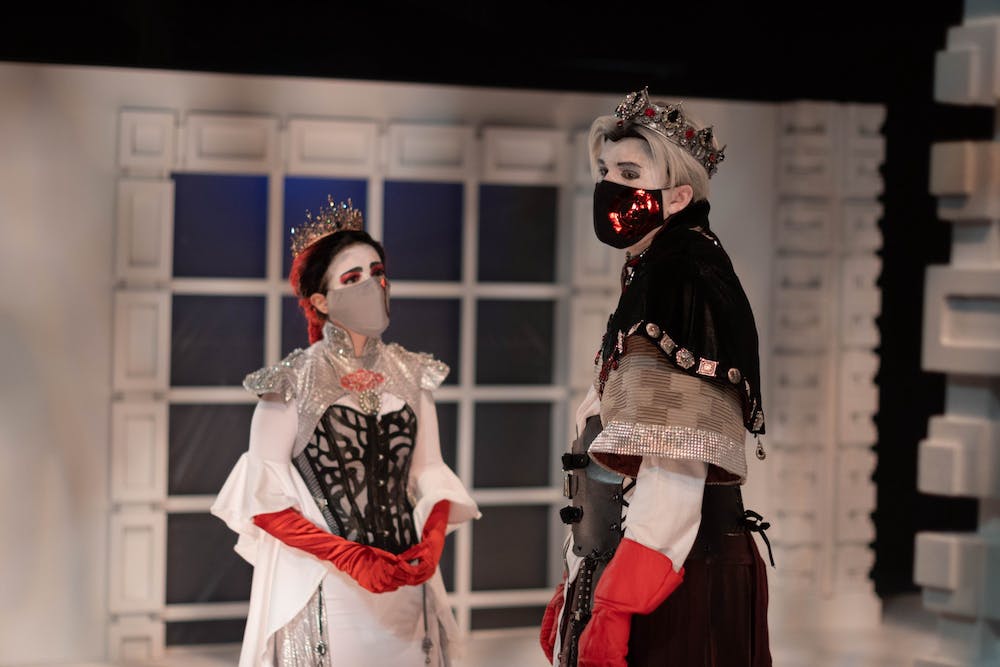 Actors partake in a dress rehearsal of Elon’s production of “Macbeth” on April 12, 2021. Photo courtesy of Weston Lecrone

“Macbeth” is a Shakespearean production based on the idea of how power corrupts, but following the insurrection at the U.S. Capitol, the director of Elon Performing Arts' spring 2021 play, Kim Shively made it a priority to convey the work in a way that did not bear any resemblance to the political discrepancies occurring in the US.

A few weeks prior to the start of the play's rehearsals a mob stormed the U.S. Capitol building in an attempt to overturn former president Donald Trump’s defeat in the 2020 presidential election. Five people died and $30 million in damages were inflicted.

“I realized that I was exhausted by the news cycle, and we decided to lean into the horror aspect of the story and place the world in a realm of fantasy,” Shively wrote in an email to Elon News Network. “The truth of the story still remains, but I don’t want it to feel real.”

Junior music theatre major Andrew Edelman is the assistant director of “Macbeth,” and he said to portray the play in this manner, the directors heightened its plot and made it more surreal.

“The aesthetic of the show is extremely creative,” Edelman said. “We have found a way to sort of flip it on its side and make it that much more interesting to draw the audiences. In a way it still is sort of a form of escapism from what I would say is, arguably, more of a depressing reality.”

One of the elements added to the production to achieve this goal is the introduction of Butoh, a Japanese style of dance. Throughout the scenes, the three witches in “Macbeth” will move using this technique. Sophomore Hayley Covington, who plays one of the witches, said Butoh rejects the Western style of dance.

“It’s not a pretty style of dance. It’s honestly really creepy,” Covington said. “If you’ve seen ‘The Ring’ or ‘The Grudge,’ those kinds of creepy movements, like when the girl comes out of the TV. That’s what the Butoh movement is like.”

This use of Butoh is a style choice that Edelman said adds to the aesthetic of the show, which he described as, “a crossover between Japanese anime and steampunk.”

The casting for Elon’s production includes several gender bends: roles traditionally played by one gender that are played by the opposite. Macduff and Malcolm, two central characters in the play that are traditionally portrayed by male actors, are being played by women.

In addition, male actor and sophomore Bret Sherman is playing a witch in the production, a role typically filled by women.

“I think gender just adds a whole ‘nother layer to it,” Edelman said. “It’s a really interesting way to bring the show into modern day.”

While rehearsing, the cast avoids using the production’s title due to a historic superstition within the acting community that saying “Macbeth” outside of an actual performance is bad luck. Instead, when a line in the script includes the name Macbeth, actors say the word “Mackers”.

“As a young actor, you hear people joke about it, but there’s a long history of mishaps — of light’s falling on actors, of people getting injured by set pieces — just very unfortunate mishaps, which some people believe to be a sign that the show is cursed,” Edelman said.

During rehearsal, there are many COVID-19 safety protocols the cast follows in addition to wearing masks and physically distancing. Actors are only allowed to touch their own props, and the cast and crew leave their rehearsal space to clear the air out every one hour and 20 minutes.

In the case that someone is required to quarantine during rehearsal, they use Zoom to call into practices. As an extra precaution, every role has an understudy in case a cast member is a close contact or tests positive for COVID-19.

When trying on costumes, all pieces must sit untouched in a garment bag for at least 72 hours before and after they are tried on. This rule has made the fitting process longer for the costume designer, Jack Smith, and the costume shop manager, Heidi Jo Schiemer.

During alterations, along with their normal face coverings, Smith and Schiemer wear a face shield, lab coat and rubber gloves as an extra precaution.

Tailoring costumes while in vinyl gloves is a skill Smith said has not been easy to master.

“I have a new respect for surgeons that I perhaps would not have had before,” Smith said.

In each of his designs for this show, Smith has worked to incorporate personal protective equipment into the costume.

The warriors in play each have a face mask with an emblem of an animal on its side known as a totem. Each totem created for the show features an animal that has qualities that its designated character also possesses.

“If you’re outside of a castle or a home, the environment is very toxic and it just corrodes the mask. If you’re inside the world is still very toxic, but it is less corrosive,” Smith said. “We created a world where PPE made sense, and then we embraced that.”

Without the ability to touch each other, Edelman said the use of body language and eye contact has been important for actors while performing.

“It’s amazing how much of a story you can tell just through your eyes,” Edelman said.

“It really was sort of an emotional blow to the department to have to shut down before the show could be mounted,” Edelman said. “So then a year later to circle back to Shakespeare and be able to breathe new life into it — I think it was a nice full circle moment.”

The time spent apart from one another throughout the pandemic has also made “Macbeth” mean more to the cast.

“I think to come back together and be in a show together, there’s really nothing more meaningful than that for us,” Edelman said. “‘Macbeth’ really represents so much more than just being the spring play.”.

The actors have been practicing for this production since early February and filmed the play on April 10. The play will air on the Elon Performing Arts website on April 16 at 7:30 p.m. and will be available for two weeks.