Elon University’s National Pan-Hellenic Council Garden is enhanced almost 16 years after its inception, with renovations to be revealed April 18 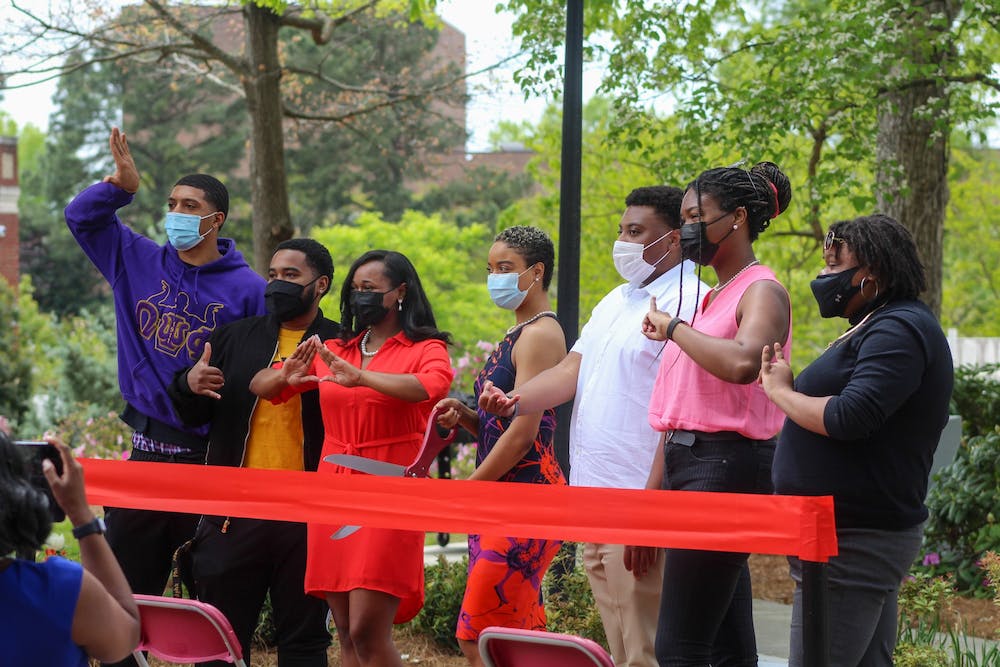 
Members of Elon University's National Pan-Hellenic Council moments before cutting the ribbon to the renovated NPHC Garden on April 18, 2021.

Elon’s National Pan-Hellenic Council Garden will reveal renovations in a celebration this Sunday, April 18. The garden, located by the Janice Ratliff Building, is dedicated to the historically Black fraternities and sororities on Elon’s campus.

“It just kind of fell in the backdrop of Elon, it kind of blends in and we felt like we were almost in the shadow of the Loy neighborhood,” Chandler Vaughan, president of Elon’s NPHC Executive Board, said. “Just the spirit of the place was not reflective of the vibrant cultures and traditions of our organizations.”

The updated garden has added benches, a brick patio area and an informational sign that explains the history of the NPHC at Elon. Vaughan and NPHC advisor Jarrod Rudd, assistant director of Student Involvement for Fraternity and Sorority Leadership Development, worked to put together the celebration to reveal the newly improved garden.

“Myself and him have reached out to various stakeholders, whether that be students, alumni, leaders on campus, and then just trying to make this a celebratory moment, we really want it to be an easy flowing event,” Vaughan said. “We've got people who are going to be able to livestream it for a virtual option and we are getting our members excited, and can't wait for them to have representation there. It's just a great moment in NPHC history.”

Elon’s NPHC Garden was first unveiled in September 2005, and was inspired by traditional plots at historically Black colleges and universities. According to Rudd, a traditional plot is an area on campus dedicated to an NPHC organization. At HBCUs, there are typically separate plots for each organization recognized on campus, and only members of that organization are allowed to go to that plot. Each is unique, from painted colors and monuments to benches and brick docks.

The NPHC at Elon proposed a plot tradition on campus in 2001. A university task force was formed to look at what other universities’ and colleges’ plots looked like and represented. In October of 2004, they proposed the garden — not a traditional plot, but one dedicated to bringing students together to learn.

“Ours aren't traditional plots because all of the monuments are in one area, and there's not really an ownership over the area,” Rudd said. “The NPHC garden, while it's dedicated to the NPHC, it's really for the campus community to learn about the organizations, learn about the history of the organizations and utilize that space, amongst the campus community, instead of it being a members only space.”

The NPHC was founded at Howard University in 1930 and was initially made up of three sororities and two fraternities. Now with nine organizations — known as the Divine Nine — the council has an average of about 700 chapters per organization across the country.

Vaughan said she feels like the garden is another step in increasing visibility of NPHC and connecting with the broader Elon community. Over the past year, Elon’s NPHC organizations have continued their programming and events virtually to promote education, support racial equity movements and support the Black Student Union on campus.

“So often, [students] don't know who NPHC is or what they really stand for,” Vaughan said. “We've really been trying to do that through our programming and various cultural events, as well as community service.”

Rudd believes the garden can connect all students and better represent not only historically Black greek organizations, but also the history behind why they were founded in the first place.

“I think if we can see it as an educational space, and use it as that, I think that it really has the power to bring people together,” Rudd said. “We're really hoping that this really becomes a place where people come for understanding and come to learn a little bit, so that we're able to move forward and have some really good relationships and have some really good educational moments.”

Both are looking forward to the opportunities that the renovations of the garden can bring.

“I'm a proud member of NPHC,” Vaughan said. “I feel like our founders would be proud of the work that we're doing.”