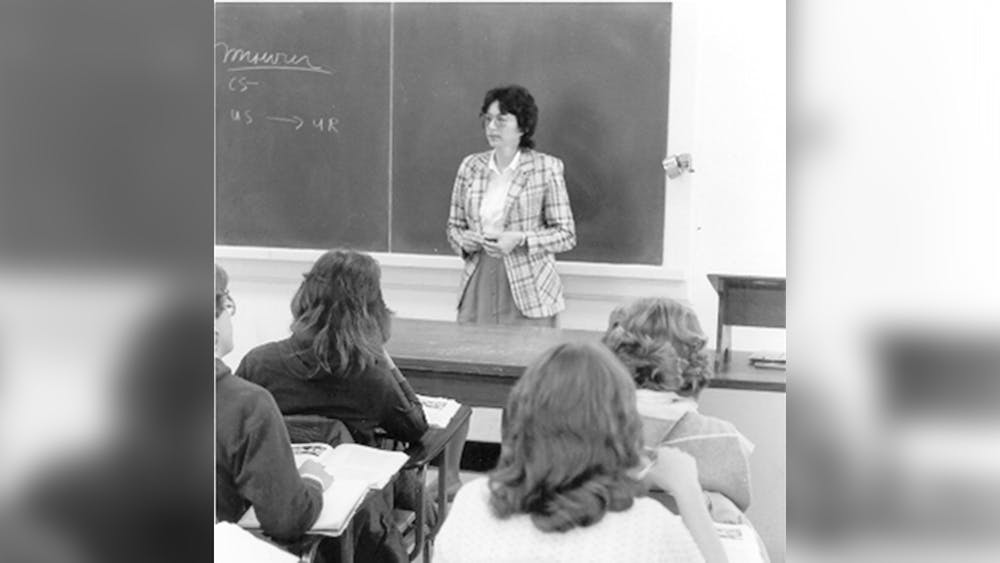 When sophomore computer science major Milli Kearse first arrived at Elon University, she worried the odds were stacked against her. She had an aptitude for math and science and a passion for social justice that rooted her determination to study STEM and enact change in the field. But Kearse said she feared she may be overlooked in Elon’s STEM departments simply because she is a woman.

“Coming to Elon and choosing a major that is very male dominated, at first, I was very frantic,” Kearse said. “Like, ‘How am I even gonna do this? Can I even do this?’”

Kearse, a York, Pennsylvania native, said her secondary education never covered concepts like feminism and gender equality. So when the time came to select her freshman year electives, a course titled WGS 110, Sex and Gender, piqued her curiosity.

WGS 110 is the first of two required courses for students pursuing a minor in Women’s, Gender and Sexualities Studies — a 20-credit hour program “dedicated to critical inquiry about women, gender, sexualities and feminism,” according to the course webpage.

“I was like, ‘I think this would be really interesting to me,’” Kearse said. “I come from a school environment where we didn’t really have classes like that. I didn’t have connections where I could find people that shared my values or learn how to put into words what my values were.”

Kearse saw that supportive environment in her WGS 110 course, and after, she contemplated pursuing a WGSS minor. While she was considering, Kearse said she heard anecdotes doubting the productivity of the minor.

"I come from a school environment where we didn't really have classes like that. I didn't have connections where I could find people that shared my values or learn how to put into words what my values were."

“I got a lot of comments from friends being like, ‘What would you do with that?’ Or like, ‘How, would you make money?’” she said.

The minor, initially called Women’s Studies, was developed and introduced at Elon in 1988 by professors Martha Smith and Seena Granowsky, who were inspired to found the program after attending a conference at Duke University on Women’s Studies programs, according to Elon University archives. Since 1988, the minor has served as an interdisciplinary analysis of women’s issues.

Smith, an English professor who began at Elon in 1963, served as the first program coordinator for the Women’s Studies minor from 1988 until her retirement in 1994. According to Elon archives, when Smith was asked her reasoning for developing the program, she said, “We did it because we wanted to do it, and because the students responded to it.”

Smith passed away in 2016, but her legacy is upheld through the Martha Smith Award for Women’s, Gender, and Sexualities Studies, an honor given to a graduating senior recognizing outstanding achievements in the minor.

The minor’s third coordinator was Elon history professor Mary Jo Festle. Festle came to Elon in 1993 and said she was attracted to the novel program because of its supportive faculty and teachings that aligned with her own personal values.

“There was a lot of excitement both in the world and on campus about taking seriously the study of women and gender,” Festle wrote in an email to Elon News Network. “In the mid-1990s, the field wasn’t very old, and there were so many questions and issues that hadn’t been researched.”

The next significant change to the minor came in 2015 when, after a yearlong review by the program’s advisory council, the Women’s and Gender studies minor became the Women’s, Gender and Sexualities Studies minor that Elon students know today. In revising the program, the council established six areas of emphasis: critical inquiry, interdisciplinarity, identity, intersectionality, societal structures and action.

With the updating of the minor, the program strengthened its ties to Elon’s Gender and LGBTQIA Center, the GLC, and the Center for Equity and Inclusive Excellence. According to Festle, individuals involved in WGSS have played key roles in the implementation of policies regarding sexual harassment and assault, bias reporting, maternity and paternity leave and universal restrooms, among others.

In 2019, Festle spoke at the annual Women’s, Gender and Sexualities Studies banquet about the program’s contributions to the university. Festle shared a copy of her speech with Elon News Network.

“While many things have changed in 30 years — like names of the program and the courses offered — what hasn’t changed is that students want courses and instructors that make them think about important questions, encourage them to look at the world in new ways and help them to consider how to create meaningful lives and influence their communities,” Festle said at the banquet.

In her speech, Festle credited the program as an early example of interdisciplinary collaboration at Elon and emphasized the value of approaching complex societal issues, including feminist causes, from different intellectual angles.

"They put more value on understanding cultural differences and the ability to work with people who are different from ourselves and the ways diverse identities and ideas can enrich decision-making."

3rd Coordinator of the Women's, Gender and Sexualities Studies minor

Despite its interdisciplinarity, Festle said the program fosters a community of like-minded individuals. In her speech, she acknowledged that while it is beneficial interact with people who share different beliefs, it is equally as important to cultivate a space where Elon faculty, staff and students who identify with broad feminist ideology can support each other. Mutual support, according to Festle, is key in order to be a “positive force” in addressing political, social and economic inequity.

According to Festle, she has observed doubts about the minor lessen over the years, adding that companies are increasingly appreciative of students who study humanities like WGSS.

“They put more value on understanding cultural differences and the ability to work with people who are different from ourselves and the ways diverse identities and ideas can enrich decision-making,” Festle wrote.

Kearse said she believes those who disapprove of WGSS fail to consider the value of taking classes for personal growth.

“I think people are scared of change,” Kearse said, “and scared of people that know how to put real life experience into perspective.”

Kearse was a recipient of the WGS 110 Engaged Student Award, and she now credits the class for her ability to advocate for women in STEM and have conversations about intersectional feminism — something she was always passionate about but struggled to communicate before coming to Elon.