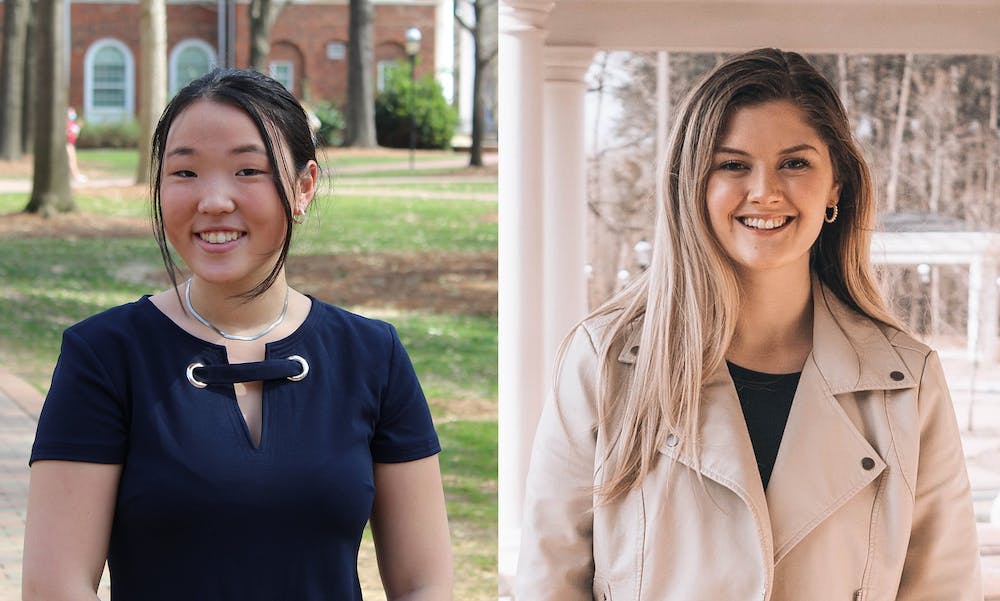 Juniors Chloe Yoon and Ireland Horan are facing off in SGA's runoff election for executive vice president after no one got a 50% majority vote.

For the first time in five years, two candidates for an executive position on Elon’s Student Government Association are participating in a runoff election.

Elon juniors Chloe Yoon and Ireland Horan are continuing their campaigns for executive vice president after neither candidate received more than 50% of the vote in last week’s election.

Voting for the runoff opens Tuesday, March 23 on Phoenix Connect.

According to SGA’s constitution, candidates for executive positions “must win by a majority vote of the votes cast in a campus-wide election.” Trevor Molin, the third candidate who is no longer in the race, said he isn’t endorsing Yoon nor Horan, but is encouraging his supporters to vote again.

In the election, Yoon received a majority vote of 48%.

“It was initially hard because I think like campaign burnout might sound silly, but it's real,” Yoon said.

Horan received 34% of the vote in the election.

“I was a little confused at first because this is something I've never seen in my time here,” Horan said. “But, I’m just excited.”

Yoon said knowing she received the most votes the first time left her hopeful.

“I got so many messages being like, ‘I'm so glad you're running, like...I've never seen an Asian [candidate]’ —well, because very few Asian candidates I think have run in SGA,” Yoon said. “And so I think that was really uplifting to see so many different people being like, ‘Wow, I'm so impressed to see someone new at the table.’”

In between elections, Both Yoon and Horan said they aren’t changing their campaigns. Instead, they’re working to make sure people are aware of the runoff election and actually vote.

“I'm just hoping that we can get the word out to generate votes and have people come and vote because it is very different for people to be voting on one position that they might not know either candidate or know what the position is,” Horan said.

Horan has had many roles in SGA, including class president for the class of 2022, over her three years at Elon. She wants to increase SGA’s transparency.

“VP is a role that I never even really considered because I was so intimidated by it,” Horan said. “I think that the secret to success with VP is there needs to be a balance between professionalism and seriousness, but also approachability.”

Yoon has never served on SGA, but said an outside perspective is needed to make legislation more inclusive.

“I've been able to, instead of spending these last three years in SGA, been able to spend more time with people outside of SGA and learning what like potential people who are also a part of the student body, whose voices should be heard, want and need and really want to see,” Yoon said.

Both Horan and Yoon say win or lose, they still plan on being involved with SGA.