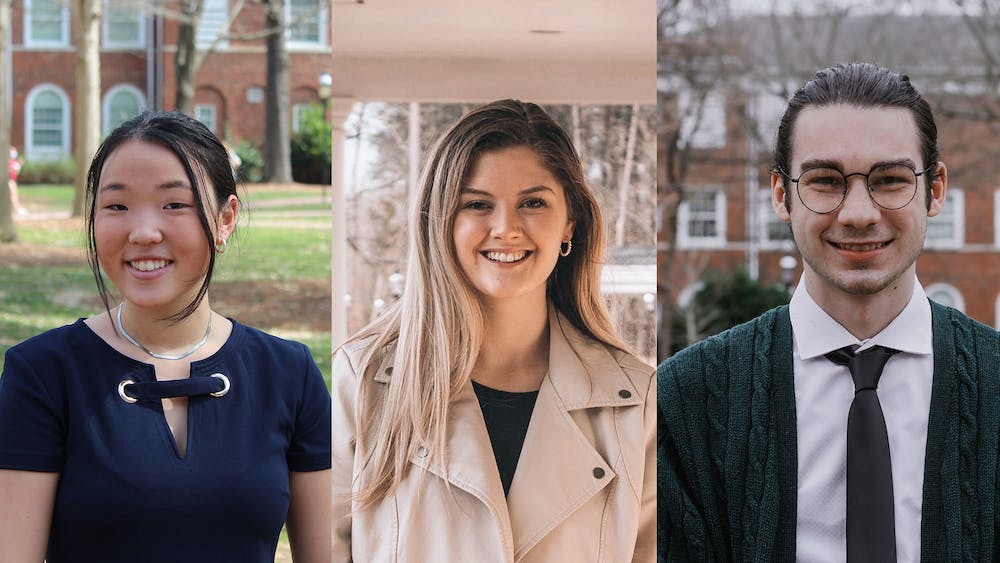 The executive vice president serves as the speaker of the senate and only votes on legislation in the case of a tie. They can also call any special meetings of the senate, and appoint senators to senate committees, as well as committee chairs.

Molin is currently the assistant to the vice president and class of 2023 vice president and served as class of 2023 senator last year. In his time in SGA, he’s worked closely with current VP Jonathan Stettler and his predecessor Louisa Sholar. This past semester he worked on changing the bylaws of the constitution and hopes to usher in those changes.

“I’ve been working with Jonathan a lot, especially after J-Term that really ramped up with the constitutional changes,” he said. “I started to take a bigger and bigger role with the vice president’s work and I started to feel like this is something I want to do moving forward.”

He views the vice presidential position as one that is internally focused and “inherently SGA,” someone who knows the bylaws and procedures inside and out. The position of vice president is often misunderstood, even in SGA, and Molin said he hopes to clarify that for the student body and the Senate.

Molin is running in hopes to make SGA more transparent, the Senate more inclusive and to serve as a facilitator for discussion in the senate. He said his role as Elon Votes co-coordinator helped him to leave his biases at the door, a skill he said will help him to facilitate the senate better.

“I’m currently the co-coordinator of Elon Votes and I think that would be a big help to me,” Molin said. “We’re non-partisan and that’s something I pride myself on in that role, being able to take a step back and check my beliefs at the door.”

If elected, he plans to look at the bylaws, organization council and committees more closely and make changes as necessary. In particular, he’d like to continue the expansion of the private task force. It is currently made of senators who meet monthly to discuss student concerns, infrastructure, DEI, civic engagement, safety and the SGA constitution.

Yoon is running with diversity, equity and inclusion at the forefront of her campaign. Her slogan — “affirming that everyone at Elon can bELONg” — comes from her own, as well as others’, experiences of feeling excluded on Elon’s campus. Her passion for DEI has led to her involvement in multiple student committees, including the President’s Student Leadership Advisory Council.

“At the end of the day my voice was being heard but I didn’t know if it was being taken into action. I didn’t know where those thoughts and ideas were going and if they deeply resonated with those people at the end,” said Yoon. “I wasn’t seeing the change I wanted to see.”

She has not previously been involved in SGA and said that it is part of the reason why she is running.

“We need to bring more perspectives to the table and I saw that there was a need for that in SGA,” Yoon said. “I was like alright I’m doing it, I’m running.”

Yoon also said that her candidacy as the only person of color running for executive office is important for breaking down barriers.

Yoon is a secondary english education major with minors in policy studies, poverty and social justice and teaching English to speakers of other languages.

Her involvement on campus has centered around the School of Education where she has served as an ambassador, been on the leadership board of Teaching Fellows and worked in the Curriculum Resources Center. In these roles, Yoon said she has supported DEI initiatives such as representation in curriculum and recruitment for fellows from diverse backgrounds.

If elected, she first plans to work with the administration and the student body to create a more transparent line of communication between the two, with an emphasis on mental health.

“It’s harmful to mental health when you don’t have these direct lines of communication,” Yoon said. “Students need empathy and they need to feel like they’re being heard. I think that’s one of the gaps we’re missing, there is some level of disconnect that we are not understanding each other.”

She also wants to encourage all students to use their voice, regardless of their connection to SGA.

Horan, a junior, has served as class president, vice president, senator, assistant secretary and club sports/athletics senator within SGA. She said these roles are what helped her to understand the different departments and students that make up the organization. She is a biochemistry and public health major, with a minor in business administration.

“I’ve been on SGA since my freshman year and it’s given me a place where I feel like we are doing really incredible things, but it’s also shown me that no one [students] knows what’s going on there,” Horan said. “There’s a major communication barrier and it shouldn’t be that way.”

According to Horan, even when legislation is sent out before SGA meetings, the formal layout can be confusing to those who aren’t used to it.

“One of my thoughts is to have a full initiative tracker with the date, who the author was and the actual legislation,” Horan said, which would utilize SGA’s new website. “If someone wants to make a piece of legislation, they could make a thirty second video and give a brief rundown, and then at the bottom you could click a button and ask questions.”

This past year Horan organized “Motivational Mondays” in SGA, where students are paired with each other and send quick, uplifting messages to their partner. She hopes to extend this to the student body, particularly freshman, if there is enough interest.

If elected, Horan would like to open a dialogue about the academic calendar, particularly the treatment and lack of break days. From personal experience, she said break days are often spent in McMichael and Belk Library catching up on work or studying for tests. Whether it be a departmental or institutional change, she’d like to ensure they are used for rest and relaxation.