Elon University police signed onto the annual mutual aid agreement, but a proposed amendment to address social justice and policing practices was rejected 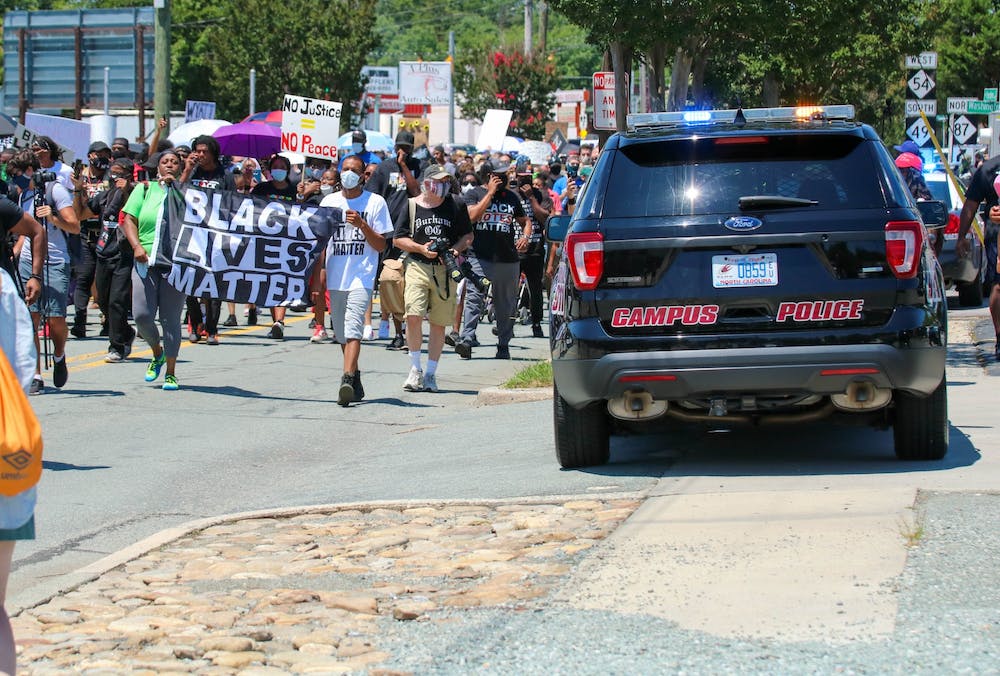 
Elon University Campus Police seen at the Burlington-Alamance March for Justice and Community on July 11, in Graham, North Carolina responding to a mutual aid request.

Elon University’s proposed amendment to the 2021 Annual Alamance County Mutual Aid Agreement between local law enforcement groups was rejected by those agencies, leading the university to use “direct communication” regarding aid requests instead. The amendment to the agreement would have addressed social justice and equity initiatives with regard to policing.

The proposed amendment isn't "under consideration at this time” after discussing it with local law enforcement, according to Steven House, executive vice president of the university and chair of the mutual aid review committee.

House said the committee decided that communication with law enforcement agencies regarding mutual aid requests is how the university will address issues within the agreement.

“The committee decided that direct communication with leaders of the other law enforcement agencies would be most efficient and effective way to define the role of EUPD in mutual aid situations and in advancing community relations,” House wrote in an email to Elon News Network.

The new plans and proposed amendment comes after the annual agreement came under scrutiny when campus police responded to multiple requests for aid at the Confederate monument in Graham last summer.

This past fall, the committee to review the mutual aid agreement recommended that the university stay in the agreement in case an emergency or disaster happened on campus. If some emergency were to happen on campus, the committee found that university police would need additional aid from other law enforcement agencies.

The Elon amendment also says the university will not provide mutual aid to protect the Graham Confederate monument or court square. EUPD will, however, provide traffic control in the area or assistance if there’s “extreme threat to life or property.”

The Elon amendment would have been added to the 2021 agreement that the Elon University Police Department and eight other law enforcement agencies in Alamance County signed.

According to House, Chief of Elon University Police Doug Dotson said the university won’t provide “direct protection” of the Confederate Monument and will evaluate assistance related to it even though there is no formal amendment.

The university will also still provide some of the support laid out in the amendment, according to House. EUPD still plans to develop programs and offer support and resources regarding policing goals.

“Chief Dotson has communicated with the other agencies about EUPD’s intention to offer support, resources and professional development training opportunities to advance racial equity and social justice goals for all agencies in the community,” House wrote.

Additional scrutiny regarding the mutual aid agreement came after a lawsuit claimed the city of Graham, Graham police and the Alamance County Sheriff’s Office were prohibiting people's ability to gather and protest at the Confederate monument and court square.

Some law enforcement agencies in the annual agreement find that the amendment would have been unnecessary for their department.

Graham Police Chief Kristi Cole said in an email to Elon News Network that the annual agreement that’s already been signed addresses “all of the issues we need legally for mutual aid.”

Cole did not respond to Elon News Network’s call or email for further explanation.

Assistant Police Chief of the Burlington Police Department Brian Long said his department already has their own set of goals they would like to address.

“We already have our core values and how we interact with the community with ensuring that we maintain trust and we don’t cause harm and all of these things that are embedded into [us] as an agency,” Long said.

The sheriff’s office declined to comment further than confirming that they did not sign the proposed agreement.

The Alamance County’s Sheriff’s Office, town of Elon, Graham, Burlington and Mebane police departments have not signed the proposed Elon amendment, according to representatives from the respective departments. The Gibsonville and Haw River police departments did not respond to Elon News Network’s request for comment.