Elon University Police is in a mutual aid agreement with Alamance County law enforcement, which requires them to respond when aid is requested by other departments such as Graham Police requesting aid at the Confederate monument 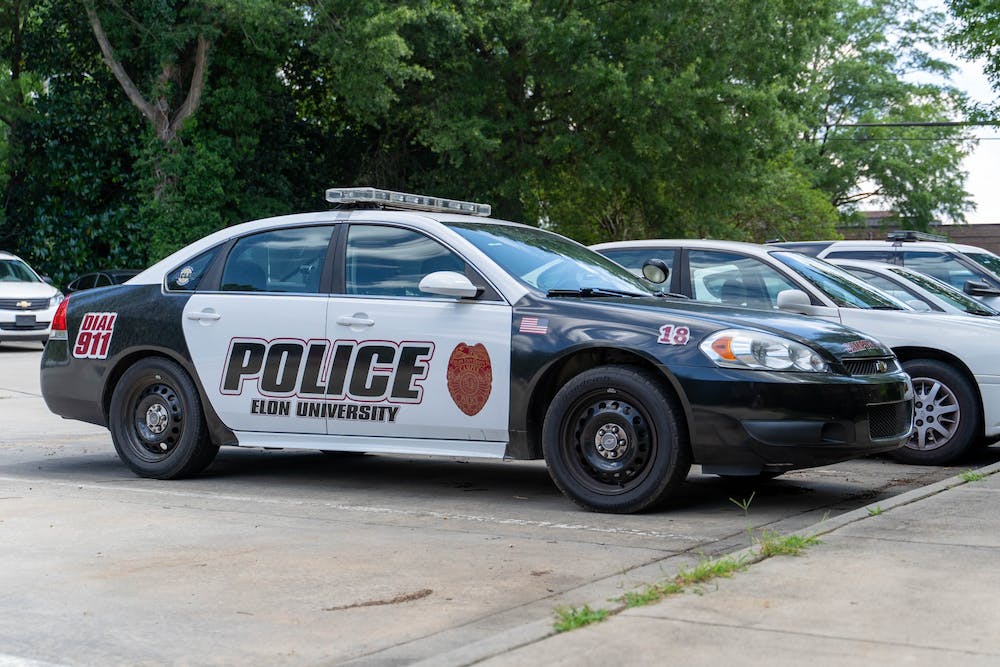 The current mutual aid agreement between Alamance County agencies started Jan. 1, 2020 and ends Dec. 31, 2020, per the agreement. According to a statement from Gerald Whittington, senior vice president, Elon University Police has been in a mutual aid agreement with local law enforcement since the 1990s.

According to documents requested by Elon News Network, Graham Police filed a written request to Doug Dotson, interim director of campus safety and police, on June 26 at approximately 7 p.m. to provide the total number of available officers.

“We anticipate a crowd size of 500-1000 people congregating primarily around the historic courthouse and the Graham Police Department,” the request says. “We are expecting those with opposing views to show up as well.”

Elon University Police responded to a request for aid from the Graham Police Department at the Confederate monument in front of the courthouse on Saturday, June 27. According to Whittington, eight Elon University police officers arrived at the courthouse at 10 a.m. A press release from Graham Police says the department was made aware of a peaceful protest without a permit, which was dispersed. However, a separate group was planning a protest they believed to be violent.

The city of Graham extended its state of emergency declaration on  June 27. The amended declaration imposed an 8 p.m. curfew “due to the potential for damage or injury, due to civil unrest.”

According to multiple press releases from the Alamance County Sheriff’s Office on the previous day, Graham would not be granting permits to protest at the courthouse for the “foreseeable future.”

The Graham Police Department is responsible for permit applications in Graham for group demonstrations, which is defined in the city’s code of ordinance as two or more people protesting. No protest is allowed on public property without a permit, according to Chapter 18 Section VI of Graham’s code of ordinance.

“No parade, picket line or group demonstration is permitted on the sidewalks or streets of the city unless a permit therefor has been issued by the city; provided, however, that nothing in this section shall be construed to prevent the peaceful assembly of any group for orderly expression or communication between those assembled,” the ordinance says.

The ordinance authorizes the Graham chief of police — or Graham’s  highest-ranking officer in their absence — to deny a permit.

“ [The chief of police can] refuse to issue such permit when the activity or purpose stated in the application would violate any ordinance of the city or statute of the state, or when the activity or purpose would endanger the public health or safety, or hinder or prevent the orderly movement of pedestrian or vehicular traffic on the sidewalks or streets of the city,” the ordinance says.

The American Civil Liberties Union of North Carolina sent a letter to the sheriff’s office over concerns about the denial of protest permits. The ACLU’s letter demanded that the sheriff’s office retract the permit denial, teach law enforcement officers about protected speech and affirm the right to “gather and demonstrate peacefully in Graham without a permit.”

“Your threat to arrest people for protesting without a permit, as well as the indefinite blanket refusal to issue permits, violates the most fundamental constitutional rights to assembly, speech and to be free from unlawful seizures and use of excessive force without due process of law,” the letter says.

In regards to the mutual aid agreement, Whittington announced that he, Academic Council chair Lee Bush, Staff Council chair Doug Purnell, Interim Director Dotson and the university’s legal counsel, along with other representatives to be appointed, are reviewing the mutual aid agreement and the best practices for campus police when working with other law enforcement agencies.

“Mutual Aid agreements among law enforcement agencies are essential to ensuring public safety,” Whittington wrote. “No single agency can have the staff and resources it would need to handle major emergencies that threaten the safety of our community or manage the demands of large-scale events.”

Interim Director Dotson did not respond to Elon News Network’s request for comment on the capacity of Elon University Police Department to respond to emergencies on campus without the mutual aid agreement.

However, Dotson did mention in a previous interview with Elon News Network on June 16 the multiple responsibilities of campus police.

“They have the responsibility to enforce the laws and that sort of thing, they do engage in the function of patrol in some enforcement action, but a lot of what we do also includes trying to do some community outreach,” Dotson said. “I think [outreach] is just a parcel of what police agencies should be doing.”