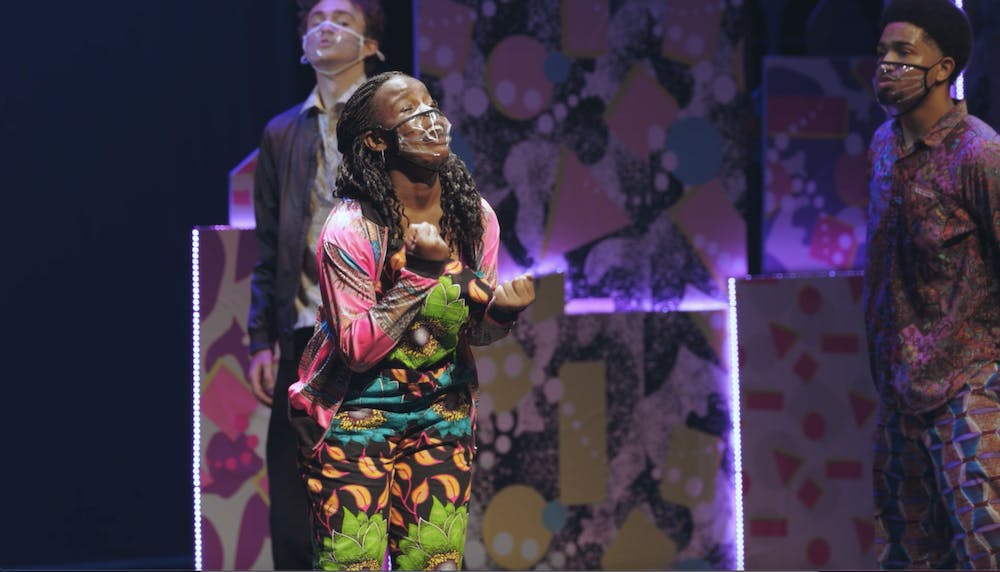 Christine Wanda performs as the lead role in “The Bubbly Black Girl Sheds Her Chameleon Skin,” this year’s winter musical. The vocals for the performance were prerecorded and performers wore clear masks on stage to lip-sync. Photo courtesy of Elon iMedia.

Originally produced in 2000, the musical is a semi-autobiographical musical about Viveca Stanton, a Black girl growing up in 1960s California. The show follows her through three decades as she grows up and tries to make it on Broadway, all while combating prejudice and industry stereotyping.

“This story talks about an experience that a lot of Black women go through, and it’s a way to tell history about not just women in general, but specifically Black women,” Sims-Winfrey said. “I feel like a lot of the times a lot of feminists or women’s movements tend to leave out Black people, and it tends to be catered to more white women.”

Sims-Winfrey served as associate dramaturg, meaning that her job was to discover as much about the show as possible. A website developed by Sims-Winfrey and professional dramaturg cfrancis blackchild allowed viewers to explore the key cultural icons associated with the show. As dramaturgs, their role was to add the historical context important to understanding the show, said Sims-Winfrey, who created the website to immerse the audience in the era.

"With this show, I so clearly saw my heart and soul in it just completely.I felt like I was reading a biography of myself from early childhood up until where I am today, even, and I felt like I was seeing distant memories of myself in first grade with like, the white students around me."

Elon senior Christine Wanda played the lead role of Viveca and said she’s never felt a resemblance to a character like this before.

“With this show, I so clearly saw my heart and soul in it just completely,” Wanda said. “I felt like I was reading a biography of myself from early childhood up until where I am today, even, and I felt like I was seeing distant memories of myself in first grade with like, the white students around me.”

Wanda said she led conversations after each rehearsal as a therapeutic practice to help actors who may be bothered by playing an intense role. The technique she applied is called “de-roling” and is used in theatrical intimacy to help actors separate themselves from the role they play on stage. Examples of de-roling techniques include shaking the limbs and body to remove the character from oneself, or handing back a prop or costume piece at the end.

“There are so many truthfully traumatic things that happened within the show, that no one wants to go back home and then be thinking about or have that live inside of them,” Wanda said.

Director Julio Matos said he knew he wanted a show that was written by an author of color that provided opportunities to the Black, African-American and Afro-Caribbean student communities at Elon.

“I’m looking to tell the story, they’re helping make sure that the story that I’m seeing is the story that we want to be told and is told through a female character’s perspective,” Matos said.

Freshman Amaya Sheffield attended a watch party for “Bubbly,” and found herself resonating with the women in the show.

“Knowing that it’s Women’s History Month, I think I’m more aware of how all the women in the show had their time to shine,” Sheffield said. “Being able to show their talent, especially women of color … in the Elon show is just really nice.”

Elon alum and music director Dan Gibson ‘09 knows the playwright, Kirsten Childs, from his graduate studies at New York University. He said the music in the show has gospel, funk and classic Broadway influences.

“The ability for a composer to write about their life and to allow themselves the complexities and allow themselves to dig in musically to what it’s really like to go through these experiences, I think, is really quite a feat that she accomplished,” Gibson said. “And I think that’s why it resonates with so many people.”

Stage manager Allyson Vogel said she hopes audiences will get a more political message from the piece and believes it is more important than ever.

“I want it to serve as a reminder for those who see the show that those issues are still real, and you can’t just let them go,” Vogel said. “Just because, yes, the world has changed in some ways, you still have to keep fighting for those issues because those are still happening in this world.”

Above all, the cast and crew want one message to be received: joy. After a difficult year, Matos hopes this piece will bring a moment of “light” into the world and remind audiences to keep creating art.

“I just want us to bring some joy to the world for a little bit,” Matos said. “It is just a fun, happy piece, and I want us to keep putting out that energy especially during this time.”

Bringing discussions on intersectionality to students

This year’s show fulfills a graduation requirement for participating students, which has never been done before.

Community Outreach Coordinator and Elon sophomore Giselle Watts said she loved the idea of turning this year’s winter musical into a service experiential learning credit when it was first introduced to her by Matos.

Students need two experiential learning requirements to graduate and service learning is one of five ELR options. Tammy Cobb, the associate director for community partnerships at the Kernodle Center for Civic Life met with Watts to figure out what ELR work would look like, who the performing arts department would be partnering with and when the community outreach program would take place.

The end result was cast members teaching elementary and middle school students at the Boys and Girls Club and CityGate Dream Center in Burlington about racism inside and outside of the arts.

Watts said she and the other volunteers tried to keep the material on the lighter side because this year has been challenging and most of the kids present were students of color.

“Even though ‘Bubbly’ is called ‘Bubbly,’ it talks about some really deep and dark topics,” Watts said. “But it introduces it in such a really great way.”

Watts and the cast also performed numbers from the show and taught choreography to the students. She said her goal was to get kids moving because they spend all day doing school virtually.

“We probably only taught them like four steps of the dance because they were so excited and just kind of wanted to just play with us and get to know us,” Watts said.

The older kids were able to pay more attention, but were hesitant to dance in front of others. But Watts said the message they were trying to instill in the kids is embracing one’s true self.

“It was really cool to be able to encourage them and to show them like, hey, it’s totally OK to mess up,” Watts said. “We’re just learning these steps and we’re just teaching you to have fun.”