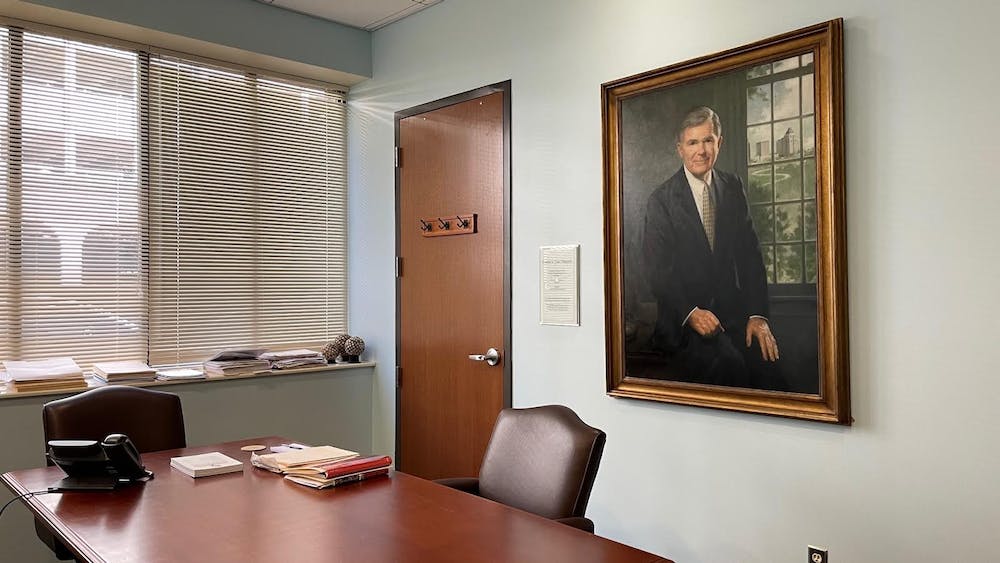 The Elon University School of Law has refused to remove a portrait of former Mayor of Greensboro Jim Melvin after students requested the painting be taken down, a representative for Elon University said.

The painting originally hung in the Cemala Foundation Commons at Elon Law in Greensboro but was moved to a private conference room in the dean's suite as part of "a planned remodeling of the law school's second floor in July," according to a statement by Elon University.

The students' issue with the painting ties back to Melvin's comments over a 1979 Greensboro shooting now known as the Greensboro Massacre.

The shooting occurred at a “Death to the Klan” rally put on by members of the Greensboro Communist Workers Party on Nov. 3, 1979, during Melvin’s tenure as mayor. Armed members of the Ku Klux Klan and American Nazi Party arrived and shot into the crowd. Five people died and 10 others were wounded.

The city of Greensboro issued a formal apology for its handling of the event in a 2020 city council resolution, recognizing the shortcomings of leadership at the time.

The Greensboro Police Department, “along with other city personnel failed to warn the marchers of their extensive foreknowledge of the racist, violent attack planned against the marchers by members of the Ku Klux Klan and the American Nazi Party,” the resolution said, adding that “numerous factors have contributed to an atmosphere of blaming the victims of the Greensboro Massacre rather than encouraging an objective investigation and comprehensive trial process.”

Melvin has gone on the record expressing different opinions about what happened. In a 2015 interview with the Greensboro News & Record, Melvin said although he sympathized with the victims of the attack, he would not use the term “massacre” to describe it, and “the [Communist Workers Party] picked a fight” even though he said they never intended to be killed.

Two of the students leading the charge to remove the painting, Madison Fields and Paris Henderson, take issue with his previous comments on the attack.

“We’re celebrating a man who contributed to the erasure of an entire massacre,” Fields said.

The request to remove Melvin’s portrait was initially part of a list of demands in a letter sent by Fields, Henderson and a host of other law students to Elon Law’s administration last summer following the deaths of George Floyd and Breonna Taylor. The letter asked the administration to become more proactively anti-racist, including by removing “any paintings and photographs of historical perpetrators of social injustice and racial inequity currently present at Elon Law.”

Many of their demands have been met, such as the hiring of Laké Buggs, the new director of inclusive excellence for graduate and professional education. But Melvin’s portrait is still an issue, according to Fields and Henderson.

There have been several meetings discussing the issue of the portrait’s removal, said a representative for the university. Ultimately, the university decided not to take it down.

Clash between the Communist Workers Party and American Nazi Party and KKK results in five deaths and 10 injuries, coming to be known as the Greensboro Massacre.

Administration moves the portrait from the Cemala Foundations Commons to a conference room in the dean's suit.

In an email from Nov. 3, 2020, obtained by Elon News Network, Dean of Elon Law Luke Bierman wrote that the painting was moved to the conference room “that is more private and appropriate to the circumstances while additional consideration is given to this matter.”

But according to Fields and Henderson, removal of the painting was the goal, not relocation.

“Can you imagine someone perpetuating a violent act against a family member and having to know that that person is hanging in infamy inside a law school in your own city to be glorified?” Henderson said. “How dare we minimize life, because at the end of the day, you have a picture and you have someone’s life. It’s always gonna be life first for me, personally.”

Others have also spoken out about the law school’s handling of the issue. On Nov. 2, 2020, Elon professor of law Catherine Dunham wrote a letter to Bierman about the situation.

“The issue for Elon Law is not what exact role Melvin played in this chapter of Greensboro’s history,” Dunham wrote. “Rather, the issue is how we respond to our students when they identify a portrait, one displayed in our shared space, that serves as a tribute to a person who has expressed a racist ideology.”

The Elon Law Student Bar Association posted an online petition requesting the removal of the portrait. The petition has 157 out of its 200 signature goal as of March 2. The petition states that Elon Law “prioritizes profits over principles” given its refusal to remove the painting.

Melvin has long been involved with Elon, going back to before the law school’s 2006 founding. In his role as the president of the Joseph M. Bryan Foundation, Melvin led a $10 million fundraiser for Elon Law, according to a 2004 column in the Triad Business Journal.

The portrait was unveiled during the law school’s dedication ceremony in 2006, according to a statement by Elon University.

Administration recommended that Fields and Henderson read the university’s History and Memory Report released last fall, the students said. But they still don’t feel like they have hope of any concrete solutions.

One of the recommendations outlined in the report is to “develop and implement a new procedure for naming and renaming spaces.” According to a representative for Elon University, the new Division of Inclusive excellence is “in the early stages of developing new processes and adjusting existing processes” for concerns related to diversity, equity and inclusion, but there is not yet an anticipated timeline for this work to be complete.

Now, nine months after initially sending a letter to Elon Law’s administration, Fields and Henderson said they are frustrated with their progress in getting the painting taken down.

Moving forward, Fields and Henderson said they plan to continue speaking about the issue as well as contacting survivors of the 1979 attack.

“I’m more passionate about it today than I was,” Henderson said. “These people that lost family members are still alive. They matter. That picture does not matter.”