Elon football falls to Richmond in third loss of the season 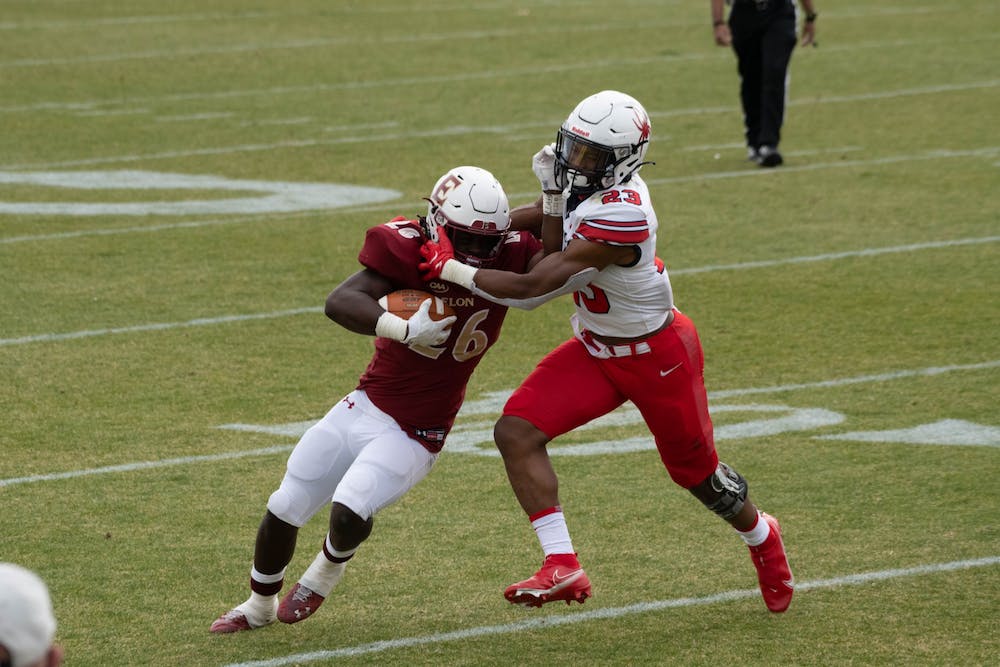 Elon University’s football team (1-3) suffered its third straight loss of the spring season against the University of Richmond (2-0) on Saturday, ending with a final score of 38-14.

A low time of possession and miscues on offense were huge factors that affected the Phoenix. Elon’s two quarterbacks — freshman JR Martin and redshirt freshman Justin Allen — combined to throw three interceptions while the Spiders controlled the ball for over 40 minutes in the game.

Richmond’s offense had a quick start to the game against the Phoenix, scoring two touchdowns within the first 10 minutes of the game. The scoring began on their first drive when Richmond’s redshirt senior quarterback Joe Mancuso found redshirt sophomore wide receiver Justin Jasper for a 10-yard touchdown pass.

Elon failed to answer when Martin was intercepted by linebacker Tyler Dressler on the second play of the Phoenix’s first drive. The Spiders capitalized on the short field position when Mancuso ran for a 1-yard score on fourth down.

Elon started to find their stride on their second drive when Martin found freshman wide receiver Chandler Brayboy 36 yards down the sideline. The Phoenix’s first score of the game came with 1:26 left in the first quarter when junior wideout Jackson Parham hauled in a 25-yard touchdown pass from Martin.

The Spiders offense brought the lead back to 14 when Mancuso tossed his second touchdown of the game, this time to redshirt junior Leroy Henley. Richmond went into halftime with a three-possession lead after sophomore kicker Jake Larson nailed a 44-yard field goal with 1:37 remaining in the second quarter.

In the second-half, Trisciani replaced Martin with Allen at quarterback, marking Elon’s fourth quarterback change this season. Elon was forced to start Martin last week against James Madison University after both senior Davis Cheek and redshirt sophomore Joey Baughman were out with injuries.

“When I watched JR out there today, I felt like he was struggling to make a decision, really,”  Trisciani said. “Scrambling, getting flushed from the pocket, throwing the ball away isn’t going to get us down the field. So I wanted to give Justin a chance to go in there and see if he could process some things, make some decisions and see what he can do.”

The ground game opened up for Elon on Allen’s first drive when junior running back Jaylan Thomas found a hole and ran free for 40 yards before finally getting stopped in the red zone. Elon’s offense then stalled out as they turned the ball over inside the five on a failed fourth-down conversion.

After a scoreless third quarter, the Spiders recorded their second interception of the game when defensive back Tyrek Funderburk picked off Allen on Elon’s own 15-yard line. Running back Aaron Dykes immediately took advantage of the turnover, trucking his way to a 15-yard touchdown on the second play of the drive, pushing the score to 7-31.

Following the touchdown, the Phoenix found a little spark when Brayboy returned the kickoff 43 yards to the Spider’s 47-yard line. In the next play, Allen found a wide-open Jordan Bonner, who took the ball all the way to the end zone, giving Allen his first career Elon touchdown.

However, just when the Phoenix seemed like it was heating up, Allen threw his second interception of the game on the next drive to linebacker Xavier Marshall with 9:49 remaining in the fourth quarter. Richmond was able to chew 9:35 off the clock before walking in for a one-yard touchdown, making the final score 38-14.

Up next, Elon will travel to Williamsburg, Virginia on Saturday to take on The College of William & Mary at 4 p.m. for their first conference road matchup of the season. Elon will get another opportunity to take on the Spiders on March 27 when the team travels to Richmond.