'It genuinely broke my heart': Elon community denounces anti-Asian hate in the U.S. 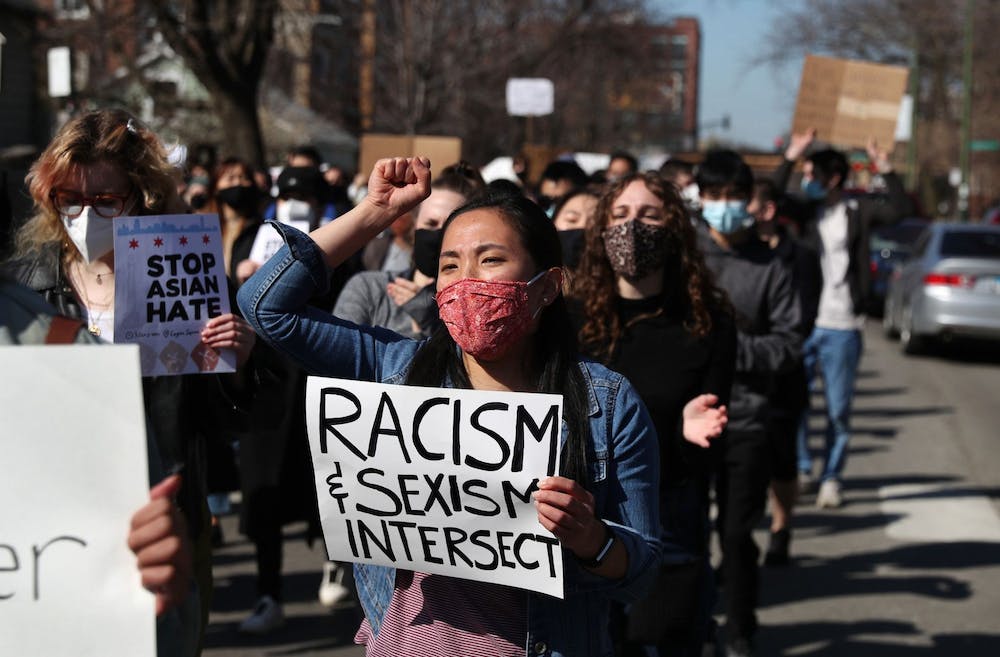 People rally against Asian hate during a march and protest in the Logan Square neighborhood on March 20, 2021. (Chris Sweda/Chicago Tribune/TNS)

Junior Ethan Gabriel already knew what it was like to experience anti-Asian discrimination before the lethal Atlanta spa shootings that occurred March 16.

“From personal experience, my mom and I will go grocery shopping, and then you see people just completely take a few steps away,” Gabriel said. “Or my mom would cough, and they’ll just go the other way. It’s one of those things where I’m just like, ‘that sucks.’”

Gabriel, who identifies as multiracial with a Chinese, Filipino and Black background, took a deep breath as he described the heartache he felt after the Atlanta spa shootings.

Over the past year, the United States has witnessed an increase in hate crimes against Asian Americans. The Center for the Study of Hate and Extremism at California State University-San Bernardino reported data showing a 149% spike of anti-Asian violence in 16 of America’s largest cities.

The surge of Asian hate crimes just this month includes the Atlanta shootings and the killing of 75-year-old Pak Ho, an Asian man who died after he was attacked while going for a walk in Oakland, California.

Authorities in Cherokee County, Georgia have not yet officially labeled the spa shootings as a hate crime due to the perpetrator’s claims of sexual addiction, which has sparked controversy and outrage from members of the Elon community.

“Fetishizing Asian women is also racist and part of white supremacy,” Harter wrote in a statement to Elon News Network. “It is important for all of us to denounce hate and violence directed against Asians and Asian Americans and to commit to learning about and dismantling this racism and white supremacy.”

Junior Alyssa Meritt, who identifies as a multicultural Asian American woman and serves as the president of Elon Maintaining Pan-Asian Respect, Equity and Social Service said the acts of racial violence have left many people in the Asian community feeling frustrated.

“My reaction to everything that’s been happening has been a little bit mixed for the sheer fact that this has been going on for over a year,” Meritt said. “The whole issue of anti-Asian sentiment has been going on my entire life.”

Asian hate crimes have increased since the onset of the coronavirus pandemic, and Asians have been victims of racist rhetoric and xenophobia. Research released by the Stop Asian American and Pacific Islander Hate organization shows there have been reports of 3,795 racially motivated hate incidents against Asian Americans from March 19, 2020 to Feb. 28, which include verbal harassment, physical assault, shunning and discrimination in public settings and online bullying.

“I remember that one social media event that happened as soon as we got sent home, and someone made a social media post about ‘China-virus’ or ‘Kung flu,’ that’s what it was. The fact that I remember them both is really terrible,” Gabriel said. “But it was actually very reassuring to see student support who understood why this was wrong. But then, unfortunately, there are people who came into defense of that student.”

Gabriel was referring to an Instagram post made last year by a recent Elon graduate which included racist comments to describe the coronavirus pandemic.

“Kung Flu cut it short,” the Instagram post said in reference to Elon students being sent home for remote learning last spring due to the pandemic.

The student also posted: “I don’t condone that at all. If it originated from China, calling it the Chinese virus is 100% accurate. Some guy ate a bat sandwich and here we are.”

The university was made aware through student conduct reports. The former student did not respond to Elon News Network’s request for a comment.

Meritt advocates to raise awareness on campus and create solidarity. Through her position with EMPRESS, she said she has worked closely with other students and staff who are committed to diversity and inclusion but said there is a lot more work to be done at Elon.

of undergraduate students identify as Asian American, according to the Elon University 2020-21 fact book.

racially motivated hate incidents against Asian Americans from March 19, 2020 to Feb. 28, which include verbal harassment, physical assault, shunning and discrimination in public settings and online bullying, according to research released by the Stop Asian American and Pacific Islander Hate organization.

“Our history as a predominantly white university has led to a very stark gap between students of color on this campus and Caucasian students,” Meritt said. “I think that the way we bridge that is probably going to be events that aren’t just made for Asian students and are made for the whole campus.”

According to the Elon University 2020-21 fact book, only 2.4% of undergraduate students identify as Asian American.

“When we learned about the Atlanta murders, we immediately reached out to our Asian, Asian American and Pacific Islander students and colleagues to provide support,” Williams said in a statement. “They agreed with us that the Elon community should come together in solidarity to commit to ending anti-Asian bigotry, racism, xenophobia and other forms of oppression.”

Meritt hopes to see people unite to combat racism and create change in the future.

“We are humans,” she said. “We need to come together to fix problems of humanity, and this is 100% a problem of humanity.”