Football season at Elon University has started and according to CAA guidelines it’s up to individual teams to cancel games due to COVID-19 infections, but recommends teams meet a minimum roster to play 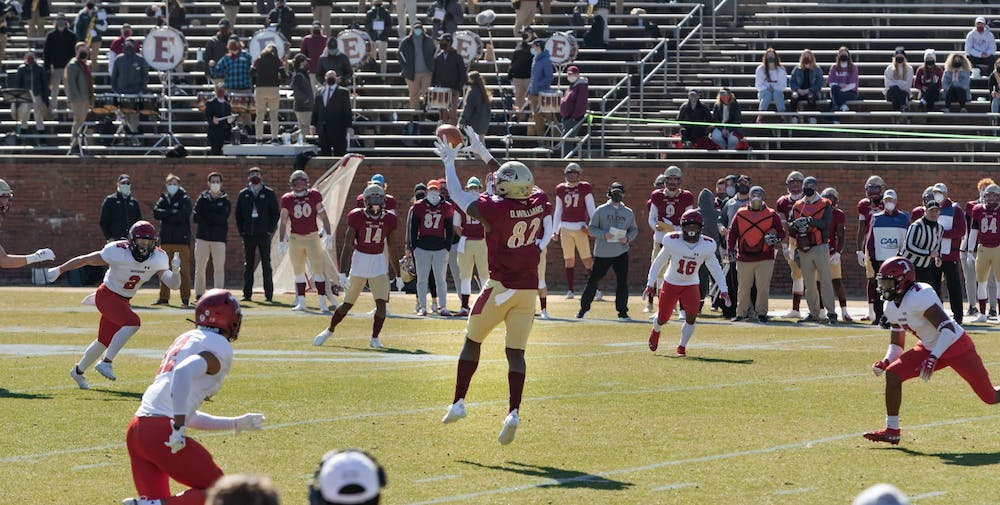 
Donovan Williams makes the leaping grab for the first down. The Phoenix beat the Davidson Wildcats 26-23 at the home opener on Feb. 20, 2021.

With a spring football season underway during the coronavirus pandemic, the Colonial Athletic Association has given guidelines to football teams on when games should be canceled or postponed due to COVID-19 infections.

CAA commissioner Joe D’Antonio said if a COVID-19 case arises, teams can decide whether or not to opt out of game play. There is no set mandate for how many players, coaches or personnel must test positive or be a close contact to require a canceled or postponed game, according to D’Antonio.

At least seven offensive lineman, one quarterback and four defensive lineman make up an eligible team to play a game. D'Antonio said that even if a team fails to meet these benchmarks, they can still choose to play the game. Once this is approved by the conference office, the game will either be moved to a later date or declared no contest.

Because football plays once a week for eight more weeks, there is less time designated for a makeup game. However, in Elon’s schedule, there is one open weekend on April 17 when a postponed game could potentially be rescheduled.

“An institution can look at those benchmarks and say, even though we don't meet them, we still think it's safe for us to play the game we're going to proceed forward,” D’Antonio said.

The CAA’s basketball protocols were based off of the Football Bowl Subdivision and Football Championship Subdivision conferences, the latter of which normally includes the CAA in its fall season. Both are subdivisions of NCAA Division 1. However, the ultimate decision to play in the spring was made by the presidents of the CAA.

DAntonio said he recognizes the unpredictability of the virus and how it could potentially cause issues with the football season.

“Unfortunately we don't control the virus; the virus controls us, as we've seen,” he said. “So there's not any kind of pixie dust that I can sprinkle on this and say, ‘we're going to have a miracle season here.’”