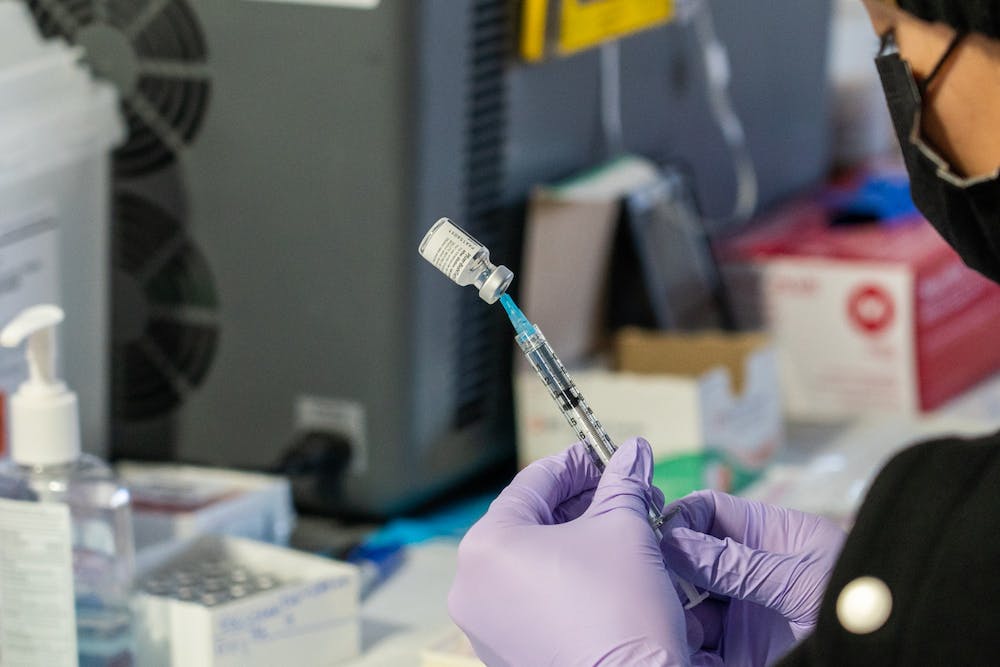 
An Alamance County Health Department worker fills a syringe with the Pfizer COVID-19 vaccine on Monday, Jan. 18 at the Career and Technical Education Center in Burlington, North Carolina. The health department administers both Moderna and Pfizer vaccine on different days depending on supplies.

Joe Hill, a 79-year-old resident at Twin Lakes Retirement Community in Burlington, woke up on Jan. 14 willing and ready to receive the first dose of the coronavirus vaccine. Hill is one of 800 residents at Twin Lakes who received the vaccine as part of the first phase of vaccine distribution within North Carolina, residents living in long-term care facilities.

“We know [frontline workers] are first in line basically to receive the vaccine, but the fact that we were able to get it just actually the same week as the folks in health care got it was really great,” Hill said.

Twin Lakes has been able to administer over 800 doses of the vaccine. All but one of the residents in their Memory Care facility, a state-certified program for adults with dementia, are now fully vaccinated.

According to the North Carolina Department of Health and Human Services, as of Feb. 9, over 46% of residents in Alamance County who are 75 years old and older have received the first dose of the vaccine.

North Carolina’s and Alamance County’s vaccine plans organize their populations into groups based on risk, with those in high-risk groups receiving the vaccine first. Currently, the vaccine is being administered to Groups 1 and 2, which include people who work in health care and those who work or live in long-term care facilities, such as Twin Lakes.

“[The residents] have some data entry they may have to do, but beyond that, there’s not a whole lot on their end right now that they have to do,” Kepley said.

Hill said he encountered no complications or difficulties with his vaccination appointment.

“I have nothing but praise for the leadership here at Twin Lakes and how they arranged this and made it easy for us,” Hill said.

On the other hand, clinics meant for older adults that are unaffiliated with private organizations like Twin Lakes have been facing different obstacles. On the Alamance County Health Department’s Facebook page, residents have commented on the inefficiency of the appointment process. Commenters have mentioned being left on hold for hours at a time or having their appointments canceled altogether.

Cone Health, another major distributor of the vaccine, recently had a shipment of doses canceled, affecting over 10,000 people who had been scheduled to receive the vaccine after Jan. 25. All appointments at the Greensboro Coliseum Special Event Center were forcibly rescheduled, with those who already had appointments remaining at the top of the waiting list.