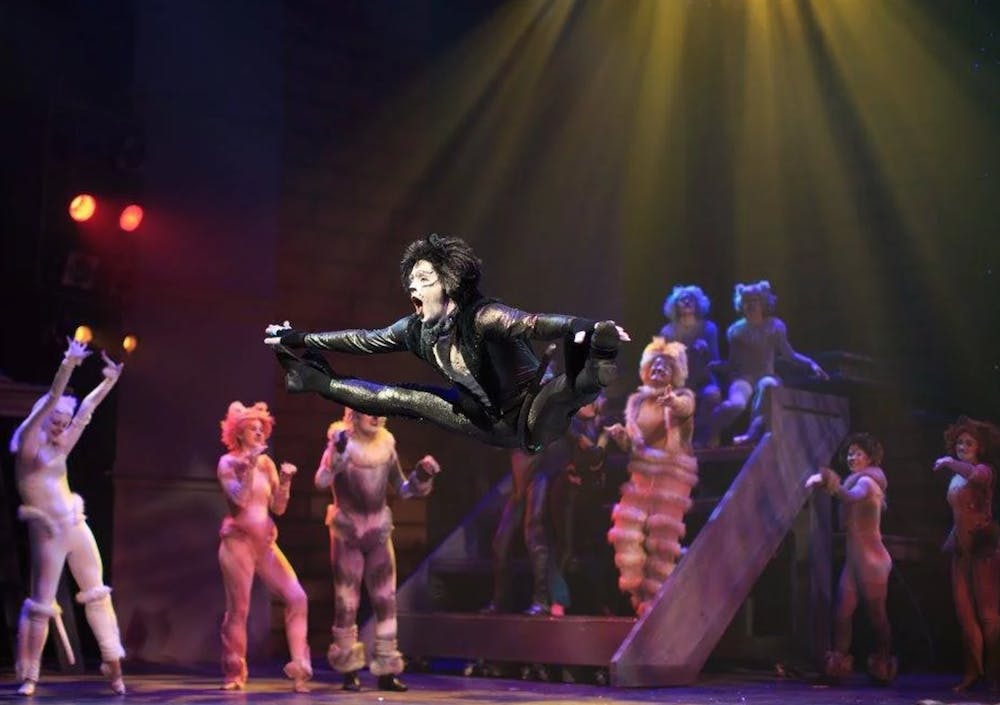 J.J. Niemann leaps high into the air in a 2016 production of “Cats” held in McCrary Theater. Photo courtesy of J.J. Niemann.

“Anyone can cook” may be the main message of the Pixar movie “Ratatouille,” but anyone can also create a Broadway production on a social media platform, as demonstrated by a TikTok trend that made its way to a virtual stage.

During a time where live theatre is at a standstill, Broadway professionals and TikTok creators partnered to bring “Ratatouille: The TikTok Musical” to life.

So far, the musical has raised over $2 million for The Actor’s Fund, a charity that supports workers in the performing arts and entertainment industries. The musical marked the largest fundraiser in the history of the fund, and most of this money will go toward emergency financial assistance and programs that offer health insurance counseling and career guidance to current and former workers in these industries.

In the first nine months of 2020, a total of 30,000 people were assisted by the fund’s grants and services. 70% of those supported last year were performers, with the other 30% being crew members.

The performance aired through TodayTix with over 200,000 tickets sold on Jan. 1. Its opening night success brought an encore performance to TikTok on Jan. 10 that gained 150,000 viewers. The show featured several Broadway and Hollywood stars, and each member of the ensemble has Broadway credits of their own — including Elon alum J.J. Niemann ‘17.

“When they announced that it was actually going to become a show and they were going to do a benefit concert, I was like, ‘Oh my gosh, I have to be a part of this,’” Niemann said.

His TikTok presence and prior connections with different departments of the musical helped him land his role in the vocal and dance ensembles.

This project was the first one that Niemann — who prior to the pandemic had been doing eight shows a week and performing full-time since graduating — booked since March. The cast met over Zoom the week of Dec. 21 in preparation, and Niemann attended the rehearsals virtually from his childhood home in Wilmington.

Since returning home, Niemann now pursues TikTok as a pastime and a way to stay in tune with his craft, creating video content for millions of viewers.

“It’s not like crazy money yet, but it depends,” Niemann said. “If I have a video that does really well and gets a couple million views — which happens pretty frequently — I can make 150 bucks in a day from that, which is wild.”

He called it a “mini part-time job” and also works as an online coach with the Broadway Collective, an educational program that connects music theatre professionals and students. Because of his steadily growing social media presence, Niemann said he’s been able to expand his client base and bring in more income.

Other alumni in the performing arts industry are getting creative with their employment. Elon alum Drew Redington left school when he was 19 to pursue his career, and since the pandemic began, he’s found himself fortunate to be employed, but still picking up babysitting and assistant jobs to put money in his pocket.

“It is survival job mode,” Redington said. “For some of us, you’re fortunate to where you can get a TV job. I was very fortunate to get [a job with] NBC and stuff like that, but that only is a week’s worth of work. It’s hard going back to finding other ways to make money.”

"It is survival job mode. For some of us, you're fortunate to where you can get a TV job. I was very fortunate to get [a job with] NBC and stuff like that, but that only is a week's worth of work. It's hard going back to finding other ways to make money."

Redington was in the ensemble of the “Mean Girls” musical and most recently performed with the cast in the Macy’s Thanksgiving Day Parade and NBC’s “One Night Only: The Best of Broadway.” “Mean Girls” announced on Jan. 7 that they will not reopen when Broadway resumes production, but Redington had put in his two-week notice right before the pandemic.

“Unfortunately, we’re not the first and we’re not going to be the last,” Redington said. “This is now my third Broadway show that I’ve closed and it is a part of the business. It is a part of our fairy tale of living in New York. It’s something we don’t ever really think about, but it’s very common.”

The Broadway League announced in October 2020 that the suspension on performances, which began in March, is extended through May 30, 2021. “Mean Girls” is one of five Broadway shows that announced they will not reopen, but there are 15 shows that are currently rescheduled to open over the course of this year.

Neither Niemann nor Redington have a definite answer as to when they think the curtains will rise, but both agree there is a heavy mental toll that comes with the uncertainty of unemployment.

Although they’re both still figuring out what to do with some of their newfound free time, Niemann said there are still silver linings to be found.

“I hope a big takeaway from this time will be that art can come from anywhere,” Niemann said. “I think people will trust new things that come about, maybe put themselves out there a little more, and maybe it can make theatre feel a little more accessible for people.”