After a month of almost no games, the Phoenix look to take leadership of a wide-open CAA 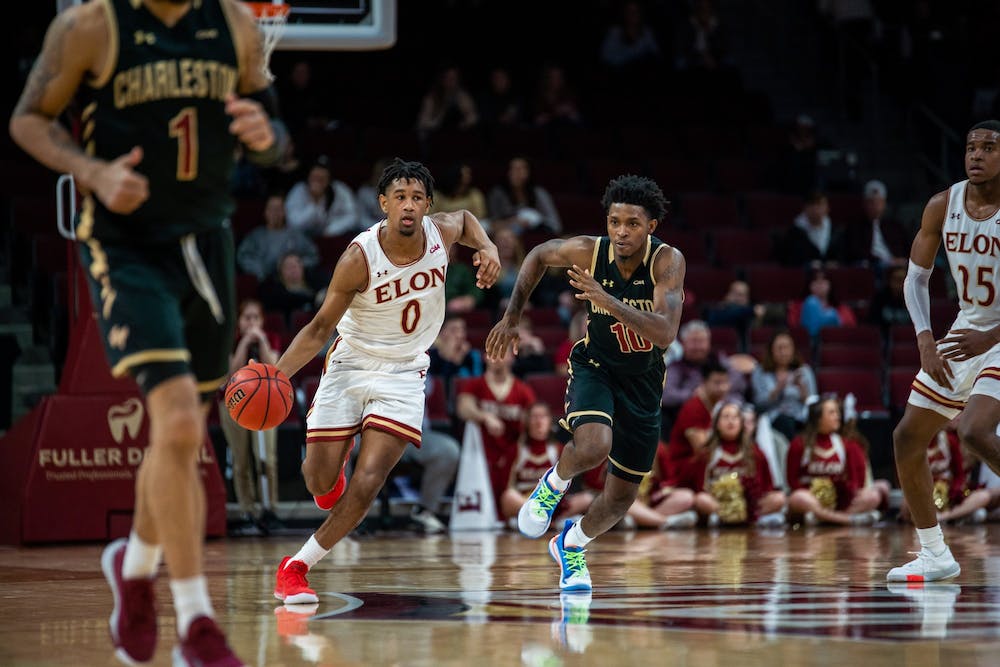 
Elon Univeristy freshman Hunter McIntosh breaks down the court against the College of Charleston sophomore  Zep Jasper in Schar Center on Thursday, Jan. 9, 2020.

Coming into the 2020-21 season the Elon men’s basketball team had much to live up to. But just like in many other parts of life, the coronavirus pandemic took over, sending the season into disarray. The Phoenix have been through a lot in the past three months, and this is where they stand now.

Elon men’s basketball (3-3, 0-2) is currently at the bottom of the Colonial Athletic Association. This ranking is misleading because the Phoenix have seen their conference schedule completely upended. The Phoenix play a conference opponent twice each weekend in order to limit travel exposure. They have had six games pushed back due to COVID concerns: two each against James Madison, Towson and Drexel.

Earlier this year, the Phoenix had positive tests within its men’s basketball program, which was a huge blow early in the non-conference schedule. The Phoenix missed the opportunity to play the University of North Carolina Chapel Hill and Duke University, the sixth-highest ranked team in the nation.

Playing these teams serve as a benchmark to where a team is talent-wise early in the year. Last year the Phoenix traveled to Chapel Hill to face the Tar Heels. The Phoenix were tied with the No. 5 ranked Tar Heels at halftime, in part because of the proficient 3-point shooting from their freshman guards and the inside scoring ability of graduate guard Marcus Sheffield. Both of those components would lead the Phoenix to success in 2019-20.

Being forced to cancel high-profile exhibition matches is one byproduct of the pandemic. Another is the mental challenge the schedule alterations pose. The Phoenix went 18 days without playing a game against another school. Long breaks like this can interrupt the flow of a given season, especially if a team is on a winning streak. Sophomore guard Hunter McIntosh said the team didn’t come in with the mindset that this would be a normal season.

“Coach [Mike Schrage] alluded to [it] at the start of the season, it wasn’t going to be a typical season, there might be a lot of unexpected things happening,” McIntosh said, following the team’s first break in schedule. “We just wanted to be thankful and grateful to be playing again.”

The Phoenix are currently in the midst of a 27-day break from competition in the middle of conference play. The team’s last matchup was a double-header against the Northeastern Huskies on Jan. 2-3. The Phoenix dropped both of those games and have not played since. After postponements, the Phoenix’s next potential game would be Jan. 30 at the University of Delaware. If the Phoenix take on the Blue Hens at the end of the month, it will be a full 27 days since its last game. Head coach Mike Schrage said that the time off is not an excuse this year.

“Every team is going through this. We can’t ever have an excuse,” Schrage said. “There are going to be teams in this country that go through these gaps and pauses and hopefully it will stop at some point and we’ll control what we can control like every team is trying to.”

Race to the finish

Last year, the Phoenix season was highlighted by an underdog run through the CAA Championship tournament. In Schrage’s first year as head coach, the Phoenix were able to fight to the semi-finals of the tournament despite having a lackluster 13-21 record.

The Phoenix effort was spearheaded by freshman shooters like McIntosh and Hunter Woods who have since blossomed into leadership on the team. This season McIntosh has carried the torch he shared with Sheffield last year. McIntosh is the overwhelming point leader this season. He averages 17.3 points a game and has 104 points in the limited time played. He also leads the team in 3-pointers (17), field goals (31), free throws (25) and assists (15). In a defining win this season it was McIntosh’s free throws that lifted the Phoenix over the High Point Panthers in a come-from-behind 76-75 win.

“[Sheffield] was a special scorer, and we’ll have to go to a few different guys,” Schrage said. “But Hunter McIntosh, every time he’s got space he raises up, he’s built for those moments.”

The loss of Sheffield has left the Phoenix without an older, physical style of player that can get to the hole. This year junior center Federico Poser has started to shine after a productive CAA tournament. Poser averages over seven points per game and has 20 rebounds this season.

Complementing and matching Poser’s physicality is one of the Phoenix’s new additions, redshirt junior forward Jerald Gillens-Butler. Gillens-Butler had to sit on the sidelines after transferring to Elon last year due to transfer portal restrictions. This year Gillens-Butler averages 15.7 points per game, second only to McIntosh.

With only six games under their belt through mid-January the Phoenix are behind compared to others in their conference. Towson University is the next closet with only seven games played but others have played over 10 games this season. In a turbulent year, the Phoenix can only focus on what is in front of them: Delaware at the end of the month.