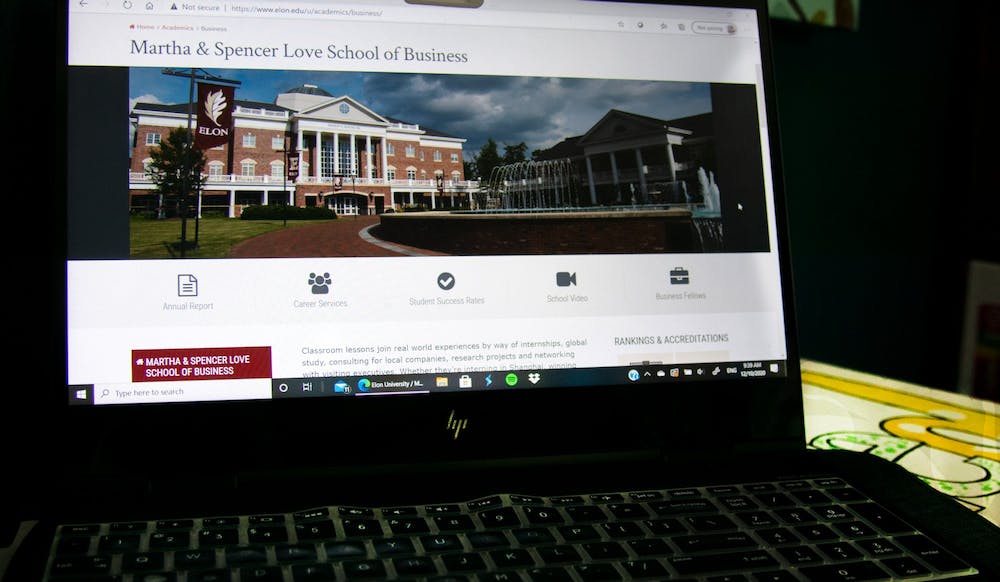 The Martha and Spencer Love School of Business at Elon University will require students to use a Windows computer for all business classes beginning in the fall of 2021.

This announcement came via email to all business students. The business school cites macOS compatibility issues as the reason for switching to Windows.

“We have received emails from incoming students going early decision at Elon asking what computer to buy,” Tadepalli said. “We want the transition to start this fall for the incoming class of 2025, but for students who are already here in the classes of 2023 and 2024, we said ‘don’t rush out and buy a new PC. There’s no need for that.’ It is when they’re off campus that it is a struggle.”

The announcement comes after the release of Apple’s M1 chip processor for Macs. The M1 chip is specifically designed for the Mac and combines multiple chips that both Macs and PCs use into one. Apple M1 versions of the Mac differ from Intel versions in speed, graphics performance and battery life. New Mac computers will all have the M1 processor, and although it may be beneficial for some Mac users, the email said that the new Macs “will be problematic for business coursework” in the business school.

The email also said Windows OS equipment is the predominant platform for business computing and purchasing a PC now will help students prepare to enter the workforce.

“We’ve debated this issue amongst ourselves, but the reality is almost 95% of companies that graduates are going to go to use Windows software,” Tadepalli said.

Students in the classes of 2021 and 2022 are also “strongly encouraged” to purchase a Windows PC to complete their remaining business courses at Elon.

Elon senior computer science major Liam Lindy was formerly a business major and has taken many of the courses that will be impacted by this switch. He has owned both a Mac and a PC since his freshman year and prefers the Mac.

“I have used both of the systems mentioned in the email and never encountered this issue. I do know that there are some times where the Mac is slightly more difficult but not impossible,”  Lindy said. “In all my business courses, this has never been an issue and I have never heard of this issue among friends or peers. It, frankly, seems out of left field to me. I do know that some programs don’t run on a Mac very well. However, that doesn’t seem to necessitate the mandate of a specific type of computer.”

The business school currently does not have a computer requirement for students. Tadepalli said the school believes that the changes to Mac technology will lead to a move to a common platform among Elon’s peer schools — which include the University of Delaware and Wake Forest University — and the transition will put them “ahead of the curve.”

Schools like Villanova University have already established a PC requirement because of certain software applications that work only in Windows.

“There’s no school that actually requires you to buy a Mac, but there are schools that require you to buy a PC,” Tadepalli said.

“I don’t think it’s overall beneficial because students in other schools, such as the communications school, may not be able to do their work,” Lindy said. “Many students come to school with a Mac already and you are alienating these students. I know other b-schools require the use of Windows; however, that seems unnecessary as well.”

Tadepalli said he understands that students pursuing majors in other schools may want a Mac, and there are plenty of computers available in labs or for borrowing if students need to utilize them.

“Students can use a Mac if they want, but if they have a PC they won’t run into these kinds of problems,” Tadepalli said. “The main thing is to recognize that we just wanted to get students prepared that they’re going to switch. This is not a policy set in stone; we see quick changes in company policies so if we need to revisit it in two years we will.”

The phased transition to Windows computers will take place over the next six to 18 months, and there is no consequence for students who do not purchase a Windows PC.