Zoom fatigue experiment to be done on students

The experiment is on the newly coined term, “Zoom Fatigue” 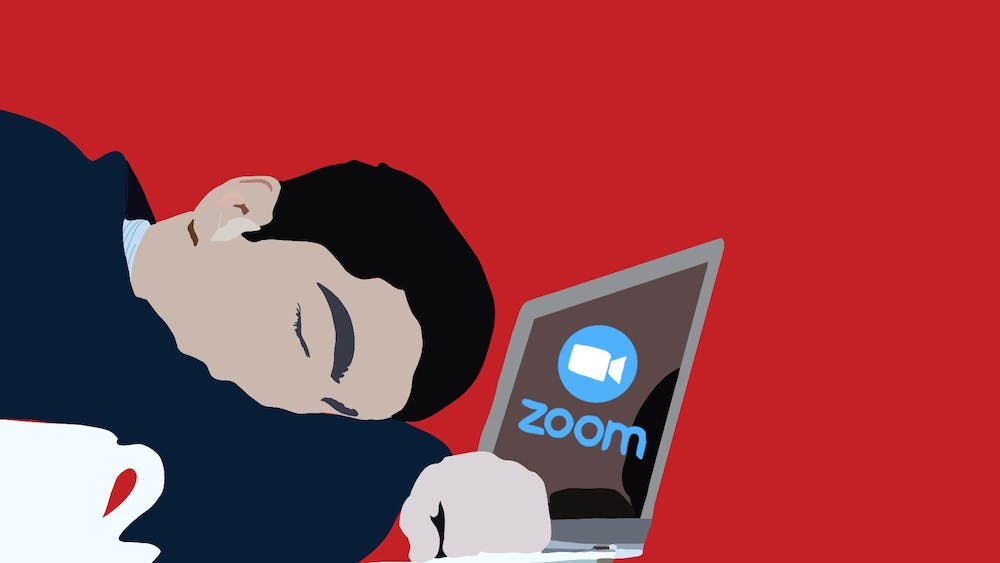 Photo by Caroline Bunder | Elon News Network
The idea of Zoom fatigue is hypothesized by psychologists who say that Zoom calls and video conferences may lead to experiences of anxiety, worrying and fatigue.

Elon University associate professor of exercise science Aaron Piepmeier hosts a senior seminar class every year where his students participate in online research with a connection to exercise science, usually with some psychological influences. This year, two of his students, seniors Emily Klevan and Alexandra Smith, are looking into not a physical activity, but a mental strain: “Zoom fatigue.”

In the class, two students form a group. Piepmeier said that partners find each other after doing small initial literature reviews and identifying who has a similar interest. Klevan, who served as an orientation leader this summer, said she first heard the term “Zoom fatigue” after lots of her training was done online this year due to the COVID-19 pandemic.

"They started using this term 'Zoom fatigue.' And I don't think I'd ever heard of it. But when I heard it, I was like, 'This is so relatable.'"

“A lot of it was watching pre-recorded or live video sessions on a big projector, and we were all getting so tired just from doing it,” Klevan said. “They started using this term ‘Zoom fatigue.’ And I don’t think I’d ever heard of it. But when I heard it, I was like, ‘This is so relatable.’”

Piepmeier said he loved the idea when the two pitched it to them, saying that he saw aspects of Zoom fatigue in his 7-year-old daughter who’s switched to fully remote learning as well.

“When they were starting to figure out how to do her classes, she was on Zoom for hours, and she would just be in a bad mood, which is very unusual for her,” Piepmeier said. “We realized … there’s this correlation between how much you’re on the computer and just how happy you are day-to-day.”

What is “Zoom Fatigue”?

Smith said that because the idea of “Zoom fatigue” is so new, studies haven’t been able to pinpoint exactly what it is or what may cause it. She said that for their initial research, they looked at articles written by the New York Times and the Washington Post where psychologists hypothesized that “prolonged engagement with Zoom calls and video conferencing in general may lead to people experiencing anxiety, worry and fatigue,” as Smith said.

Smith said this definition is what has been driving the study and what they are using to base their experiment off of. She said that this anxiety, worry and fatigue can be increased by the sensory overload that comes with Zoom calls.

“They think that because you’re looking … at a bunch of different faces, sometimes of different sizes, and that you’re making eye contact essentially with potentially all 25 people in your class, which is fatiguing also,” Smith said. “You can see some nonverbal cues. Like you can still kind of use your hands a little bit, but the rest of the nonverbal cues are kind of lost.

Piepmeier said another aspect of anxiety could be how invasive Zoom calls can generally be. He said the idea of everyone being able to “look into your house can be a really uncomfortable feeling.” Also, when on Zoom call, if the camera is on, you can see yourself talking, interacting and looking at what is going on in class, something he said is obviously not normal.

“In no real world face-to-face conversation will I hold up a mirror to myself while I’m talking to you,” Piepmeier said. “So I’m processing all this different information. So I have some emotional anxiety, I have some cognitive load issues because of everything that I’m trying to process right now.”

How the experiment will be done

Smith and Klevan have not done their trial yet, and in order to not give the study away for potential participants, couldn’t say what all aspects of the experiment will be. However, they said the group will then be split in two: a control group and an intervention group.

The intervention group will be able to leave the Zoom call and participate in a ten-minute Zumba class from a YouTube video. The control group will still be allowed to leave the call, but will just watch the Zumba video and not do the exercise.

“We incorporated all of the bad things about Zoom in the Zoom call,” Smith said. “Our first goal is to look at after this Zoom, are these people experiencing fatigue, anxiety, worry? And then our second goal is looking at how can we mitigate those symptoms.”

“At the end, regardless of what happened, you’re going to say, ‘Okay,’ and then just how good are you performing cognitively? How sharp are you right now, regardless of how you feel?” Piepmeier said.

Although there are few studies out right now identifying the causes and effects of Zoom fatigue, Smith said the one thing they think they can rely on to combat it is breaks and exercise.

"What's leading to this Zoom fatigue isn't like 10 minutes on Zoom. It's these long classes. We have an hour, an hour, 30 minute classes.They're hypothesizing that breaks just between two consecutive Zoom calls will help you combat Zoom fatigue."

“What’s leading to this Zoom fatigue isn’t like 10 minutes on Zoom. It’s these long classes. We have an hour, an hour, 30 minute classes,” Smith said. “They’re hypothesizing that breaks just between two consecutive Zoom calls will help you combat Zoom fatigue.”

Piepmeier echoed Smith, saying that although they don’t know if exercise will definitely work, it’s a “really good guess.”

“We know if it doesn’t help, it’s gonna help you in some other way because that’s just kind of what exercise does,” Piepmeier said.

Although Smith and Klevan don’t expect to find out long-term impacts of Zoom fatigue through this experiment, they hope they can provide a foundation for future research into the topic.

Smith and Klevan are hosting their experiment on Saturday and are still looking for participants. If you are interested in this experiment, scan the QR code on this page.