Where do we go from here?

Where we are now, how we got here and what lies ahead for Elon University after Election Day 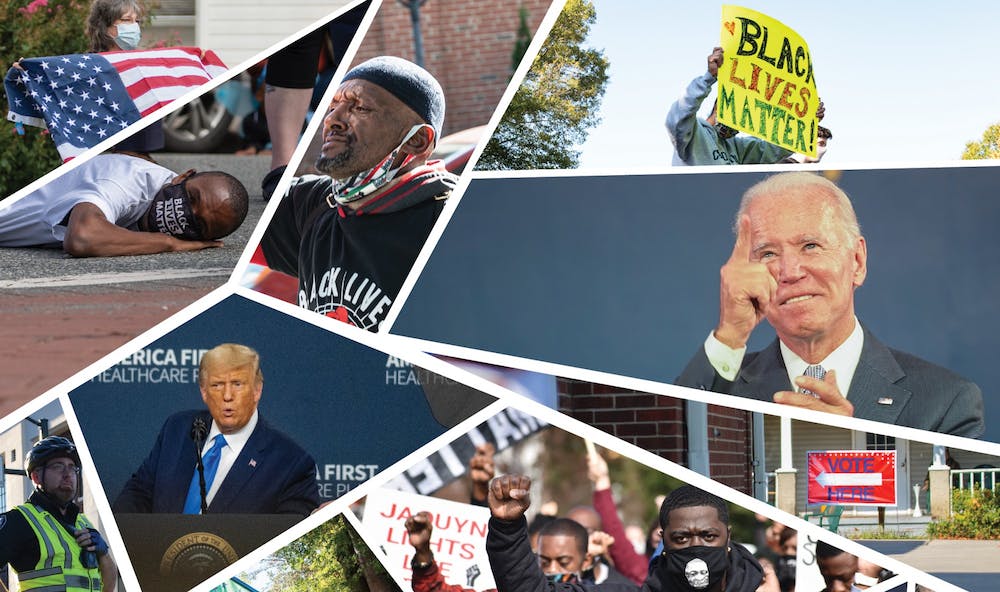 
Images in this collage were taken throughout the course of the 2020 election. Photos by Clare Grant, Luke Johnson, Ben Muse and Grace Terry.

Vice President for Student Life Jon Dooley sighed over the phone as he described the onslaught of stressful challenges this fall has brought between the COVID-19 pandemic, racial tensions and the impending November election.

“This has been a complicated fall. There’s no question about that,” Dooley said, reflecting on what lies ahead after the election. “This has been a very different year.”

America in 2020 has emerged as a divided country. The country’s divergence came to a head with an intense Election Day that saw former Vice President Joe Biden and President Donald Trump face off. The path ahead has the American people wondering how they got here and where they go from here.

“The environment feels different this year than it did in 2016,” Dooley said. “Among students and the country in general, I think there has been so much political polarization.”

Four years ago, Trump won the 2016 presidential election with 306 electoral votes against Hillary Rodham Clinton’s 230, with many polls at the time suggesting a different outcome. What transpired immediately after left political scientists, Democrats and Republicans scratching their head in an America that was fiercely divided.

Rod Clare, an Elon University professor of history who studies a multitude of subjects — including U.S. social studies, African American history and U.S. politics — set the scene for how the division between Democrats and Republicans has grown.

“I‘d say the country as a whole has become more conservative, both the left and right,” Clare wrote in an email. “However, within that framework, the issues that have divided the major parties have become starker.”

Clare said racial issues, free speech, Second Amendment rights, nationalism and protests are flash points to some of the fierce divergence between opposing groups and political parties, and the conclusions drawn from party lines by voters only fan the flames that those topics spark.

And it doesn’t stop at policy making, as political division is also affecting American’s socially.

Data from Pew Research Center shows that over 80% of Democrats and Republicans only have a few or no friends that support the opposing candidate, meaning that voters are less likely to want to be socially involved with the opposite party affiliation.

In terms of racial understanding, another study from Pew shows that 74% of Biden voters say being Black in America is significantly harder than being white, while only 9% of Trump supporters feel the same way.

Looking back to move forward

But divisiveness is not a new phenomenon in American politics. Clare said technology and globalization are key factors in how Americans have historically strayed into disagreement.

“I’d say the divisiveness has been growing since the late 1980s/1990s, but has been accelerated with the advent of social media,” Clare wrote, citing how the role of the U.S. government has been an issue after the Cold War. “We simultaneously saw the U.S. become a hyperpower, yet face diminishing returns at home and new challenges abroad.”

While it’s more clear to equate the modern political tensions of today with the 20th century, Elon University professor of history and chair of the history department Charles Irons goes back even further, comparing today’s divisiveness to that of the Civil War.

“There is an urban and rural distinction, and so-called red states and blue states,” Irons said, referring to today’s political climate. “But the geographic lines were much more stark in the 19th century so that you could have a sectional political party.”

But this historical divisiveness has not been perpetual. Clare is hopeful that Americans can come together after the election, but explained that history shows the recovery from conflict is just as complicated as the escalation to conflict.

“It is a process that takes years,” Clare wrote, comparing divisiveness now to Civil Rights protests in the 1960’s that led to voting rights legislation. “It is determined by new events as much as the situation society was coming out of.”

In the lens of race, Irons described the work both parties have to do together in order to move forward in developing a more inclusive and accepting society that empowers minorities.

“One of the things we have to think about is, will white people be comfortable sharing power across racial and ethnic lines?” Irons said. “That is the only way to slice the pie right.”

Irons is also optimistic about the future, but recognizes that it is a lengthy process.

“There are so many overlapping things and that’s what makes it so hard right now, and there is inertia to old postures and positions and their strange bedfellows,” Irons said. “If I knew the answer to that question and could articulate it in a compelling way, then I would run for office.”

Dooley reflected on the impact that this polarization not only has on the rest of the country, but also the Elon community.

”We’ve heard a lot of questions from students in general saying what campus is going to be like after the election,” Dooley said. “I think it has been harder for individuals to be able to just talk with each other about the future direction of our country, and how our political system and political process fits within that.”

In response to the political tensions this year, Dooley and the Elon Student Life team have planned post-election events for students to attend, including faculty discussions and panels, student reflections hosted by student life centers and a health and wellness panel organized by counseling services.

“What we’ve tried to do is to set up some opportunities that we’ll have for students and the community to come together to make sense of the election,” Dooley said.

With reports saying that election results could be delayed, Dooley discussed the further challenges in planning post-election events, comparing it to similar complications that occurred during the 2000 election’s delayed results.

“It is a little challenging to plan events for after the election, just not knowing what the election results will be and when we’ll know,” he said.

Elon students are being forced to confront their feelings from the stress of current events, according to Mark Eades of Elon counseling services. He spoke about the heightened nerves among students surrounding this election.

“There’s a lot of energy around it, and you can sort of feel that, and sometimes the energy shows up in feeling really nervous or anxious or excited,” said Eades, who will be hosting the wellness panel after the election. “When students come to counseling and they’re feeling that energy around the election, they can show up in different ways. Anxiety is one of them.”

Eades also noted some of the enhanced steps that counseling services are taking to ensure that students are getting the help that they need, including extra training over the summer, increasing availability for students around November and providing services that are conscious of the COVID-19 pandemic.

“We’ve had to make a drastic switch from seeing all students in-person to essentially switching to seeing students all in a tele-mental health format,” Eades said. “[We] make sure that we’re doing it in an efficient and accurate way, and in a way that’s going to best serve the students.”

For the Elon administration, these post-election events are only part of a long process in addressing the problems that the fall semester and the election has brought on. But Dooley remains confident that the Elon community will rise to the occasion.

”I think we’re all looking forward to it being over, but I don’t know that we know what ‘over’ looks like,” Dooley said. “That is going to be the next challenge.”