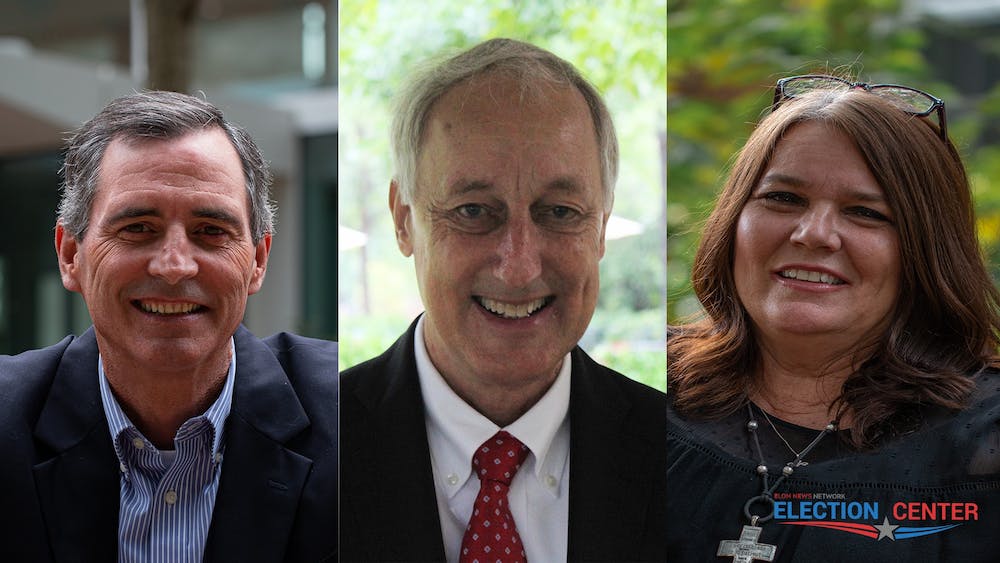 John Paisley won the majority of votes for county commissioner with 18.48%. Paisley said he had so many people encouraging and helping him throughout the campaign.

“It shows that getting out and working, and being well known and hopefully respected and so forth is much more important than money and contributions,” Paisley said.

Paisley, who is also an Elon University alumnus, said he wants to bring the community back together as county commissioner, with safety as “the ultimate goal for everyone.”

“We’ve got to calm things down and get this county back to normal, and instead of arguing and fighting, we ought to be talking and reasoning with each other,” Paisley said. “At the same time, we do not need to defund our law enforcement. We’ve got to be strong.”

After losing in 2016, Paisley was not going to run for county commissioner again, but he said a lot of people “really encouraged” him to run again. Paisley has served on the county board of commissioners previously.

“I plan to do the same thing again, listen to all constituents and take the calls or talk to people,” Paisley said. “And represent the entire county, not some segment of the county.”

Pamela Thompson, who won 18.08% of the vote, said she feels thankful, “but very surprised” that she won tonight’s election.

“I ran against some really good people, and so I’m just very thankful that I got to do this,” Thompson said.

As county commissioner, Thompson said she will be focusing on expanding veteran services and working on crime in the county.

“I’ve really seen how drugs trickle down from home to the school, and it’s heartbreaking because I see what it does to those lives, and they deserve so much more,” Thompson said.

Bill Lashley did not respond to Elon News Networks request for comment.

While he knew Alamance County would be a tough county for a Democrat to win, Bob Byrd said he is “very disappointed” with tonight’s outcome. Byrd won 15.86% of the votes, the largest count of the three Democratic candidates.

“The electorate has spoken and they have elected who they feel would best represent them,” Byrd said.

Democrat Kristen Powers, who ended up just behind Byrd with 15.44% of the vote, said she is very disappointed in the results, but she is not disappointed in her campaign.

“One thing I wanted about this campaign was for it to be something that wasn’t just trying to get elected, but also helped people,” Powers said. “And I will never be disappointed in that.”

For the candidates taking office, Powers said they are walking into their candidacy in the middle of “a turning point” for Alamance County in terms of racial and social justice.

“How do you make a community that’s been neglected for centuries feel heard and recognized and visible?” Powers said. “I would really challenge them to put their all into bringing some racial equity and social equity to Alamance County.”

Dreama Caldwell did not respond to Elon News Network's request for comment.