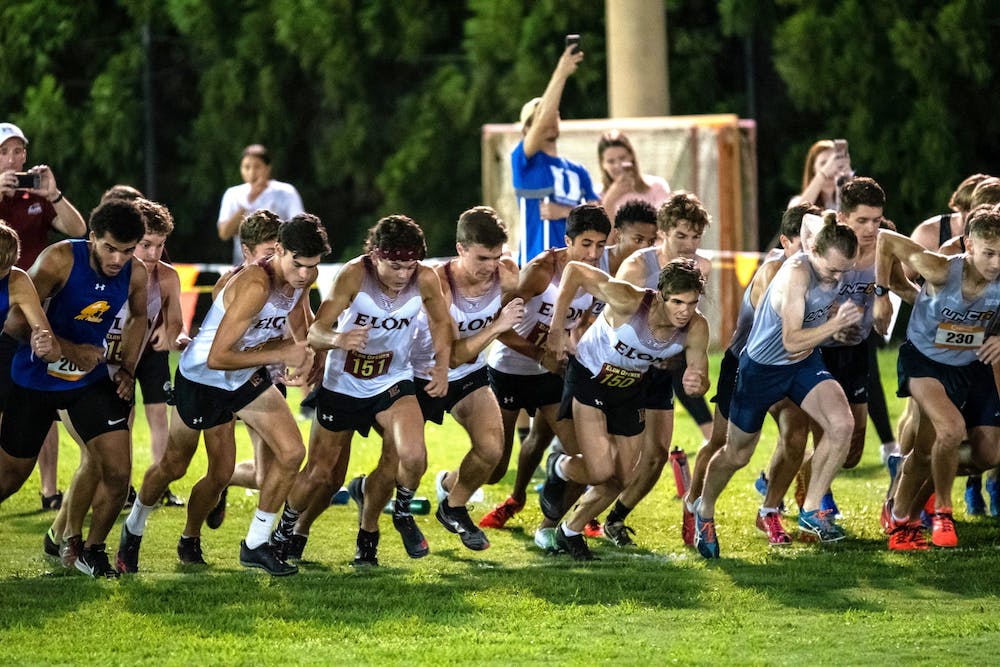 Photo by Thomas Denome | Elon News Network
Elon University’s men cross country begins a meet in their fall 2019 season. They have continued to practice despite not being able to compete in CAA competitions during the fall of 2020.

Normally, around this time of year, the Elon University men’s cross country team would be past the Colonial Athletic Association Championships and would be preparing for the NCAA Southeast Regional Championships. COVID-19 had other plans, however.

The pandemic has delayed the start of the season for many fall athletes, stopping players from practicing with each other. Despite this, the cross country team has been able to get back on its feet without a normal season.

Miller, a member of the team since he first set foot on campus, battled through injuries to earn the title of captain, and even though this is not his final season, he still felt stung by not getting to finish last season because he suffered an injury. He likened the situation to “a slap in the face.”

The team has not had any university-sanctioned practices since the COVID-19 pandemic forced Elon to restrict campus activities, yet cross country, because it consists solely of running, is not as hard to keep in shape for, according to Miller. He said he and his teammates have still been able to train by running long routes.

“Even though we haven’t had the official practice with [coach] Kevin [Jermyn] the entire time, nothing has really changed fundamentally in our training. We’re still progressing the way we normally would throughout a season,” he said. “We’ve had a couple of time trials, we make sure we get our workouts in twice a week, plus a long run every week.”

There is, however, a side to Miller that wanted a break. The other silver lining in this delay of the season aside from still being able to enter races is the opening in his schedule.

“It’s been really nice to just sleep in, make sure I get all my work done, still get all my miles, but not be stressed out about when exactly it happens,” Miller said.

Beyond being captain, he has made the All-CAA team in both seasons he has run for Elon. Despite his success, he is taking a more “wait and see” approach to whether he will make a living out of running. He said he plans to complete his major in exercise science, but if he becomes a good enough runner to garner sponsors, he would go down the path of professional running instead.

“I am not planning on stopping running. At this point, I don’t see a path forward towards a professional career right now. There will have to be some serious breakthroughs,” he said.

One final upside Miller pointed out was the opportunities that are still out there to stay in shape despite there not being a season. Even though Elon is not competing in any official events under their own banner, Miller said he and a few other runners have still been entering races and said he will be taking part in one next week.

The team itself will remain fully intact next season. There are no seniors on the team, leaving the future, albeit seemingly bleak for the short term, bright for the long term. Even with the pandemic faltering their progress, the team is still running toward the light at the end of the tunnel.