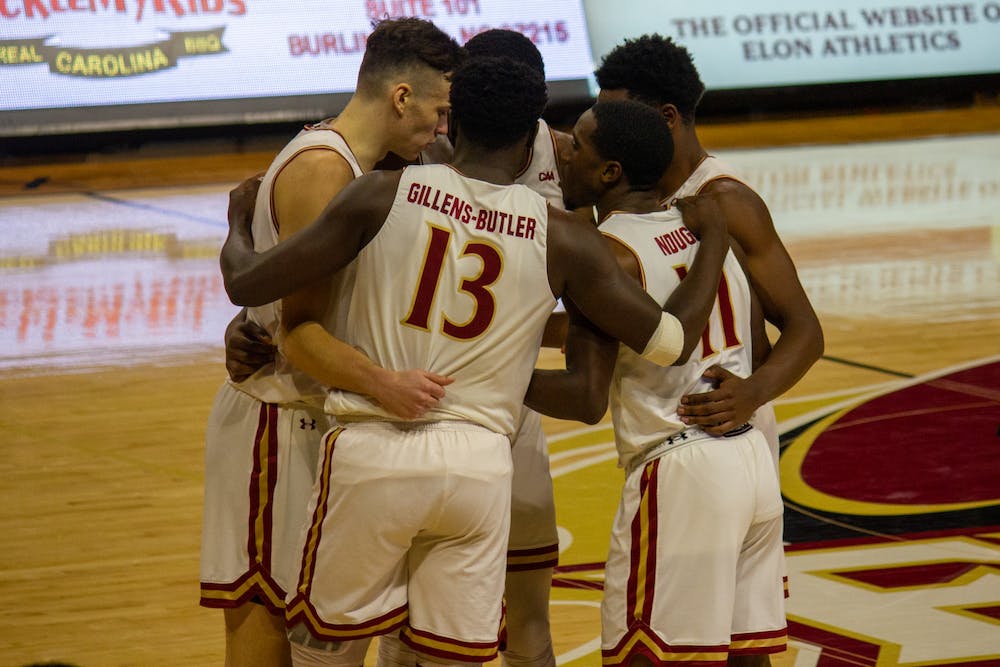 It’s been nine months since Elon men’s basketball has played. Tonight the winding road to the 2020-21 season was capped by a 82-52 victory over North Carolina Wesleyan College. But the season-opening victory was about more than basketball.

In the months after the Phoenix season ended, the deaths of George Floyd and Breonna Taylor led to movements for racial justice across the country and the resurgence of the Black Lives Matter movement. Professional sports teams made various statements regarding racial justice through symbols, jerseys and campaigns. Tonight the Phoenix made a statement of its own. The whole team was outfitted with warm up shirts that had “Equality” written across the chest. On the back, three simple words, “Listen, Learn, Live.”

“I thought we always had dialogue but certainly heightened dialogue when everything happened in May and June,” Head Coach Mike Schrage said. “It's been a constant conversation and it will continue to be a thing with our guys and here at Elon and I’m proud of the response.”

After the national anthem, the players stayed on their feet as “Lift Every Voice and Sing” rang throughout Schar Center. The decision to play the song and wear the shirts was a joint decision between the coaches and players.

“I just want all of our fans and everyone at Elon to appreciate we have a very diverse team now and I want them to appreciate them not just as players but as people,” Schrage said.

Tonight the Schar Center saw action again but the atmosphere was not the same as past seasons. Artificial crowd noise took the place of the Phoenix Phanatics, the seats were barren and halftime entertainment was pre-recorded.

The atmosphere and the team were both different. The Phoenix took the floor with notable absences and additions. Marcus Sheffield, the undisputed leader of last year’s team, had moved on after his final year of eligibility. The team added another graduate transfer, guard Ikenna Ndugba, who left Bryant University after setting the D1 career record for steals (140). Ndugba led the Phoenix with two steals against the Battling Bishops.

The biggest addition for the Phoenix was the return to eligibility of junior forward Jerald Gillens-Butler who sat out last season due to NCAA transfer portal restrictions after transferring from Butler University. Gillens-Butler dropped a team high 19 points in his long-awaited Phoenix premiere. He also led the team with nine total rebounds.

The returning Phoenix picked up right where they left off in March. Sophomore guard Hunter McIntosh scored 18 for the Phoenix and led the team with four assists. Junior forward Federico Poser scored 13 for the Phoenix going 5-6 from the field and 3-4 from the free-throw line.

“Everybody on the team was itching to play,” McIntosh said. “We kinda showed some jitters a bit but everyone was just excited to come out and just compete.”

The Phoenix take on the High Point Panthers Saturday, Nov. 28, in Schar Center.