After four days of keeping the country on edge, election results have been reported in most states, and Joe Biden has made his way to over 270 electoral votes 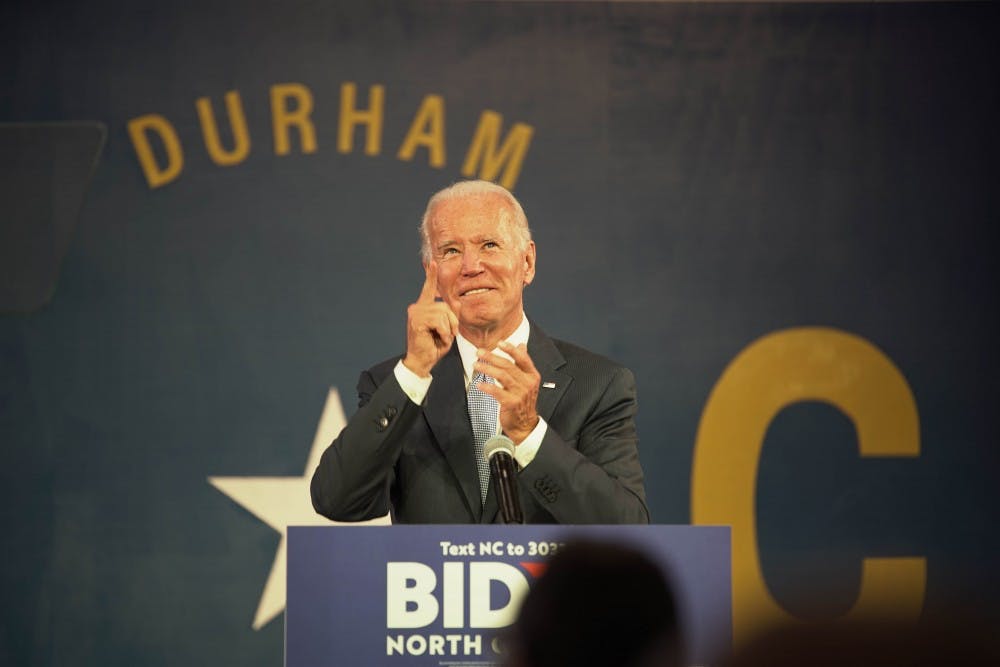 
Joe Biden giving a speech for his campaign at Hillside High School in Durham NC Oct 27, 2019.

Former Vice President Joe Biden — a Democrat — is the projected 46th president of the United States, winning the election after four days of ballot counting in key battleground states. Kamala Harris, a senator from California, was elected the vice president — the first woman, first Black person and the first South Asian American to hold this position.

"I am honored and humbled by the trust the American people have placed in me and in Vice President-elect Harris," a statement released by Biden said. "In the face of unprecedented obstacles, a record number of Americans voted. Proving once again, that democracy beats deep in the heart of America. With the campaign over, it’s time to put the anger and the harsh rhetoric behind us and come together as a nation."

This victory comes from a tumultuous year in which many Americans were uneasy about the outcome of the election and what those results could mean for the future. Polling results conducted by Elon Poll found that 38% of a sample of North Carolina voters were very concerned with violence outbreaks following the election, and 36% were somewhat concerned.

This was a landmark election for some young voters as many of them got to vote for a president for the first time. As of this moment, North Carolina’s presidential results still have not been finalized by any major news outlets, but Trump has a 2% lead with 98% of votes reported.

Elon junior Andrea Sheetz serves as co-coordinator for Elon Votes! and was pleasantly surprised with the record numbers of voter turnout seen during this election cycle. She expected there to be a longer-than-usual wait for results due to a surplus in mail-in ballots during the pandemic, but that wait bred some anxiety for Sheetz.

“I know turnout is fundamental to a functioning democracy, and I also knew we would be seeing a lot more votes this year, which made the process take longer,” Sheetz said. “On Wednesday. I did literally nothing. I had filed through every possible emotion from immense pride for what we've done to fear and shock and like every emotion in between.”

A couple of cars drive through E. Haggard Ave. — the middle of Elon University — with a Biden-Harris flag, honking their horns. @ElonNewsNetwork pic.twitter.com/La16rZpzr3

This record turnout was an advantage for Biden, as he received the most number of votes of any candidate during a presidential election. Despite this, the small margins in many states also shocked Sheetz.

In a projection from The Economist, Biden was expected to have a 97% chance of gaining enough electoral votes to win. The New York Times predicted that for a Biden presidency, he would have to win states such as Wisconsin, Michigan and Pennsylvania. While he did win these states, Wisconsin and Pennsylvania came down to a 1% margin difference between candidates.

“I think a lot of us expected it to be a wider margin of victory for either candidate, and that's something that I've kind of struggled with personally,” Sheetz said. “I was like, ‘why was this election so close?’ But then again I also think it's hard to say what other people are voting on if you don’t necessarily have that same background.”

The other co-coordinator of Elon Votes, sophomore Trevor Molin, expected uncertainty surrounding the outcome of this election, especially following polling results from the 2016 presidential election. In most polls during 2016, Hillary Clinton was expected to have a large margin of victory but ended up being defeated by President Donald Trump. Many polls this year leaned a similar way for Biden.

Molin expects a Biden presidency to lead to a different perspective in the executive office than what he’s experienced in his adult life so far, as Trump has been the president since he became interested in politics. Molin said he is also optimistic of the results that came from many state races as well, specifically those for the U.S. House of Representatives.

“I want to see America’s government look more like what America looks like in terms of who's in the House and the Senate,” Molin said. “Looking at a lot of the outcomes from the House races, there's been a lot of firsts, and that's something that I'm happy to see.”

Women have claimed 135 Congressional seats as a result of this election — more than ever before — and many state assemblies elected their first LGBTQ and BIPOC representatives. Ricky Hurtado is the first Latino Democrat to be elected to the North Carolina General Assembly, he will represent District 63 which resides in Alamance County. Another major first happened in Delaware, where Sarah McBride was elected to state Senate. She will serve as the first transgender state senator in U.S. history and is currently the highest-ranking openly transgender government official, according to POLITICO.

With many results tallied this weekend, some races still have not finished. The Associated Press and major networks have not called the North Carolina Senate seat. While having a final outcome in the presidential election has given many voters solace, Sheetz believes people need to be vigilant in the upcoming months with the election results and issues that may arise in the future.

“I hope that people are paying attention all the time, not just every four years. Yes, we got to this point and this may be a finish line, but the work doesn't stop here,” Sheetz said. “We can slow down a little bit, but we still have work to do. There are still people who need to be heard, and we really need to keep paying attention, keep knowing what's going on, keep having an opinion and keep voicing it.”