After the 2020 season, the women’s basketball team is ready to return with a vengeance 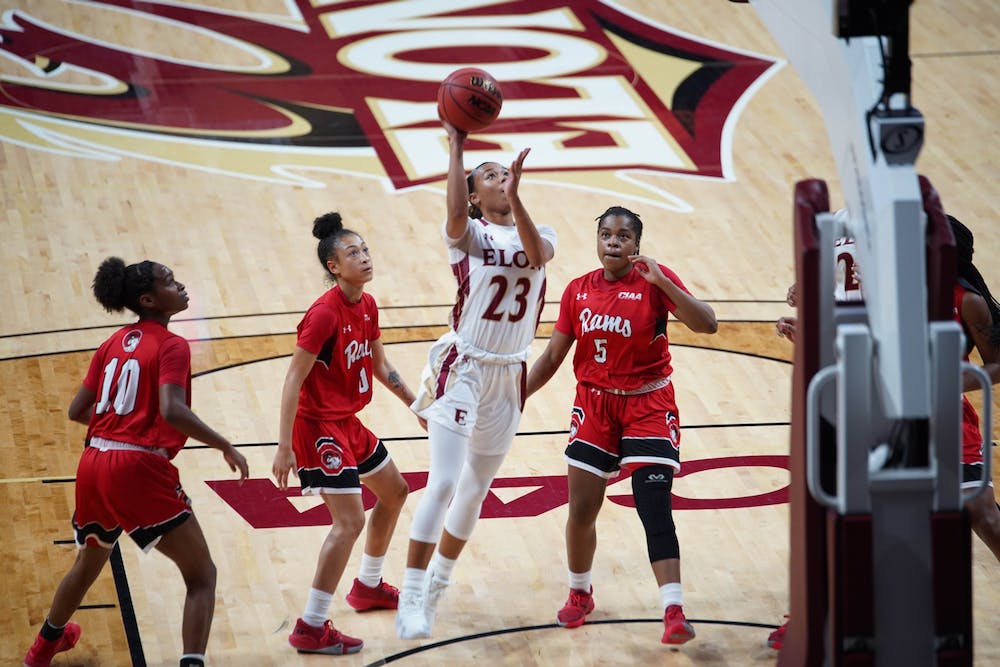 
Then Elon University redshirt sophomore and guard Ariana Nance shoots a lay-up against the Winston-Salem Rams in Schar Center on Nov. 5, 2019

Disappointment surged through the women’s basketball team last year as they were warming up for their quarterfinal game in the Colonial Athletic Association Championship against James Madison University. The announcement was made over the loudspeakers that the tournament was canceled due to the COVID-19 outbreak.

Junior Brie Perpignan felt a range of emotions when she heard the announcement, but the guard said she understood it “was for our safety.”

Senior Saadia Munford said she was also disappointed, saying she thought the team still had a lot to prove and wasn’t able to.

Munford said that the team, which went 14-16 (8-10 CAA) is excited to get back on the court to compete and prove the talent of the team.

Perpignan said the season so far has been full of sanitizing, physical distancing and following the school’s protocols.

“We actually practice with our gaiter masks on. If we’re not actively doing anything on the court, like doing a drill or running a play, you have to put your mask on,” Munford said. “We also get tested very often, like every week. And when school is out, we will get tested like two to three times a week.”

The women’s basketball team practiced in small groups to start the semester. Since the coronavirus case numbers across campus have decreased, they have begun to practice as a full team.

“We are not worried about safety. We know that the athletic department is not going to put us in a bad situation. We feel that if we follow the protocols given, we will be ok,” Perpignan said.

Munford said that as seniors and leaders, they have needed to adapt to the times in order to keep the faith among their team. Perpignan has seen the team dynamic and knows they will be a strong team.

“Our leadership and team dynamic has definitely improved this season and is now very, very good,” Perpignan said.

In previous years, the women’s basketball team roster has shown a lack of upperclassmen with plenty of underclassmen. However, this year, it’s the opposite. With no freshmen on this year’s team and only one transfer, Munford is thankful that their newcomer has seamlessly joined their scheme. Junior Evonna McGill transferred to the Phoenix from the University of North Carolina at Asheville. Due to NCAA transfer rules, McGill is not eligible to play for the 2020-21 season, but has been practicing and getting to know the team.

“She’s a great fit for our team,” Munford said. “Once we started practicing and working out, she fit in seamlessly into what we were doing, so I am really excited to play with her this season.”

Munford also shared how important this season could be for her and her class. During her freshman year, the team won the CAA Championship Tournament and made the NCAA tournament for the second time in program history.

“I have a personal goal of winning every season but I really want to go out with a win this year,” Munford said. “We won our freshmen year so the seniors made it clear when we first started practicing that we wanted to go out the same way we came in, which was champions.”

“When we finally got news about our schedule, we were full of excitement,” Perpignan said. “Just being able to get back out there and play even though the season is shorter than usual. We’re just honored and excited to play again.”

The team will take the court at Gardner-Webb University on Nov. 25 for their first game of the 2020-21 season. Their first CAA matchup will be against Northeastern University on Jan. 2.