Alamance County voters head to the polls on Election Day 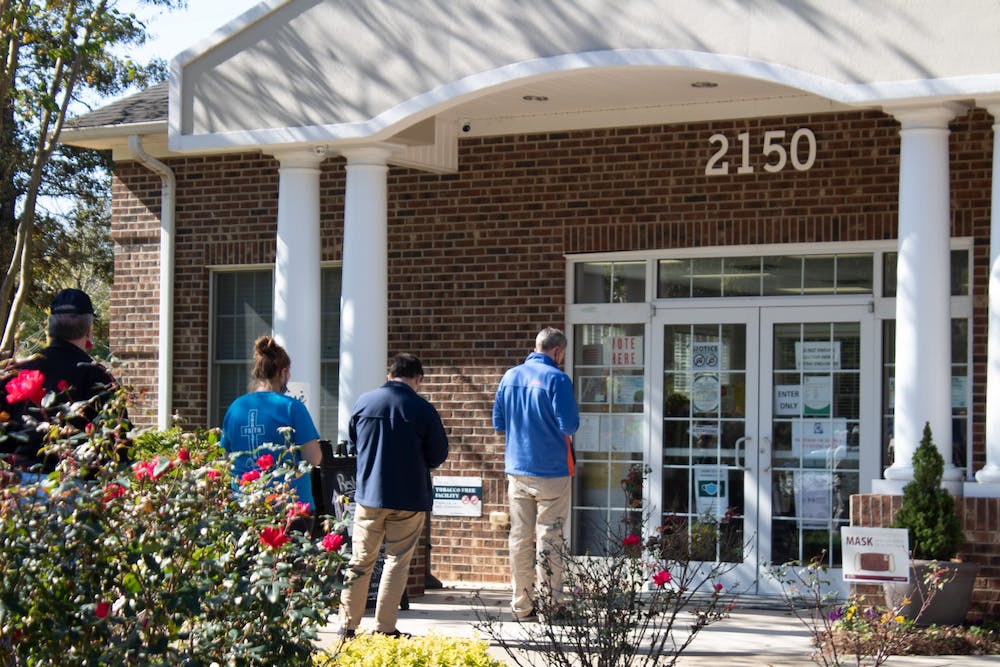 
People line up outside of Beth Schmidt Community Center to cast their ballots on Election Day.

Following months of campaigning, Election Day 2020 is finally here and voters in North Carolina went to the polls to cast their ballots in the general election. Polling places will be open today from 6:30 a.m. to 7:30 p.m. and Elon University is providing BioBus shuttle routes to the polls for in-person voters. Those who have requested an absentee ballot but have not mailed it in yet can still vote in person.

As of Nov. 3, North Carolina had 7.3 million registered voters, according to the North Carolina State Board of Elections website. NCSBE said it anticipates that the results reported by the end of election night will include 97% or more of all ballots cast in North Carolina in the 2020 general election.

Elon News Network was on-site at various polling locations and spoke to voters, who shared their reactions and thoughts surrounding the election and the future of America.

Elon University freshman Tanner Campbell cast his vote on Election Day at Elon Elementary School. Although originally from Massachusetts, Campbell decided to vote in North Carolina with the hope to have more of an impact on the outcome of the elections.

“I'm very excited to be voting today in North Carolina. I'm originally from Massachusetts, but this is a bit more of a swing state, so I think I have more of a say,” Campbell said.

Rather than voting early, Campbell said he wanted to vote on Election Day to have a more meaningful experience.

“This is my first time voting in a presidential election, so I wanted it to feel as real as possible and to get out and vote on an official day,” Campbell said.

The First Baptist Church of Elon

Freshman Alex Fernendez voted today at The First Baptist Church of Elon. Like Campbell, Fernendez hoped that by voting in North Carolina rather than his home state of New Jersey, his vote will play a bigger role in the outcome of the election.

Fernendez said his reasoning for voting on Election Day came as a result of the fact that he was unaware of the option to vote early. However, he is happy he voted today because he said it felt special.

As the day goes on and more ballots are cast throughout the country Fernendez said he is anxious to see the results of the general election.

“I am pretty nervous,” Fernendez said. “It is a pretty big election and no matter which side loses, I am pretty fearful that some riots are going to break out.”

Poll worker and Elon resident Rachel Simpson said that throughout the day there has been a steady line of voters at the center. As people have come and gone throughout the day, everyone has carried themselves with courtesy, according to Simpson.

“People are pleasant and respectful and that's I think the biggest thing — the respect that's happening,” Simpson said.

Two of the people that made up this atmosphere are North Carolina residents Bob and Beth Green. The couple is primarily concerned about the country’s reaction to the outcome of this year's election.

“I don't think people will be happy on either side very well,” Bob Green said.

While the Greens both have their concerns about the results, they are relying on their faith.

Joanne Soliday is another Elon resident. She said casting a ballot on Election Day is an important tradition that should be upheld.

"I feel like so many of our traditions have gone away and so for me, coming out here, standing in the line, and voting on Election Day was one of those things I value."

“I feel like so many of our traditions have gone away and so for me, coming out here, standing in the line, and voting on Election Day was one of those things I value,” Soliday said.

John Stancil was also at the polls today to cast his ballot after registering to vote again in North Carolina. He said that he has not voted in many years.

Stancil was taken back by the lack of voters he saw when he went to cast his vote.

“Well, I'm surprised it wasn’t a bigger turnout. You know, from what I've been seeing on the news and stuff, I expected to be here for hours. Been here about 45 minutes.”

Similar to the Greens, Stancil is placing the outcome of the election in his faith.

“I'm moving forward for the love of the Lord” Stancil said.