Congressman Budd was elected in 2016 after winning 56% of the vote. Huffman has never held public office. 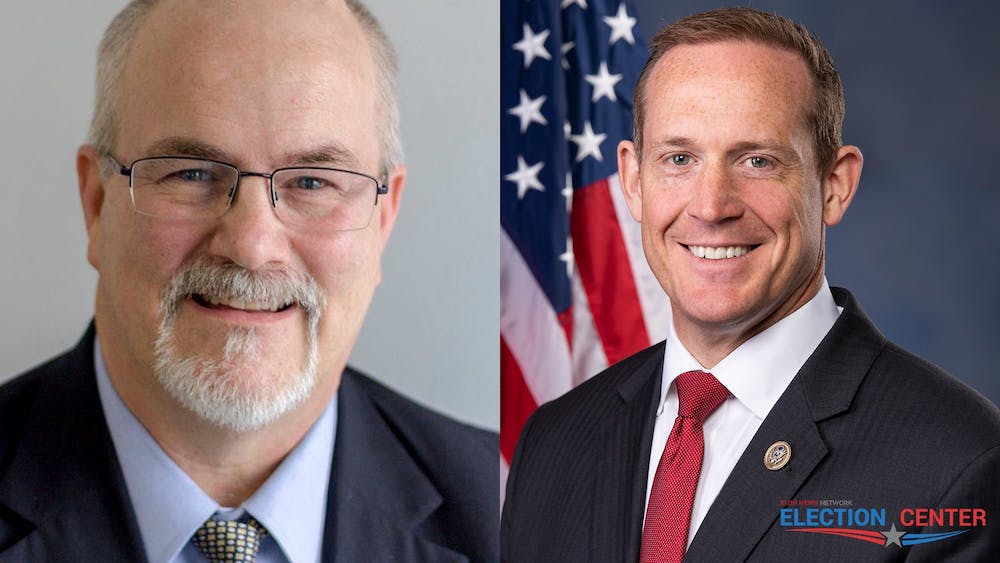 Two-term U.S. Rep. Ted Budd, a Republican, is being challenged by Democrat Scott Huffman, a Navy veteran and small business owner, to represent North Carolina’s 13th District in the U.S. House of Representatives.

Budd was first elected in 2016 — winning 56% of the vote — and won reelection in 2018. Huffman has never held public office, and this is his first time running.

Budd was elected prior to the redistricting of North Carolina’s congressional map. Under the new map being used in the 2020 election, the 13th District gained Alamance, Randolph, Caswell and Person counties, as well as a portion of Chatham County.

However, Budd said he understands the needs of counties that have universities, like Alamance, based on his previous time in office.

“I've been representing Guilford County, which has High Point University  –– competitors, colleagues, allies in lots of different ways,” Budd said, referring to Elon’s relationship with High Point. “And they're both great universities, and have made each other better over the past 10, 15 years. So a lot of the needs that a university community would have, you're also gonna have in Alamance.”

Budd is seeking reelection because he wants to continue serving the people of the district.

“It’s about making others' lives better, easier,” he said. “And helping people with their interface with the government and bringing up good policy. There’s still a lot more work to be done.”

Huffman said he was inspired to run for office following the 2016 election. He said his 11-year-old daughter was concerned about her friends of color, different ethnicities and different religions.

“I think the opportunity to serve in Washington is important and being a public servant is what we desperately need,” Huffman said. “And I'm going to draw from my military experience, my entrepreneurial spirit and take those skills to Washington to try to help our district. When elected, I'm going to represent everybody who is in the district, regardless of their party affiliation. Now we may not agree on a lot of things, but we'll agree on what will help our district. So I'm just as prepared if not more than Ted Budd.”

There have been more than 229,000 cases of the coronavirus in North Carolina and 3,765 people have died as of Oct. 10, according to the state health department.

Huffman said he believes the federal government should have taken more steps earlier to stop the spread of the virus.

“It really goes back to Washington D.C.,” he said. “They didn't do enough to protect us, and if we'd have really taken this virus seriously back in February and March, we would actually probably be reopened on a larger scale than where we are right now. But Governor Cooper was led to lead on his own for our state. They’re dead because the president refused the national mask plan. And my opponent, Ted Budd, did the same thing.”

Budd said he wants to get aggressive on COVID-19 to slow the spread.

“We want to support from a governmental perspective. We want to make sure that we're supporting vaccines and therapeutics and good health measures, which we have done,” he said.

Budd claimed he was the first member of Congress to call for a travel ban on China after the outbreak of the coronavirus in Wuhan in January. He said he believes the U.S. needs to start producing its own personal protective equipment instead of receiving it from China. In September, Budd introduced the Make PPE in America Act.

“This area, Alamance County, you think of Burlington mills,” Budd said. “You think of all the textiles that's produced right here in Alamance County. They've done yeoman’s work in this area converting from fabric production over to PPE fabric production. And we want to make sure that we have our security supply chain here in the U.S. for better security and it's good for jobs as well.”

Budd has signed off on various COVID-19 relief bills, including an $8.3 billion stimulus package (H.R. 6074), the $2.2 trillion CARES Act and the Paycheck Protection Program, which gives loans to small businesses.

President Donald Trump tweeted on Oct. 6 that talks of more stimulus payments would be halted until after the November election. Hours later, however, the president reversed course and said stimulus negotiations are back on.

Regardless, Budd said House Speaker Nancy Pelosi and other Democrats in the House are purposefully slowing the passing of more stimulus packages, like a $138 billion payment from the Paycheck Protection Program awaiting approval.

“It's really become highly politicized, particularly from the left,” he said. “We have put forth about two dozen bills and proposals for my office. We've put forth all of these proposals, but every single one of them have been locked down.”

While Budd has voted in favor of those stimulus packages, he voted against the Families First Coronavirus Response Act –– which passed into law –– that gives paid sick leave, expanded food assistance and unemployment benefits to families. Budd also voted against the Emergency Housing Protections and Relief Act of 2020, which would halt evictions and foreclosures during the pandemic.

Huffman said he supports stimulus payments from the government. If elected, he said he will vote to expand unemployment benefits and the Supplemental Nutrition Assistance Program (SNAP), which provides food stamps to families, to help those feeling the burden of the pandemic.

“Our tax dollars have been going into the federal government for rainy days, just like this,” Huffman said. “And what we've seen is that they're not handing out umbrellas. People need umbrellas to deal with this pandemic. And it's really unconscionable that so many people are hurting. Our [unemployment] numbers are so high we're we're in the worst economic free fall we have ever experienced.”

In April, a month after the coronavirus began spreading in the U.S. more than 23 million people were unemployed, according to the Bureau of Labor Statistics. Last month, the bureau reported that number had fallen to 12.6 million.

In response to the coronavirus pandemic, Huffman’s campaign began the Instant Impact Program, which uses campaign resources to raise money for people facing economic hardship from COVID-19, according to the campaign.

“Before the pandemic, one in five children were going hungry every day,” Huffman said. “And that's probably been exacerbated because of this pandemic and the lack of the fact that kids who would normally go to school, will get their breakfast and lunch at school.”

If elected, Huffman said the program would continue.

“I've talked to college students and high school students preparing for college, and the cost is just out of hand,” Huffman said. “My opponent does not support fighting to reduce the cost of higher education. We need to do that. And I will work with those in Washington and those at the state level to try to focus on a way to reduce the cost of higher education.”

Budd points to his backing of the economic policies passed under the Trump administration as to how he will support college students if reelected.

“I think what I'm supporting actually works and has been proven throughout history and it's led to the greatest economy in 50 years, the lowest unemployment, the most equality in 50 years when it comes to wage growth,” Budd said. “And despite, it's not about what a particular president might stylistically be like. Like it or not, this is about policies that actually work and we've delivered so far and we're going to do it again.”

In June 2019, Budd cosponsored the Student Loan Disclosure Modernization Act, which would require loan disclosure forms for federal student loans to be written in plain language to help borrowers understand what they’re paying for.

Huffman said monuments in the district need to be removed because they were built long ago “to remind people of their place.”

“It’s just creating more and more tensions,” he said. “We’ve got to work on this divide. We’ve got to be more of a united nation, the United States of America. And honestly, the statue should have come down a long time ago.”

On the other hand, Budd believes in relocating monuments, using the removal of a monument in downtown Salisbury to a cemetery as an example.

“You want to keep this peaceful and you want to keep it local,” he said. “We don’t want mobs. Absolutely. We cannot allow mob control. It’s a bad message of chaos and anarchy that I won’t stand for. But, at the same time, if somebody wants to remove or move, relocate, a monument and they come to a civil process for that, then that’s fine.”

Across the state, the accidental drug overdose death rate is 16.7 per 100,000 residents, according to the North Carolina Division of Public Health.

“There are people that are depressed, they are suicidal,” he said. “They're more likely to binge drink. They're dealing with issues of alcoholism and addiction, including opioids, and when the prescription runs out and there is an addiction and it's not dealt with, it turns to street heroin and other drugs. And it's a real problem. We need to get back on track and start where we were in the 115th Congress and under leadership that deals with rural and urban poor that are struggling with addiction and get a handle on this.”

Huffman said to break the cycle of addiction, he will decriminalize drugs and increase mental health treatment if elected.

“It is a disease and my feeling is this: we need to make sure we put funding into these programs that will help these people break the cycle of addiction,” he said. “Right now our prisons are being overwhelmed with people who are drug addicted and have a drug addiction, and they’re in prison where they don’t have the funding and they certainly don’t have the care they need to break the cycle addiction.”

To see Budd’s voting record and stances on issues like gun control, the environment and immigration, click here.

Early voting in Alamance County starts on Oct. 15 until Oct. 31. You can also vote by mail or in person on Election Day, Nov. 3.