Voters face long lines at the polls for early voting

Early voting began today in North Carolina, hundreds of voters waited in line at Holly Hill to cast their ballots 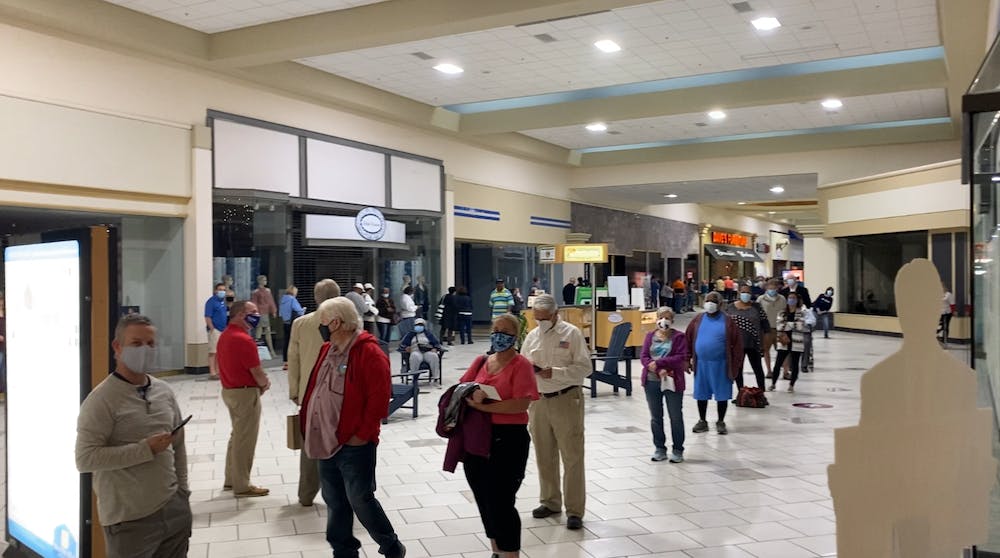 Today is the first day of early voting in North Carolina. Hundreds of voters have been lining up at Holly Hill Mall,the closest early voting location to Elon University of the five different locations in Alamance County.

Voters began lining up around the building before 8 a.m. to get to the polling place within the mall.

Elon freshman Katie Laurence said it was important for her to vote early.

“I think it’s so important to vote and I don’t like that people like to push it off until last minute so it’s really important that I get out here early,” Katie Laurence said. “I also like the anticipation of it too.”

Voters told Elon News Network that once they entered the polling place, they cast their ballots electronically, and picked their candidates using a Q-tip. Once voters had reviewed their ballots, the machine printed them and they were turned in.

Many Elon students waited in line this morning for the first day of early voting to avoid longer lines in the coming weeks and potential political canvassing.

“The longer you wait, number one, the lines get longer, but then number two, you don’t want to get to Election Day and be voting at Election Day,” Elon sophomore Lily Kays said. “That is like, the worst.”

Long line here at Holly Hill Mall for the first day of early voting in North Carolina. Tune into #ELNMorning to hear from some Elon students in this line and how they're feeling about casting their ballot. @ElonNewsNetwork pic.twitter.com/j8sUWtqaTC

The North Carolina State Board of Elections is not requiring voters to wear a mask, but Laurence and Kays say they were “impressed.”

Those who are not yet registered to vote in North Carolina can visit an early voting precinct for same day registration and cast their ballots. Early voting runs until Oct. 31.