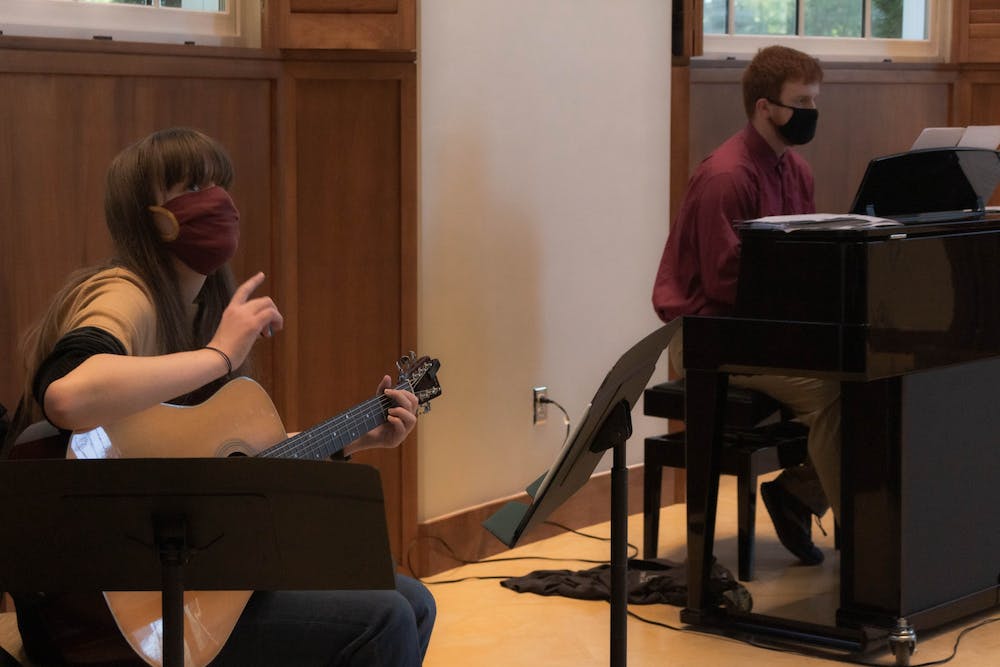 After classes moved online for last spring due to the coronavirus pandemic, Vital Signs, a coed a cappella group, decided to host a virtual concert and dedicate the performance to six senior members who had missed participating in an in-person concert. Junior Alexa Lugo, the president of Vital Signs, and junior Miles Carabello, the music director of Vital Signs, teamed up to write a song to honor the seniors.

“That was a really cool creative experience,” Lugo said. “Our virtual Facebook live concert was the first time that they saw the song we wrote, so that was pretty cool.”

With the onset of the pandemic, Elon choir and a cappella groups are now adapting to new rules and regulations put in place by the Centers for Disease Control and Prevention. In accordance with the new regulations, singers now wear masks, practice virtually or at socially distanced rehearsals and are shifting their focus from large concerts to making new recorded music.

Guidelines from the CDC are calling for wearing masks and increasing distance between people to greater than 6 feet if they are singing, chanting or shouting. The CDC is also recommending modified layouts to gatherings- hosting gatherings in larger spaces, prioritizing outside gatherings when possible and offering online attendance options in addition to in-person.

In addition, Dr. Polly Cornelius, a senior lecturer in music at Elon, is recommending that singers stay hydrated and rest their bodies and voices after vocalizing for an extended period of time to stay safe during the pandemic. Cornelius also suggests singers should learn breathing techniques which put less strain on the voice and to practice warming up before singing in order to help them protect their voices.

Senior Taylor Stephens is working with seniors Sam Davidson and Becca Kimock to assist other members of the Catholic Campus Ministry Choir in following new policies and guidelines. The three seniors are music interns, meaning that they are in charge of coordinating songs to be sung at Mass along with coordinating who are the singers and musicians at Mass.

“In this semester in particular, we’ve done a lot to make sure that we can still have music at our services, but making sure that we follow all CDC and diocese guidelines and to promote safety and make sure that we mitigate the spread of the virus,” Stephens said.

The Catholic Campus Ministry now implements guidelines of their own into services such as there being no singing during Mass, except for a designated cantor and members of the choir who maintain 16 feet of physical distancing to avoid the spread of respiratory droplets.

In accordance with CDC guidelines and diocese guidelines, Stephens, Davidson and Kimock have worked together to develop a strict quota and tap on how many people can sing at a particular service. To help limit the number of people at a service, a choir schedule has been developed each month where every singer has the opportunity to sign up for three slots per month. At Mass and services, there are only three singers including the canter and only two musicians- each individual is practicing social distancing with each other and other congregation members.

Stephens and other music interns have also formulated a cantor schedule where members who are interested in being the leader who sings part of the readings for a specific week are able to do so in a safe way. The cantor schedule has also assigned back-ups for the position if a designated cantor is unable to attend a specific service.

"To see a group of individuals despite everything that the pandemic continues throws at them, one of the most rewarding things to see them want to continue trying to make music as safely as possible and as best we can.Given the circumstances I think that's been just the most rewarding part of all of it."

Contact tracing is being implemented within the choir to allow members to track if they have come in contact with anyone who might be considered sick or ill. Attendance at rehearsals and services is regularly being checked. The music interns have also worked to ensure that members are not present at Mass if they do not feel well or are concerned that they might have come into contact with someone who has coronavirus.

Another measure being taken is the formation of a virtual choir within the Catholic Campus Ministry Choir. The virtual choir allows members to still participate in singing by recording themselves following along to a music practice track which is later compiled and used in services and other functions.

Being part of a leadership team during the pandemic has allowed Stephens to continue encouraging current and new members to keep going and persevering despite the challenges of the pandemic.

“To see a group of individuals despite everything that the pandemic continues throws at them, one of the most rewarding things to see them want to continue trying to make music as safely as possible and as best we can,” Stephens said. “Given the circumstances I think that’s been just the most rewarding part of all of it.”

Lugo, president of Vital Signs, is leading efforts to adjust to the new guidelines by modifying the coed a cappella group’s rehearsals and group meetings. Instead of a classroom, Vital Signs now practices in the Jordan Gym with group members wearing face shields and staying 16 feet apart.

“We’ve cut our in-personal rehearsals down a lot to limit exposure, and we also rehearse in bigger spaces,” Lugo said.

Rehearsals also now consist of leaving time for respiratory droplets to settle after singing for extended periods. Rehearsals are split into allotted increments of time spent between singing and waiting for droplets to settle. Lugo said that group members will typically go outside while waiting and will discuss business surrounding the a cappella group.

Rip Chord, an all male a cappella group, now has rehearsals where members meet in groups of 2 to 4 people separated by voice parts — basses, baritone, tenor and high tenor. Group members typically spend an hour in an outdoor space practicing and recording parts of songs to send to their music director.

The focus of rehearsals have also shifted from practicing an entire set of songs to learning songs for recorded music. Both Vital Signs and Rip Chord are working in collaboration with other Elon a cappella groups to produce music for the luminaries album, a collaborative music album between different Elon singing groups which is set to release in later semester. The luminaries album will allow the Elon community to still enjoy music of the Christmas season despite not being able to have the luminaries light ceremony as in years past.

While performances and concerts remain virtual, singing groups have shifted focus to continue learning music for professional music videos. The songs for each music video are arranged and mixed by group members themselves.

“We’re well on our way to producing two of these music videos and we’re recording them ourselves and mixing them together, so that’s been really fun,” Lugo said. “Some of our newbies actually arranged one of the new songs that we are doing this semester, so that was really exciting.”

Members of Rip Chord are going to a studio in Durham in small groups to record music for an album. Junior Ben Harriton, the PR and social media chair for Rip Chord, said that the studio has been following guidelines, and that group members feel safe and secure.

Recording in small groups in both outside spaces and a studio has allowed Rip Chord to create songs for an EP, a shorter version of an album. The EP is set to release later this year or early next year.

“It’s a pretty big accomplishment considering that we’re not really getting together as a full group,” Harriton said. “Honestly, half of us have never heard the other people sing the songs that we’ve recorded, so it’s pretty cool that we are able to do that separately but have it all come together.”

"It's a pretty big accomplishment considering that we're not really getting together as a full group.Honestly, half of us have never heard the other people sing the songs that we've recorded, so it's pretty cool that we are able to do that separately but have it all come together."

The onset of the pandemic has also impacted how groups are recruiting new members. New member recruitment for a cappella groups occurred early into the fall semester; students stood behind plastic shields and sang for all the groups at one time instead of auditioning for each group separately like they would have previously.

For Rip Chord, recruitment in the past normally occurred at the student org fair where current members asked people to sing for them. However, the pandemic has caused the a cappella group to struggle to find new members due to lower turnout at auditions, which made it difficult for the group to reach individuals to recruit.

“This year we also didn’t reach a lot of people that might not know about a cappella or might not think they want to join a group like that because of the virtual org fair,” Harriton said. “We’re really hoping that in the spring things will be a little bit back to normal, we’ll be able to get some guys that way.”

Despite the challenges of the coronavirus pandemic, both Vital Signs and Rip Chord welcomed new members to their groups this fall.

“It’s definitely been challenging with the friendship aspect, but I really love our newbies,” Lugo said. “It’s starting to feel like they are a part of the family now.”