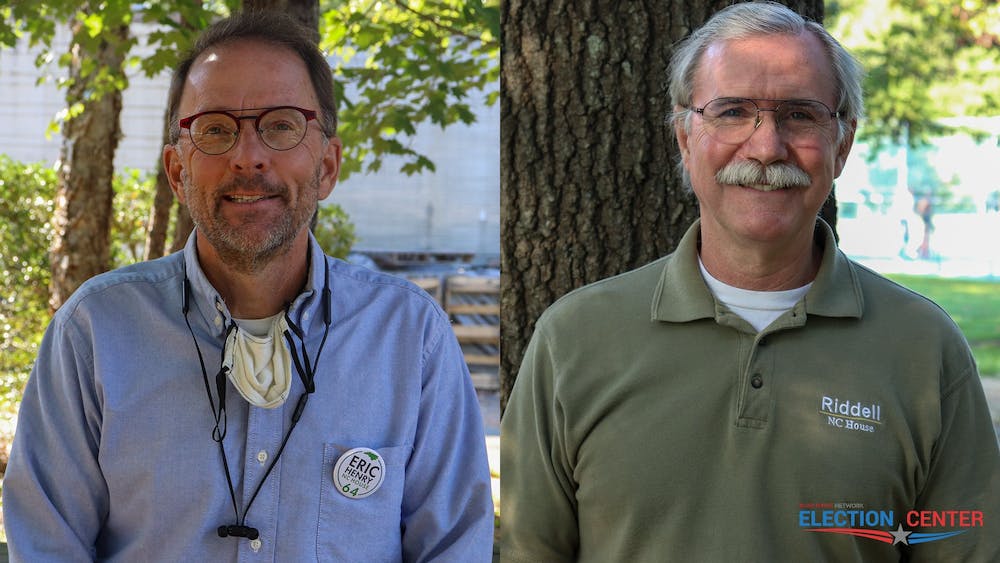 With the election less than a month away, the two candidates spoke to Elon News Network and outlined their respective policies.

Henry is currently the president and CEO of TS Designs, a screen printing company in Burlington. Henry said both him and his company’s attention on the environment is one of his main inspirations for running for office.

“Nature's a system that we're a part of. So [the] main reason I'm running is I want to reconnect and rebuild communities that have been devastated both by the environment and by political forces that have ideologies that benefit certain groups of people,” Henry said. “And I like to say a community cannot be successful unless everyone in that community has the opportunity to participate.”

Henry said Republicans have failed to acknowledge the existence of climate change, and outlined what must be done on this issue.

“We have to come together and start laying out steps of how you, me, business and community can start addressing that. And every day that goes by ... it's gonna be worse,” Henry said.

Henry is taking on an incumbent and hopes his own run for office will provide voters with a choice.

“I'm not saying one person nor one party has all the answers,” Henry said. “We have got to start coming together solving problems because the problems are getting worse, not better. And so my main reason running is this is my community. In my 60 years of being here, I think I have some things I've seen, learned and can give back to my community, that I want to be a part of that conversation.”

Henry also said that he wants college students to be able to participate in these conversations, and he wants the community to be a place that students want to stay in after graduation.

“Another thing I want to do in Alamance County is create opportunities for young people that graduate that want to stay here, because you have this tremendous asset,” Henry said. “There was nothing more frustrating is seeing these students that I work with as interns, and then they graduate and says ‘There's nothing here for me to do.’”

If elected, Henry said he wants to work to pass Medicaid expansion as part of the coronavirus pandemic response. He is critical of President Donald Trump’s response, and praised North Carolina Gov. Roy Cooper.

“Hats off to Roy Cooper. He's been right out in front. He's made some hard decisions. It's impacted our business,” Henry said. “I'm also involved with Burlington Beerworks, which was really impacted for being shut down for weeks, if not months. But he made those tough decisions.”

Henry and Riddell are facing off on the November ballot, but the two know each other well.

“I've known Dennis for many years. He's actually a neighbor of mine, lives about a mile away. I've been to Raleigh many times, met with Dennis,” Henry said. “Let's just say Dennis and I have a different perspective of things and topics. One of the main reason I decided to run is I want to give our community a choice.”

As Dennis Riddell seeks his fifth term as a representative, he said his first four terms have allowed him to establish himself in the Alamance County community.

Riddell also said that it is time for North Carolina to reopen.

“I would hope we can do going forward, is reopen North Carolina, it's not the first month of COVID anymore,” Riddell said. “Now we’ve got a history with COVID. And we know that it tends to impact an older, more vulnerable community than it does college-age people, even children. So that should change our approach, we should be able to do more, because people need to be at work.”

Riddell is also critical of the way Gov. Cooper has handled the coronavirus pandemic.

“There's no one person to have sufficient knowledge or understanding to regulate 10 million people, livelihoods, jobs, hobbies, church associations, community groups and things like that,” Riddell said. “I think Governor Cooper missed a big opportunity to push a lot of the health care, especially provisions down to the local health departments to work with them to be the provider, kind of like the federal government was doing for the states.

When it comes to young voters, Riddell said that this election is about the future. More specifically, Riddell elaborated on the amount of debt that his generation has incurred at the federal level.

“That is morally reprehensible. You cannot saddle another generation with your debts because you did not have the boldness to either pay as you go,” Riddell said, “Or to reduce the costs of getting. It's [the college-age]  generation that's going to deal with that. You'll deal with it in [...] lower wages rather, because of higher taxes.”

Much like Henry, Riddell said this election comes down to a simple choice.

“Eric's liberal, in his perspective on most issues. He doesn't shy away from it. I don't blame him in that at all. I'm conservative. I think that the things we've done in Raleigh over the last eight years that I've been there are conservative basic principles. And we've proven that they work,” Riddell said. “That's the bottom line. It's a choice simply between conservative or liberal. Two nice guys from different political persuasions.”