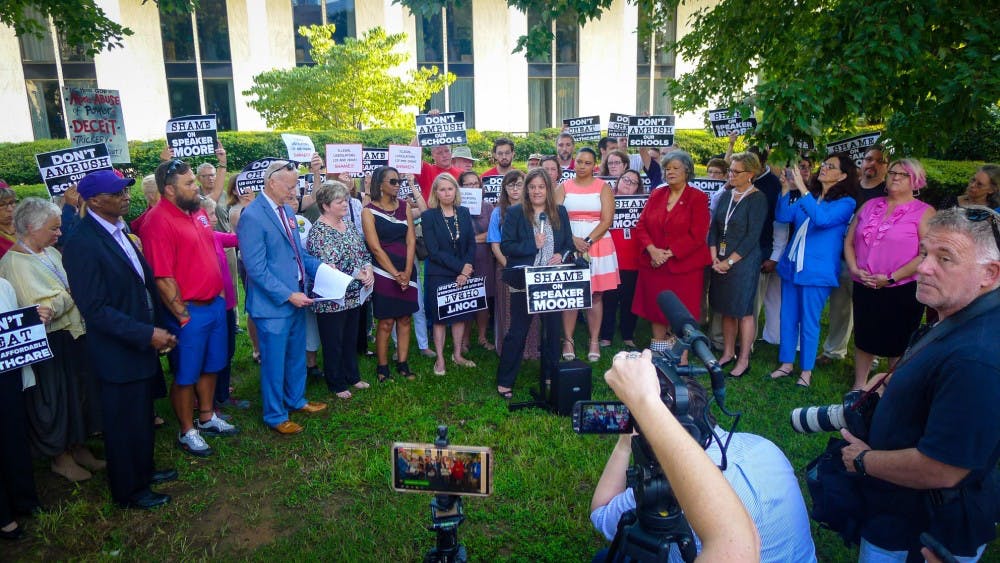 On Thursday, Sept. 12, Progress NC, the North Carlonia Association of Educators, Down Home North Carolina and the NAACP and other groups gathered for a rally in opposition to the veto override. Photo contributed by John Autry

GRAHAM — There’s a small house with painted hummingbirds on the side in southern Alamance County. It’s a food pantry that’s been around for six years. Lynne Pierce works there. She’s worked different jobs in the nonprofit sector for 20 years, serving the county through drug treatment programs and food pantries.

“I have a master’s degree in education,” Pierce said. “I could be somewhere else, but I enjoy what I do.”

However, Pierce can’t afford health care, and her job doesn’t provide it for her. She’s in the Medicaid coverage gap. The North Carolina Department of Human Health Services and the Centers for Medicare & Medicaid Services (CMS) do not keep data on who is in the coverage gap.

A coverage gap is when a person’s income is too high to qualify for Medicaid, but too low to afford private insurance. As of July 2019, North Carolina is one of 15 states that has not expanded Medicaid, according to the Medicaid and CHIP Payment Access Commission.

Currently, to potentially qualify for Medicaid or Health Choice in North Carolina, a person must be 65 years or older, blind or disabled, younger than 21, meet the low-income threshold based on family size or be in need of long-term care.

Pierce said she did not expect to be in the Medicaid coverage gap, but as a single parent working in the nonprofit sector, she fell into it.

"There is no way, as a single parent, I can afford insurance."

“There is no way, as a single parent, I can afford insurance,” Pierce said. “Because if I have to pay for insurance, then that means I’m taking food and other necessities out of my child’s mouth. That’s a decision that nobody should have to make.”

Pierce said that there are often misconceptions about who needs Medicaid assistance. She said the stigma that people in rural communities can’t afford health insurance impedes Medicaid expansion.

“Society [is] brought up [thinking] that if you can’t afford your basic needs such as health care, that you’re poor, you’re non-white, you’re uneducated, you’re lazy and you don’t care about your community, and all you want to do is take the hard working money on somebody else’s pocket,” Pierce said. “And that’s not true.”

According to the Patient Protection and Affordable Care Act the federal government would cover 90% of the cost to expand Medicaid and North Carolina would cover the remaining 10%, starting in 2020.

Pierce said she struggles with diabetes and high blood pressure. She said that upon diagnosis, she thought she was going to have to wait until she got paid to be able to afford her medication, and would have to give up her gas money and groceries for the week.

Pierce had the opportunity to meet with Gov. Roy Cooper this summer to show how people who can’t afford health insurance can be everyday, working-class people.

“It was great that Governor Cooper has taken up this battle,” Pierce said. “It’s going to be a hard battle to win, but I appreciate the fact that he’s listening.”

The Republican majority in the state house wants to transform the current Medicaid system. On the same day as the HB 966 vote, the house voted 54-15 to override the governor’s veto of HB 555: Medicaid Transformation Implementation, which would change the current Medicaid system from a fee-for service to a Medicaid managed care system. A managed care system would allow Medicaid providers to partner with health care providers and pay them a fixed amount of money per patient per month.

The Alamance Chapter of Down Home North Carolina, an activist organization, has been advocating for Medicaid expansion. When Down Home heard about the House overriding the governor’s veto, its supporters headed for the capital.

Dozens held signs saying “Shame on Speaker Moore” — a reference to Tim Moore, the speaker of the House who called the surprise vote on the veto override — gathering outside the General Assembly the following morning.

Brigid Flaherty, co-founder and co-director of Down Home, said the organization felt the need to take action against the surprise override.

“At Down Home, we felt like we had to go into a rapid response mode, because this was to us an ambush,” Flaherty said. “It was an ambush in our democracy.”

Though Pierce did not protest at the General Assembly, she was angry about the override veto.

Pierce has a host of worries because she is uninsured. She does not believe a family should have to worry about basic necessities, like she does, every day.

"if i had to go to the emergency room right now, the first thing that would come through my mind is, 'is this going to be my morgage payment?"

“If I had to go to the emergency room right now, the first thing that would come through my mind is, ‘Is this going to be my mortgage payment?’” Pierce said. “I would not go unless it was life threatening. But you shouldn’t have to worry about losing your house, or losing your car or the things that you need to have to live.”

When Down Home began, Flaherty said that affordable health care was a top priority for Alamance County. She said that the chapter was primarily organizing around the issue of health care.

Pierce said she isn’t involved in politics. She describes herself as a moderate, who picks and chooses issues to focus on. She said that health care was something she had to speak up about.

Cooper’s proposed compromise with the Republican majority legislature would be to expand health care coverage for more than 500,000 individuals in North Carolina.

Dennis Riddell, the Republican District 64 representative presiding in Alamance County, voted in favor of the veto override of the state budget—HB 966.

Riddell, in an email, stated that the budget allocations in HB 966 are priorities that need to be addressed.

"I strongly disagree with Gov. Cooper's decision to hold the entire NC budget process hostage to Medicaid expansion," he said. "I do not think it is wise to prioritize expansion of a federal entitlement program over the needs of all North Carolinians."

Riddell said that there are alternative "initiatives" that can be implemented to help the uninsured.

People such as Pierce hope that Medicaid expansion will pass in North Carolina eventually.

“Until the House can find a balance and become bipartisan again, I don’t see any chance that it’s going to change until election time,” Pierce said.