Hurtado and Ross will go head to head on Nov. 3 during the general election, with platforms encompassing local economics, education and racial injustice 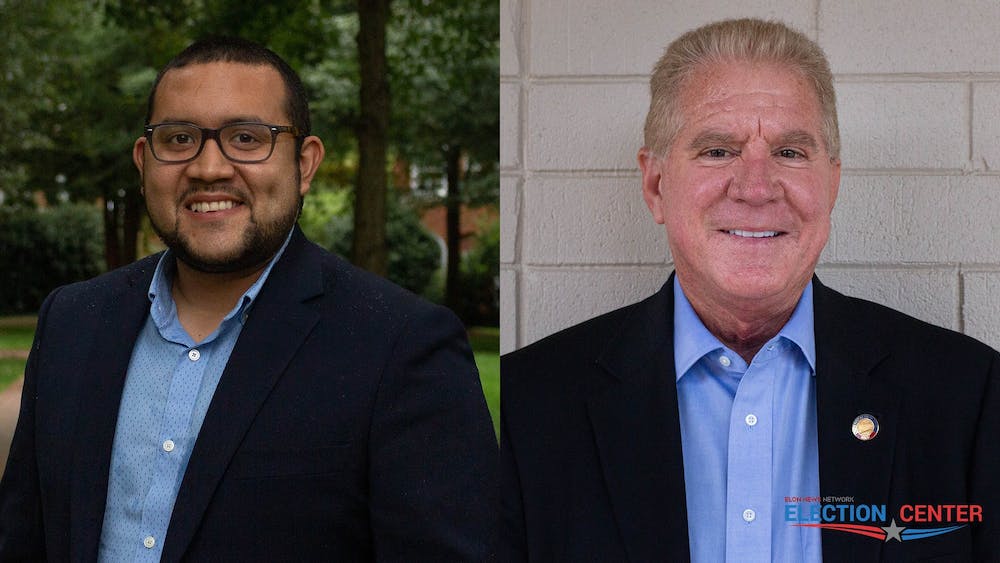 UNC-Chapel Hill instructor and Democrat Ricky Hurtado will face off against Republican incumbent Rep. Stephen Ross on Nov. 3 this election season for District 63 of the North Carolina state house. District 63 begins right next to Elon, including Graham, and stops at the border with Mebane.

Both candidates bring issues such as education, the economy, racial injustice and ideas on how to handle the coronavirus pandemic to the floor.

Hurtado, a North Carolina native, went to the University of North Carolina at Chapel Hill and Princeton University as a first-generation college student, later becoming an educator at UNC. Hurtado said he’s running because he thinks Alamance County needs different leaders who can meet current challenges, such as public health, economic and racial injustice issues.

“Part of my vision for Alamance County and North Carolina is for us to really bring back trust to our public institutions and to government,” Hurtado said. “We've recognized that good government and good leadership matters.”

As a product of public schools and an educator himself, Hurtado believes investing in schools and communities by raising teacher wages and lowering the cost of college tuition is critical.

“We know in North Carolina that there’s going to be half a million jobs that need to be filled over the next ten years,” Hurtado said. “I’m thinking critically about how we support our young people to make sure they fill the jobs of the future here today.”

Hurtado also supports North Carolina Gov. Roy Cooper’s path to reopening the state as the world continues to battle the coronavirus pandemic. He said the governor’s school reopening plan has allowed schools to think about the balance between health and education.

“Governor Cooper made the right call in creating a framework that allowed us to think critically about both balancing the health and safety of our students and our teachers, but also the learning needs — especially of our youngest students,” Hurtado said.

Hurtado contracted COVID-19 back in June and said the issue of the pandemic is a personal one for him.

As a result of the financial strains the pandemic has put on businesses and families in the community, Hurtado said he is also in support of raising the minimum wage.

“Making sure that we’re raising the current minimum wage to a living wage and so that mothers and fathers in our community don’t have to work more than one job to put food on the table I think is really important,” Hurtado said.

Hurtado also spoke on the issues of racial injustice in Alamance County, citing issues with both the Confederate monument in Graham and the Trump convoy that rode through Elon University’s campus. According to Hurtado, he supports the removal of the statue.

“I am in support of removing the monument and placing it somewhere where it will continue to be an opportunity to learn from our past and our history,” Hurtado said. “I think that we certainly have to find ways to continue telling the full story of Alamance County and why that statue was there to begin with, but it certainly shouldn’t be in a place of seat of power in our community.”

On the convoy, Hurtado said although people have a right to express support for their politicians, racism has no place in the community, and he urged current leaders to speak out against those actions.

“I think regardless of your political stance, racism has no home in Alamance County,” Hurtado said. “We should all be working together to make sure that is true.”

Ross, who was born and raised in District 63, is a graduate of Elon University. Ross has held political office before, beginning as a city council member and then becoming mayor of Burlington before transitioning into state government. Ross is running for reelection to continue his work on bringing back manufacturing and vibrancy to the downtown area.

“I look forward to continuing to try to do what we can to rebuild our downtowns because a vibrant downtown helps to create a healthy community,” Ross said. “A dilapidated, run-down downtown area just has an effect on everybody.”

One of Ross’s main goals, should he be reelected to his current position, is in continuing to bring back businesses and manufacturing to Alamance County and the downtown Burlington area. Ross said the local economy was devastated after the textile industry left.

“That was the lifeblood here,” Ross said. “In fact, Burlington was recognized as the textile capital of the world. So we had to reinvent ourselves and I think we did a pretty good job with that.

He said his tax policy legislation — which he renewed twice in Raleigh, once being last year — helped in opening and supporting places like White Furniture in Mebane, the Oneida Mill in Graham and the Cone Mill facility that will be opening on the Haw River.

“None of these would have been possible without this work,” Ross said. “But it’s something that’s not permanent. You have to keep spinning that top, you have to stay in there and keep fighting to preserve not only the old buildings and the downtowns but to have a policy where the developers can actually afford to take on the risk.”

Ross has also voted for House Bill 1105 in September, which helped support businesses hit hard financially by providing funds to Golden LEAF, which gave out loans to small businesses.

“I crafted legislation to provide what we call bridge loans to small businesses in order to keep them from going under during the pandemic,” Ross said. “There are loans that go out with no interest and kept a lot of small businesses afloat.”

Besides business and the economy, Ross said the pandemic has derailed education in North Carolina, which has brought more issues into the limelight.

“One thing we’ve learned ... North Carolina lacks in broadband in a lot of areas,” Ross said. “A lot of kids can’t do their homework because they don’t have an internet connection. That’s an area we’ve got to work on.”

Ross also said overall the reopening process from Gov. Cooper could have been smoother and that the back and forth plans, especially for education and businesses, caused confusion.

District 63 also falls into the Graham jurisdiction, where tensions over racial injustice — especially regarding issues like the Confederate monument — remain high. According to Ross, he believes it is up to local — not state — government to decide what to do regarding the statue.

“To me, it’s up to each community to make that decision, and I think when you try to go in and make a decision for a community that’s when you usually create more problems,”  Ross said.

Regarding the convoy that recently drove through Elon University’s campus, Ross said he was out of town and the time and had not heard about it until he returned afterward. He said if the language used during the convoy was true, there is no place for that in Alamance County.

“I still don’t know exactly what happened, but if things were said that I’ve heard were said, it’s unfortunate,” Ross said. “There’s just no place for it, not in America today, really not even yesterday, but we only have today and looking forward and I think we’ve got to get past that.”