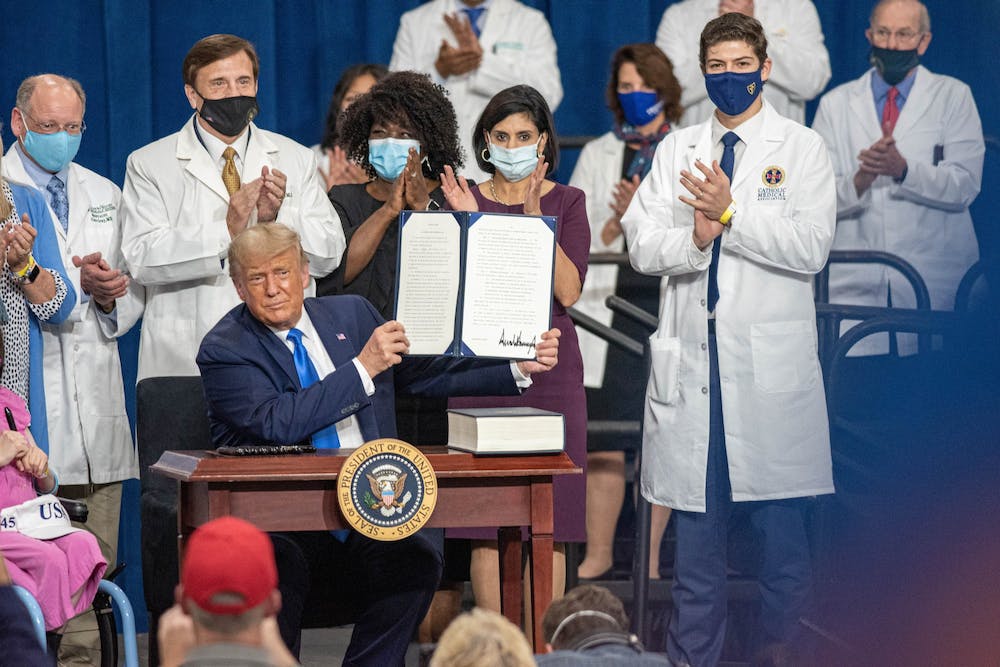 CHARLOTTE — President Donald Trump announced his "America First" healthcare plan at the Charlotte-Douglas International Airport on Sept. 24.  As a part of the plan, he signed an executive order pushing Congress to pass legislation by Jan. 1 that would protect healthcare patients from surprise medical bills and guaranteeing cheaper coverage for people with preexisting conditions.

The venue provided seating to roughly 120 attendees who were pre-screened for the coronavirus, according to Peter Hoffman, director of regional communications for the Trump campaign.

Before Trump began his speech, United States Secretary of Health and Human Services Alex Azar told the press the current administration will "take any executive and regulatory action" to protect patients.

“The president is saying that all the relevant players had better get their act together and get legislation to protect patients from surprise medical bills,” Azar said.

The other executive order declares policy to protect individuals with preexisting conditions, and that all conditions are guaranteed under U.S. policy, Azar said.

The plan is being announced as the Trump administration is working to strike down the Affordable Care Act in the Supreme Court, with the hearing set to occur on Nov. 10, just one week after Election Day.

“The ACA has been anything but affordable,” Flemming said. ”Americans have seen deductibles and premiums skyrocketing, and at the same time having de-personalized care.”

Flemming went on to say that the president wants all Americans to have “better choices, better care and lower costs.”

During his speech, Trump also criticized the ACA, eliciting boos from the audience upon its mention.

"When I was elected, I inherited a thing called Obamacare," Trump said. "It was terrible and very, very expensive. Hurt a lot of people, premiums were too high, deductibles were a disaster, patients had no choice."

In order to fix this, Trump said, the America First healthcare plan would use "three pillars." These included more choice for patients, lower costs for families and seniors and better care for American patients.

When Trump signed the executive orders, he was surrounded by several people, including Julia Stathopoulos — who has Freeman-Sheldon Syndrome — and Sharon Leader — who Trump said was surprised with upwards of $4,000 in medical bills after a short hospital stay.

"We're delivering a healthier, safer, brighter and more prosperous future for every citizen in our magnificent land because we are proudly putting America first," Trump said before signing the order. "It hasn't happened for a long time."

Mary Tipton, a doctor from Salt Lake City, Utah, attended the event and said she has seen a lack of faith in the health care system during her career.

"Patients of mine are tired of paying more and getting less. And that is what's been happening for the last 10 years during the current healthcare system," Tipton said. "What we need is for that to change, and President Trump knows that and I'm proud to be a part of the movement for lower prices, more patient choice, and transparency."

Kimberly Legg-Corba also attended the event. During her time as a doctor in Allentown, Pennsylvania she said she has been disappointed with the direction of healthcare in the U.S.

"I've been in practice for 23 years, and I've slowly seen the patient being removed from being at the center of the delivery of healthcare," Legg-Corba said.

Trump’s visit was just one day after Democratic presidential candidate Joe Biden was also in Charlotte. In an event with pooled press, Biden spoke to African American business owners about systemic racism and the coronavirus’ effect on minority communities.

The Biden campaign provided a statement from the former vice president in response to Trump’s visit to North Carolina, saying that despite Trump promising a healthcare plan, he “has never offered a plan of his own.”

“[Trump] cheered on attempts by Congressional Republicans to rip health care away from more than 20 million Americans, and sides with Republicans in North Carolina who stand in the way of expanding Medicaid coverage to more than 700,000 North Carolinians,” Biden’s response said.

“As President, I will bring people together to protect and build on the Affordable Care Act, lower health care costs for working families and seniors, and ensure that all Americans have access to the quality, affordable coverage they deserve,” Biden said.

Emery Eisner contributed to the reporting of this story.