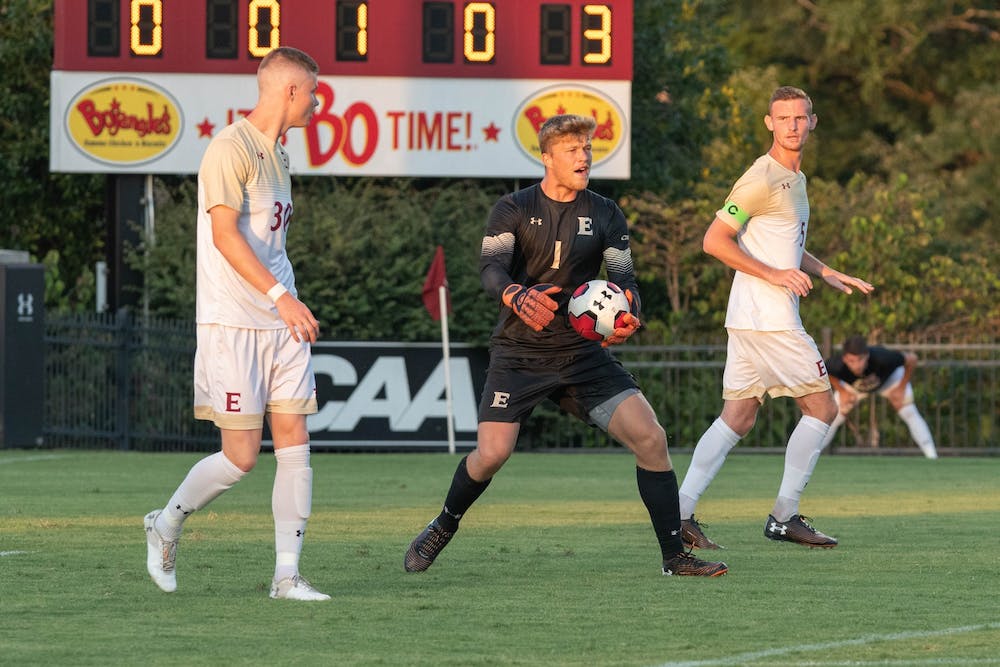 Photo by Thomas Denome | Elon News Network
Elon goalkeeper Peter Wentzel, flanked by defenders Lewis Green (left) and Luke Matthews (right), prepares to make a throw during their game against the Rutgers Scarlet Knights on September 7, 2019 at Rudd Field. The Phoenix lost to the Scarlet Knights 0-1.

On the field, Elon redshirt sophomore and Phoenix men’s soccer goalkeeper Peter Wentzel has to be prepared for anything. But nothing could have prepared him for what happened last spring.

A native of Germany, Wentzel and his friends were enjoying the beaches of Florida in March, soaking in the sun and enjoying the relaxing bliss of the soccer offseason. The coronavirus pandemic was still in its infancy.

“In Florida, it started to get a little bit worse, slowly, but from one confirmed case, somewhere in Tampa, it turned out to be multiple confirmed cases in our area, and we really didn’t know what to do,” Wentzel said.

The whirlwind began. Cases of the virus quickly started popping up across the country. Elon University made the call to suspend in-person classes. The campus was cleared out except for Wentzel’s things. Wentzel had to do what he does best: react quickly.

He called his family and determined the best place for him was home in Ettlingen, Germany. The next thing he knew, he was on a flight from Florida to Germany. All he had was a ticket, a laptop and a single backpack full of vacation clothes.

“My mom gave me a call and said, ‘Listen, I got your flight tomorrow. 5 p.m. I’ll see you at the airport,’” Wentzel said. “And next morning, I thought I’d wake up somewhere in Florida, but turns out that I was back in Germany.”

When he landed, Wentzel was met with a serious challenge. Although Germany was in a near full lockdown, Wentzel still needed to train. He was allowed to leave the house for physical activity, but fields at gyms were all closed.

Over the course of the lockdown, Wentzel didn’t put on his goalie gloves for close to eight weeks. Meanwhile, his teammates in the United States were able to practice together on open fields. But the international trends of the virus would change. By mid-June, Germany was back to a sense of normalcy, while the US continued to struggle. Daily cases of COVID-19 in Germany were less than 500 per day at the time. In the U.S., that number was over 20,000.

Since Wentzel did not have a goal to defend during lockdown, his training went back to the basics. Elon’s Sports Performance program provided him with old-school, low-tech workouts. Wentzel said that while he was at home, he was doing lower body workouts with a backpack stuffed with textbooks.

Wentzel had to have tough conversations with his parents, friends and doctors on how to return to his second home in Elon.

“Thankfully my parents were always very encouraging of my decisions that I wanted to go back to the U.S.,” Wentzel said. “Health doctors that our family friends have really warned me that this is not something to take relaxed — it’s a pandemic, right? — and that soccer shouldn’t be the only thing that I should worry about.”

Still, there was another obstacle standing in Wentzel’s return to Elon. Back in March, U.S. Immigration and Customs Enforcement created regulations forbidding international college students from returning to campus if classes were 100% online. This stayed in effect until late July, just a week before Wentzel made his return to the States.

“It really took me a lot of phone calls just to confirm that I have my new travel documents,” Wentzel said. “I had a few days to fill everything out. And I got through the border, so I’m happy to be here.”

Stepping foot on Elon’s campus marked the end of a hectic summer for Wentzel and his teammates. Half of the players on the Elon men’s soccer’s roster are international student-athletes. Wentzel said almost all of them chose to fly home during the pandemic. Many of the players live together in apartments, so to see each other again during move-in brought solace upon Wentzel.

“We’re not only teammates, because we are the closest friend group as well on campus,” Wentzel said. “So being able to see our teammates and friends, yeah, it was a mix of relief and also joy.”

On Aug. 10, Elon University announced the plan to postpone all fall sports competition. The Phoenix will not return to Rudd Field until potentially the spring. For Wentzel, this news is disappointing, but he has come to terms with this new “normal.”

“We’re just happy to be back and, thankfully, practice together,” Wentzel said.