One Elon basketball player's experience with race in athletics 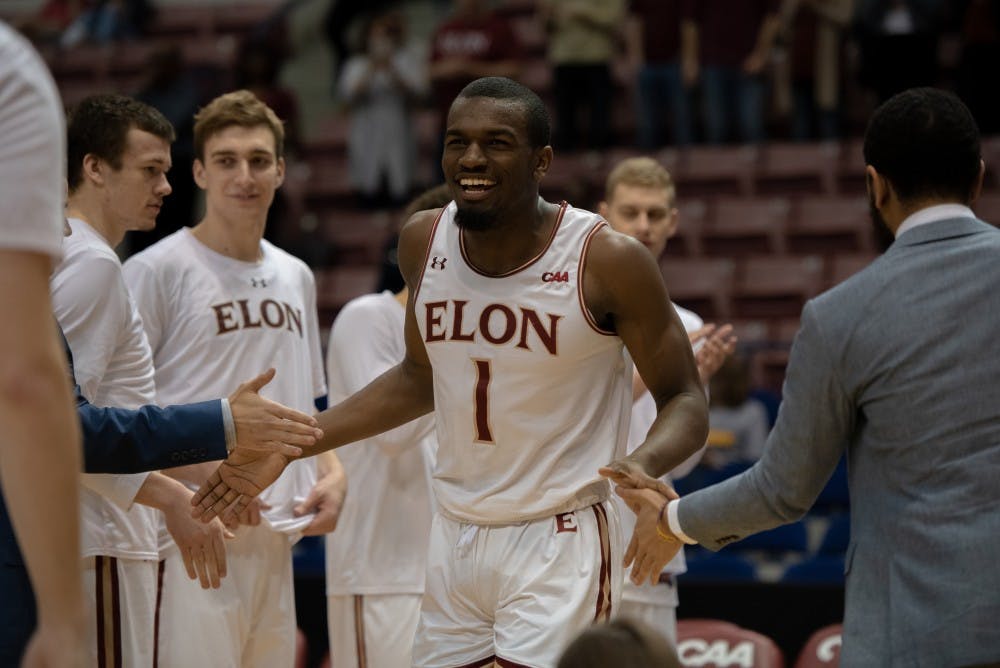 
Freshman forward Chuck Hannah smiles as his name is announced before the start of the game on Mar. 9, 2019 in the North Charleston Coliseum.

Chuck Hannah was just a high schooler when he started to become aware of what “code-switching” was. Growing up in suburban areas, the now-Elon University junior and men’s basketball player found himself changing his appearance and actions to fit in with his peers.

Listen to this story below:

Hannah said he felt pressured to act this way because he already came into school feeling like the “lesser group,” as he described it. He didn’t want to fit the stereotype of “being a Black kid from the inner city.”

“I kind of realized, like, ‘This isn’t normal, this isn’t something I should have to do,’ but it’s what I felt like I needed to do,” Hannah said. “I’ve literally had people telling me like, ‘Hey, you’re not what I expected you to be.’ When you hear that, that’s when you know that you’ve done a really good job at code switching, or people just don’t try and take the extra mile to get to know you besides looking at you and having their own biases about you.”

“I’m not trying to discredit any sport, but I do feel like athletics as a whole does contribute a lot to the university’s overall percentage of people of color,” Hannah said. “At the same time, even though we are growing everything, it’s nice to form relationships outside of athletics. I think that with things like the [Center for Race, Ethnicity & Diversity Education] and stuff like that, those resources that are in place to support people of color are helpful as well.”

“Generally, it’s right around 35 to 36% of the African American males or the Black males on campus are student-athletes, and it’s sort of lingered around 20% of the Black female students on campus,” Shearer said. “When I got to Elon many years ago, that number was actually above 40%, at one point, for Black male students.”

Hannah said he has recognized the efforts made by the university to increase diversity on campus since he came to Elon. He has had insightful conversations with Elon President Connie Book where she has talked about her commitment to change the school’s culture and try to make students of color on campus feel more comfortable. As both Shearer and Hannah said, however, student-athletes can face their own forms of discrimination on college campuses.

Hannah said he sometimes does face a sort of athletic discrimination, something he said he feels when people assume that he plays basketball or assumes he plays a sport.

“Sometimes I kind of do this thing where, like, I’m trying to mess with people a little bit when they assume I play basketball. I tell them I did, like, water polo or something just to see how they react. If they lean backwards, then I’m like, ‘Alright, cool, I just broke every bias you had towards me,’” Hannah said.

“Growing up, I had teachers in middle school ... the first time they ever spoke to me and they told me, like, ‘Do you know what I’m going to ask you correct?’ And I’m like, ‘I don’t know what you’re gonna ask me. I don’t know who you are.’ And they said, ‘Do you play basketball?’” Hannah said. “Why is it the first question that’s asked to me instead of like, ‘Oh, is it your first year here?’”

This summer, Hannah and the members of the Elon athletic community had conversations about race relations due to the increase of Black Lives Matter protests in response to police brutality across America. Shearer said coaches have tried to have more conversations with their teams, and she also said that Elon Athletics is forming a diversity advisory committee to help lead these conversations.

On June 4, Elon Athletics hosted a discussion with all student- athletes and a panel of athletics coaches and staff, university staff, a retired highway patrol trooper, local pastors, and a former Elon student- athlete of Elon and former town of Elon police chief. At the end of the discussion, everyone was given a domino. Chuck Hannah, a junior and men’s basketball player, was at the discussion, and has kept that domino in his bag since the discussion.

"It's just asking for people like me and myself to just be seen on an equal playing field, not that when we start the race I'll start 50 yards back compared to somebody that way."

“The whole point was for it to flip every day, and that symbolizes that you’ve impacted one person or somebody throughout that day,” Hannah said. “So I keep it in my bag and I look at it. I open up the front part of my bag to see if it’s flipped sides. Then if it does, I think about the whole day and what I’ve done to maybe have it flip sides.”

Professional sports teams across the United States have taken part in “silent protests” that include kneeling during the national anthem, taking a moment of silence once a game starts and even walking off the field or court during play. Hannah said that although his team has not specifically talked about silent protests yet, he said that if the team does decide to participate in one, he does not fear resistance from his coaching staff. He said they are “all on the same page.”

“When talking about race relations, when talking about Black Lives Matter, anything that involves injustices that are going on, it’s important to understand that it’s not, it’s really not a political issue,” Hannah said. “It’s just asking for people like me and myself to just be seen on an equal playing field, not that when we start the race I’ll start 50 yards back compared to somebody that way.”