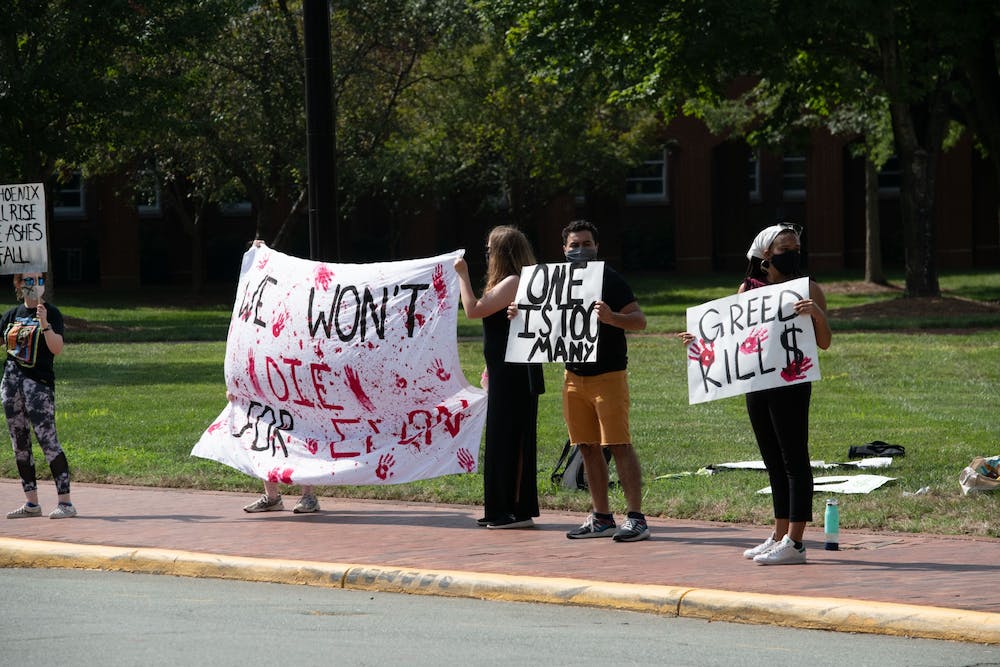 
Many Elon University students attended a Die-In protest in front of Young Commons off East Haggard Avenue on Thursday, Aug. 13.

People that drove past the center of campus — a stretch of open land on East Haggard Avenue — were greeted with students protesting the university’s plans to reopen.

The Boldly Elon Solidarity Collective — a coalition of student organizations calling for policy change on campus —  organized a “die-in” on Moseley Front Lawn.

The BESC accused the university of valuing “their own financial interests over the lives of Elon students, faculty, staff and Alamance County community members,” and have cited the state of North Carolina’s increase in hospitalizations as a reason for an unsafe in-person semester, according to an announcement about the die-in on Instagram.

Fourth-year Elon student William Bruno is part of Elon ROSE — which stands for Revolutionizing Our Student Experience — which is an organization a part of the BESC. Bruno said the Ready and Resilient plan is not sufficient because it was prematurely created.

“We’ve tried to communicate that to them and they continuously dug their heels in,” Bruno said.

Bruno said he has expressed his concerns about the plan with Vice President for Student Life Jon Dooley and the Ready & Resilient committee.

Elon University President Connie Book told Elon News Network in an interview that she hears the concerns of students participating in the die-in, and says she understands it if students are taking a semester off if they do not feel comfortable with in-person instruction.

“I hear that. I heard their concerns and also, it's okay if this isn't the right time to press forward in your education. It's okay to take a semester,” Book said.

The die-in comes after the coalition hosted a webinar in early August that discussed the university’s decision to reopen, along with a list of demands addressed to Elon President Connie Book that were created at a prior meeting.

One of the demands includes removing attendance policies and pass/fail grading like in the spring semester. They also want the university to allow all students to choose to engage in-person, according to the list of demands and a petition.

Despite this demand, the university has outlined in the “Academics and Classrooms” section of the Ready and Resilient website that “all health-related absences are excused.” The deadline to request for remote-only instruction through the Office of Disability Resources has passed — according to the same section.

Recently, several adjunct professors’ contracts were not renewed for the fall semester. BESC has also launched a #DoBetterElon campaign along with Elon ROSE, which asks people to not recommend the university on social media because of Elon’s actions regarding adjuncts, racial injustice and financial transparency.

BESC is also calling for Book, and other members of senior staff to take a 25% pay cut to help “the most vulnerable, lowest paid” faculty and staff keep their jobs.