Off-campus students in quarantine were being counted, but were not reflected in the university’s quarantine dashboard as a way to reflect the remaining quarantine spaces 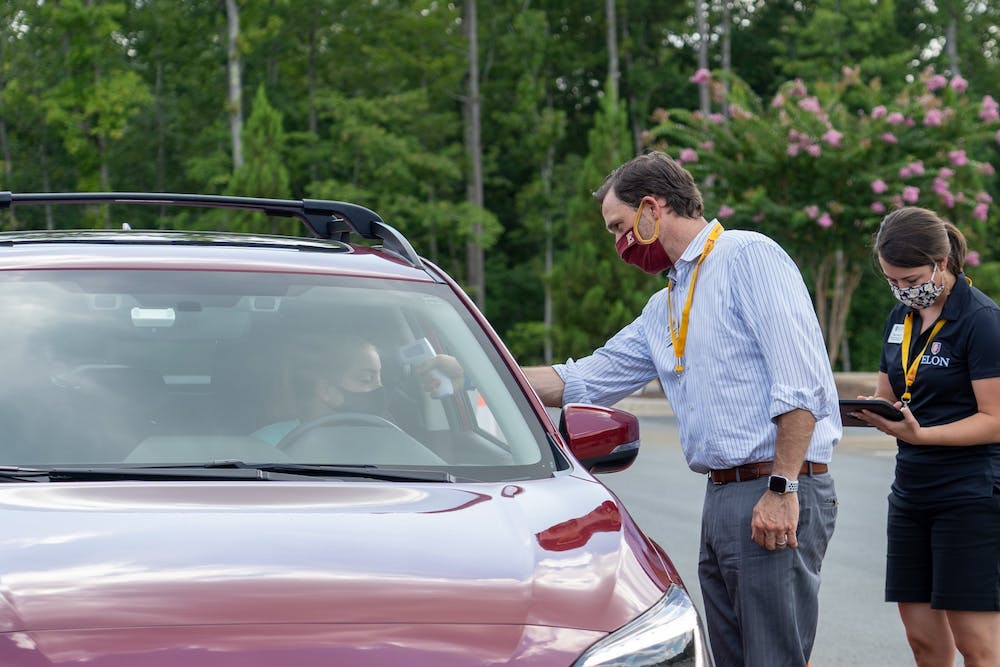 Photo by Clare Grant | Elon News Network
On Monday, Aug. 10, Senior Director of Development Tait Arend takes the teperature of a student going through the health check-in while Develpoment Research Anayst Megan Gregg verifies that all of the required steps have been completed. The steps can be found on Elon's Ready and Resilient webpage.

The Elon University COVID-19 dashboard is now showing data representing all students in quarantine, including those who live off-campus or in single rooms, according to Owen Covington, director of Elon University News Bureau.

Originally, students who were quarantined in single rooms or in off-campus housing were not reflected on the university’s quarantine dashboard online, although they were being counted, according to Covington.

Although the off-campus students were being counted in coronavirus numbers, according to Covington, the original intent of the quarantine dashboard was to reflect the remaining amount of quarantine spaces at the university.

This comes after a student expressed concerns over the dashboard online.

Elon student Kelly Simonson made a TikTok — which was later posted to Twitter — on Monday reviewing screenshots of Elon University’s COVID-19 dashboard. In her video, she said that even after she contracted the virus and put six other people in quarantine, she and the other students were not being represented on the dashboard.

Simonson said originally she made the TikTok just to vent, but more people ended up sharing her thoughts than she anticipated.

“I called it a conspiracy theory on my Twitter, and while I was being a little tongue-in-cheek, part of me was like, ‘I’ve been in isolation for a week with nothing but these semi-paranoid thoughts, let me ask my audience,’” Simonson said. “My audience ended up being bigger and more affirming than I anticipated.”

Cynthia Simonson, Kelly Simonson’s mother, said that although she didn’t feel like the university was purposely trying to mislead people, there was a gap in the original data.

After her daughter’s video went up, however, she said it was only a matter of hours before the website was updated reflecting all of the data for students in quarantine.

“Before I could even find the number to call the right person to get it taken care of, it was already done, which is really to Elon’s credit,” Cynthia Simonson said. “So they updated the page to include her now after her video went up.”

There are currently 62 students in quarantine and 17 cases of COVID-19 on campus, while Alamance County has reported a cumulative total of 2,955 lab-confirmed cases as of today.