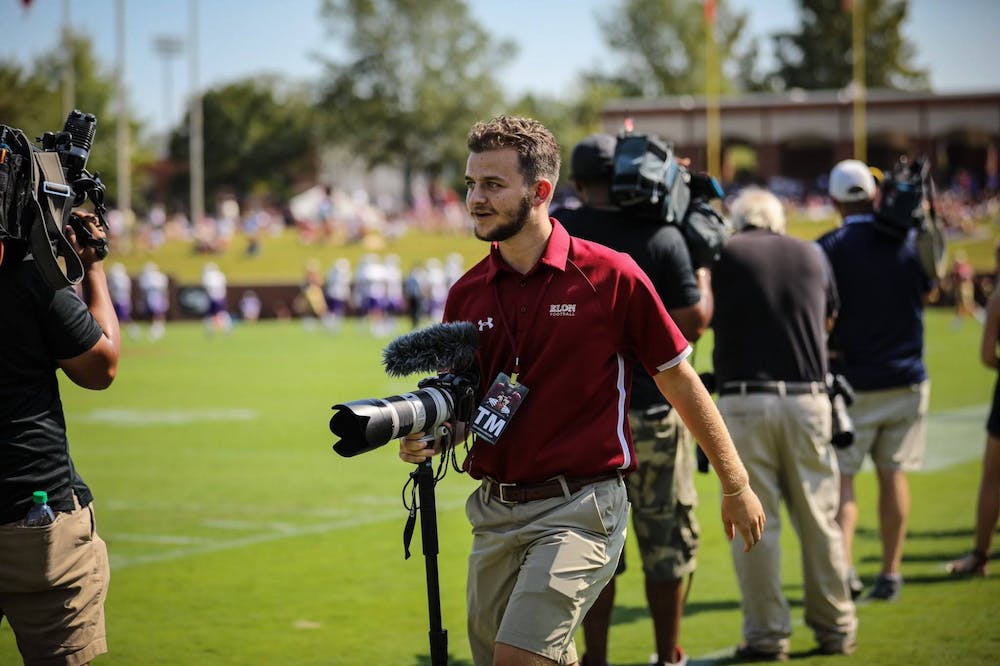 When senior Peter Fortunato first picked up a camera during his internship with the Durham Bulls, it would start a years-long journey that got him to be the new interim video and graphics coordinator for the Elon University athletic department. After working for Elon Athletics — which is under a hiring freeze due to the coronavirus pandemic — for three years as an assistant to the video coordinator, he has been promoted to the leader as the new interim video and graphics coordinator.

“I’ve had people teach me up until sophomore year. I had phenomenal mentors, and junior year rolled around, and ... people are looking to me to teach them,” Fortunato said.

Fortunato’s roommate since sophomore year, senior Emmanuel Tobe, has watched Fortunato’s development since both of them interned with the Durham Bulls seven years ago. Since then, the two have worked together at WRAL-TV and co-produced the show “Elon Phoenix Weekly.”

“Because I’ve known him so long, I don’t think there is, between me and him, a work relationship and a friend relationship,” Tobe said. “He’s a workaholic, has a hard work ethic, one of the best work ethics I’ve ever seen. But he’s also extremely passionate about it as well. Pretty much every project that he does, he’s always passionate and wants it to be amazing, wants it to be great.”

Fortunato said it is unusual for a student at Elon to be hired as a full-time worker under athletics. He said being a part-time student this semester will help him complete his work duties, which he said was a factor in being hired.

"It is really cool to say that I have this position still as a student because not a lot of people in the entire country can say they are in a similar position as I am."

“It’s hard to say if this is normal ... I hate to say these are ‘unnormal’ times, these are weird times,” Fortunato said. “It is really cool to say that I have this position still as a student because not a lot of people in the entire country can say they are in a similar position as I am.”

Fortunato, a cinema major, has been a sports fan his whole life, and found his interest in video production in high school. Growing up in Apex, North Carolina, he said the close proximity to home from Elon was nice, but it was the strength of the cinema program Elon offered that drew his commitment.

Fortunato has been involved in video production with the Elon Phoenix since arriving on campus. He started out as a videographer for football practices, where his videos were what the team used to analyze their practices later. This connection would later introduce him to “The Spark.”

“As I was in the office more, I started seeing other students editing videos, and at the time, we were editing ‘The Spark,’ which was the documentary series that we were doing. I was like ‘oh this is really cool. How do I learn to do that?’” Fortunato said. “So there were a couple of students who really showed me early on what the world of creative content for sports really looks like. Then sophomore year rolled around, it was just more learning, learning, learning, learning. Then junior year, when they graduated, it was ‘alright Peter, it’s your show,’ and now we’re here.”

Fortunato completed four episodes for his sophomore year documentary series named “The Gold Standard,” along with photography and social media work. His junior year, he studied abroad in the spring, but was sent home early due to the coronavirus pandemic. Before he went abroad, he said he led the video efforts for football and made highlight videos for the players frequently.

Normally, Fortunato would be knee-deep in preseason coverage for football, and would be preparing for what would’ve been the Phoenix opening game against The Citadel.

“A lot of that would be helping our coaches with our coaches’ videos, making sure practices are being filmed correctly, making sure they’re getting the right film from other teams,” Fortunato said. “Then also making sure our social content looks good, like making sure fans, recruits, donors and the Elon communities are excited for the fall.”

Because of the ongoing coronavirus pandemic, Fortunato said his job now focuses less on video production and more on social content. He said now is the chance to focus on the full student-athlete experience to show recruits the full potential of Elon athletics.

“They’re student-athletes for a reason; student first and then athletes. So, it’s interesting now that they’re ‘not an athlete,’ they’re not on the field,” Fortunato said. “It’s an interesting time for us to really explore different avenues. How can we really show the student-athlete experience at Elon University? And why is it better for a student-athlete to come here versus James Madison?”

Tobe said Fortunato’s developmental experience has made him well-equipped to handle his new job. He said the way Fortunato has created content has changed, but also the way that he’s consumed media has helped him become a better leader.

“I remember his first TV video, I was in his room when he was making it, and he wasn’t putting in, let’s just say, the most time for the project. It probably didn’t come out the way that he wanted to,” Tobe said. “He has grown to not just someone who is interested in creating content, but someone who actively talks about creating content. He talks about different ways, different forums, we have conversations about the emergence of TikTok and all these kinds of different avenues of content creation. So to see his mind expand along with his overall technical skills has been cool to see.”

Tobe wishes his friend of seven years just one thing from this experience: happiness.

“I think senior year, as much as it’s a time to look forward, it’s also a kind of a time to look back and evaluate things, and to really celebrate where you’ve gotten,” Tobe said. “Right now, it’s such a stressful time worrying about jobs, the economy, masks, whatever, but I just hope that with the position that he has, I hope he spends time celebrating the work that he’s put in to get to where he is.”

Fortunato said although he hasn’t thought too hard about what he’s going to do once he graduates, he says he will always be thankful for Elon Athletics for giving him the opportunity to grow.

“They gave me a chance, but they also trusted a kid, they believed in a kid since freshman year all the way up until now,” Fortunato said. “They’ve been super supportive of me, and I wouldn’t be in this position if it wasn’t for them, if it wasn’t for the people in this athletic department that helped train me up for my three years and supported me.”