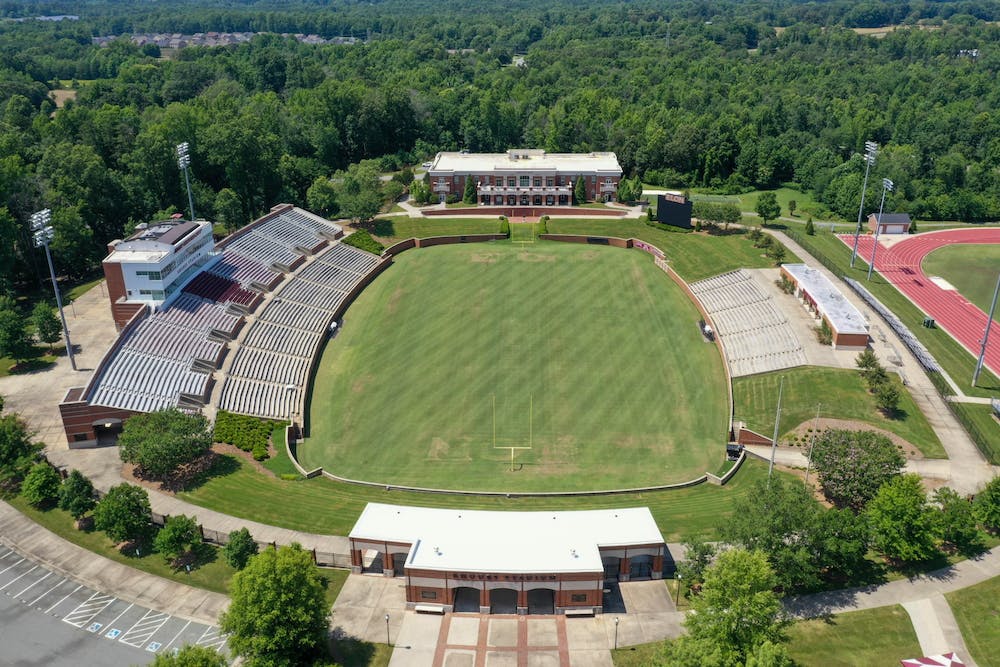 
An aerial view of Rhodes Stadium at Elon University.

Updated at 3:17 p.m. on July 17 with quotes from football head coach Tony Trisciani.

The Colonial Athletic Association announced July 17 that it will not have any games played under the CAA during the fall of 2020. However, the option to play in the Football Championship Subdivision still remains, which Elon University plans to take advantage of this fall.

"As we each navigate this pandemic, we recognize that each of our ten members must rely on local and state guidance, as well as medical expertise that may result in different decisions and different timelines for each institution," the CAA Board of Directors said in a statement released by Rob Washburn. "Therefore, we support each other and the unique circumstances of each of our campuses and communities to make decisions that are best for them."

The CAA now joins almost a half dozen other conferences in responding to the coronavirus pandemic. Among them were the Big Ten, which announced it would play in-conference games only, followed by Mid-Eastern Athletic Conference, which announced that fall sports would be suspended just one week later.

In an email sent to fall sport athletes this afternoon, Director of Athletics Dave Blank said, “Our intention is to continue to monitor the pandemic situation and pursue the ability to compete in our fall sports as long as it is safe to do so.”

The email also noted this is a fluid situation and plans may change based on how the situation develops.

Football head coach Tony Trisciani said players were brought in at staggered times and the team has been following protocols set out by the university, local government and their sports medicine team since June.

"Our players are always masked, we try to keep them six feet apart and avoid any gatherings," Trisciani said. "We're not ready to go out body-on-body and play football today, but fortunately we don't have to today ... We're doing right by them."

Trisciani said that should a player test positive they will follow the same protocols that have been set out by Elon. The second-year head coach declined to say if any players have tested positive so far and said he does not believe that information will be made available at any point.

The NCAA has yet to announce if athletes who have had their season cancelled will receive another year of eligibility.