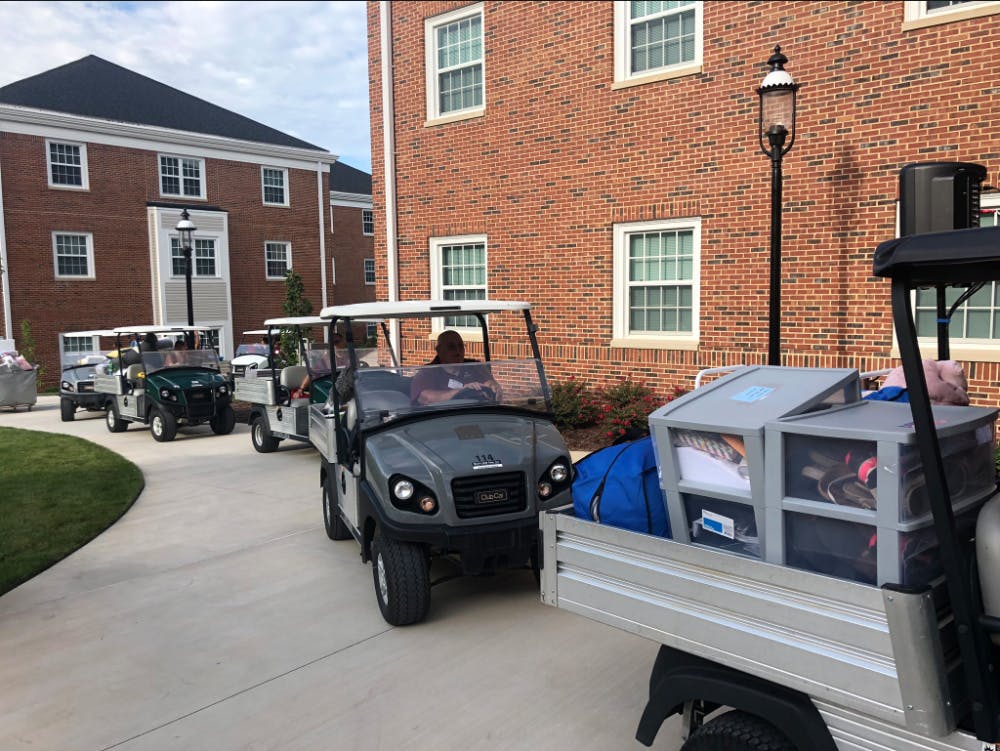 Correction on May 5 at 8:10 p.m. — As of May 5 about 1,000 students have moved out already according to MarQuita Barker, director of Residence Life. Elon News Network regrets this error.

Freshman Sarah Hicks is preparing for the 3,000-mile flight from her home in Oregon back to Elon University. With help from her mother, Hicks is committed to moving out herself and three other students —  her mom offered in a post on an Elon parent's Facebook group to move out students worried about traveling.

Elon is asking more than 4,100 students living on-campus to move out before May 31 — Hicks is one of them. Over 80% of the approximately 7,000 Elon students are from out of state. This means many students will have to cross state borders, use a packing service or find an alternative way to move out.

For three students, Hicks and her mother are an alternative. The Hicks have agreed to move them out for less than the price of a moving company.

“It is just kind of an easy way to make money,” Hicks said. “Also, it is going to be nice to help other people out that are worried about flying, or just can't come for whatever reason.”

The only residents exempt from moving out are the approximately 200 students renewing their leases for on-campus apartments in The Oaks Neighborhood, Danieley Neighborhood, Crest Apartments and the Station at Mill Point.

The university is allowing students to move out themselves, but are asking them to take precautions.

"When they come back, they should try to limit the amount of people who are coming with them. Don't travel if you're sick, wash your hands, use a mask and practice social distancing."

“When they come back, they should try to limit the amount of people who are coming with them,” said MarQuita Barker, director of Residence Life. “Don't travel if you're sick, wash your hands, use a mask and practice social distancing. Roommates, for example, might want to coordinate when one is coming versus the other, so they're not around each other.”

Hicks and her mom are taking this into account.

“We're gonna take precautions. We all have masks and we're gonna be sanitized and whatnot,” Hicks said. “But yeah, we're not worried at all. ”

When deciding what precautions to take during move-out Barker said Elon searched for inspiration.

“We did look at other universities and what they're doing,” Barker said. “But you have to understand that universities are so different, the size and the student population. So what works, for example, for UNC Chapel Hill might not work for Elon.”

Barker said Elon looked at “hundreds” of other institutions but declined to name any directly.

Both universities are starting their move-out process after the stay-at-home order has been lifted and are scheduling students to move-out during specific time slots. To avoid large gatherings, each time slot has a limited number of openings. High Point is having students register any guests they bring with them to campus and Wake Forest is limiting students to a maximum of two guests.

Also, at Wake Forest any students who cannot make it to campus, the administration is offering to pay to pack-and-store student’s belongings at no charge.

To try to comply with social distancing, Elon is having all residents do Express Check — a process in which students move out without a residence advisor's approval that they have done so completely. Typically, the university discourages this type of move-out because students cannot fight any damages they are charged with if they move-out this way.

“We're being a little bit more flexible in that policy,” Barker said.

Elon chose not to assign time slots for residents to make moving out easier for students, according to Barker.

“We haven't done that because we know it's hard enough to get people to come back if they're not here. So we really need people to come at a time that works for them,” Barker said. “We are expecting people, like I said, to figure out the schedule with their roommates, but because this process is so spread out over the next few weeks, we're not really concerned about there being hundreds of people in the same hall or something like that. A lot of people have already moved out.”

As of  May 5, about 1,000 students have moved out already, according to Barker.

Hicks is not worried about social distancing or there being too many people on campus during move-out.

“I think that since everyone's kind of overly conscious about it. It's not going to be that difficult,” Hicks said.

For students who are having trouble getting to campus, Elon provided a list of moving companies in an email sent by Whitney Gregory, assistant dean of students. The list included College Truckers, Storage Scholars and Alamance Movers.

Freshman Claire Seward chose to use a packing service because both her parents are doctors and work six to seven days a week.

“It just doesn't make sense for us to be able to find a time to be able to go to Elon during this pandemic, because they're really needed right now at their job,” Seward said. “So the packing service just made the most sense for my family and our needs for me to get my stuff because I just don't think we would even have a free weekend for all of us to be able to go down.”

Seward and her family are using College Truckers. They were able to do this because College Truckers just added a packing service due to the coronavirus pandemic, so students, like Seward, would not need to come to campus. College Truckers and Storage Scholar  — who also recently added this service  —   are providing this assistance at no additional cost to students.

“We know a lot of students are going to need help financially so that we didn't really want to charge people extra for that,” said senior Zach Weidemann, a Storage Scholar representative.

Once the items are packed up both companies offer to either store student’s belongings or to mail them to their homes. Prices vary for both services based on size and weight of items.

According to Barker, as of May 5, only an estimated 200 to 250 of students on-campus are using packing services. Storage Scholars alone are able to move out many more students than this.

“Theoretically, we should be able to service upwards of 2,000 [students] if need be,” Weidemann said.

As of May 5, approximately 1,400 students are either using a packing service, renewing their lease, or have already moved out. This means there are about 2,700 students who have yet to move-out off-campus. They must do so by May 31 because housing leases for new residents living in on-campus apartments begin June 15 and the university still has plans to use housing this summer.

“We're trying to encourage people to leave because we do need to use these places in the summer, for summer school, we use them for camps, conferences. So students will need to figure out a way to get their belongings,” Barker said.

In these circumstances, Hicks thought Elon did what it could to help the move-out process.

“I don't think that there was really any alternative,” Hicks said.

According to Barker, this whole experience has been a reminder of how student-focused Elon is.

“We make our policies to accommodate students as much as we can,” Barker said. “We know that we can't make everyone happy, but we definitely have the best interest of all of our students.”