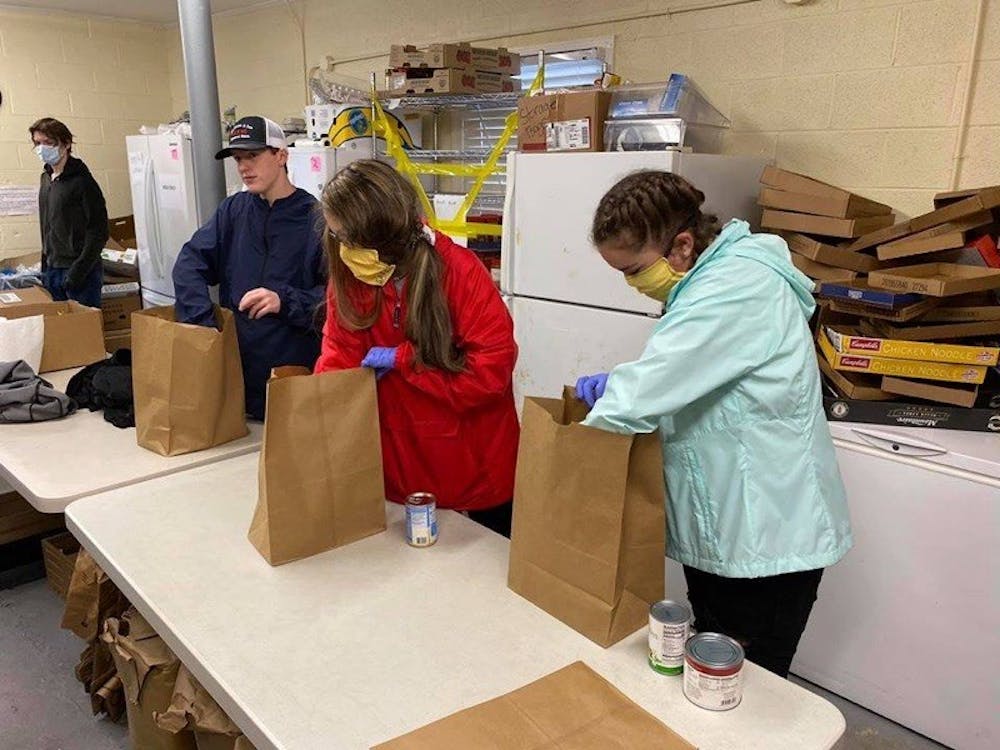 Lynne Pierce remembers handing out food when an elderly lady approached her crying. The woman is raising three teenage boys and did not know how much longer she could provide food for them because of the coronavirus.

Pierce told her “If you run out, contact us.”

Pierce is a single mother and has been working for non-profits for 20 years. Currently, she is the director of Southern Alamance Family Empowerment ministry — a food pantry in Graham started by seven local churches.

Pierce said in 2019, SAFE food pantry handed out an average of 341 bags of groceries a month. This March, SAFE handed out close to 1,000 bags.

As of April 23, unemployment claims in North Carolina per week have increased by about 98% since mid-March, according to David Rhodes at the North Carolina Department of Commerce.

No data about Alamance county has been published yet.

Families usually come to SAFE once a month to pick up two bags of food containing a mix of perishable and non-perishable items as well as pet food, paper products and cleaning supplies when available.

Since the outbreak of the virus, SAFE has made changes to accommodate the increase in demand. Pierce says now families are coming as frequently as once a week to receive food. Among the returning families are new faces. According to Pierce, there has been a 710% increase in new families at the pantry because coronavirus has left more families without enough money for food.

Despite the increase in demand, Pierce said she is not worried the food pantry will run out of food or money.

“God has always seen that our needs are met,” Pierce said.

"God has always seen that our needs are met."

Food to stock the pantry is gathered in three ways. Food is donated by local farmers when they have an excess of fresh produce, other nonprofits when they have an overflow of donations and private citizens. Money to buy food themselves also comes to SAFE from religious organizations, community members and grants. Pierce said the monetary donations go a long way, especially now. SAFE went from spending $800 to $5,000 a month on food since the viral outbreak began.

According to Pierce, SAFE has received $37,000 in grants and is expecting $20,000 more. Social media has also helped to fundraise. A Facebook fundraiser last month raised $3,745.

SAFE also fundraises through local employers’ match programs. In a match program employers pledge to match donations made by employees up to a certain amount. This is one way volunteer Joy Fanning-Mazur gives to SAFE, but it is not only her donating.

“I have noticed that there has been a greater need for donations and people have stepped up and we're very grateful for that,” Fanning-Mazur said.

The coronavirus has brought many changes to the pantry’s operation. Most of SAFE's regular volunteers are over 60-years-old, which means they are at a higher risk of contracting the virus. Pierce asked them to stay home and she started recruiting younger, lower-risk volunteers.

"So many new community members showed up that we had to send people home," Pierce said.

Pierce sent volunteers home because she felt it would violate social distancing guidelines and be counter-productive. Now, there are only five volunteers in addition to Pierce and another full-time employee. But Pierce says that is subject to change.

"At the rate that our numbers are going up, there's just no way that we can continue to do it with just us seven,” Pierce said. “It is just too much."

Another way the pantry is changing due to coronavirus is the kids’ food bags. This service usually runs in the summer when school is closed and students lose access to free or reduced-price meals. Now it runs every Thursday. Families with children get seven days’ worth of breakfast, lunch and snacks.

Pierce expressed concern over the early start of the program because the pantry’s budget was not prepared for this.

“I'm almost a little scared about how many children it is going to involve,” Pierce said.

Pierce said she handed out 157 kids’ bags last Thursday. She expects the number to increase once summer starts.

“We're going to make a plan, pray about it, and we're going to keep putting grant money [towards the kids’ bags],” Pierce said.

Since social distancing guidelines have been implemented, SAFE has halted its application process for new families and now requires all families to pick up their groceries curbside instead of walking into the building.

Pierce said families are missing the personal interactions with staff with the new drive-thru system.

“A lot of them really need to have that one-on-one with our staff members. They build that trust. So when they have issues other than food, they're comfortable to tell us,” Pierce said. “We really believe in order to help somebody you have to know them.”

Once the coronavirus has slowed, Pierce says she not only looks forward to reconnecting with old families but getting to know the new ones as well.

“Our hope is that when things settle down, those that are in need are now aware of what SAFE is and when we come back, we'll be able to connect them with local resources,” Pierce said.