A new segment of NC’s state trail, the Mountains-to-Sea trail, has been added near Guilford County 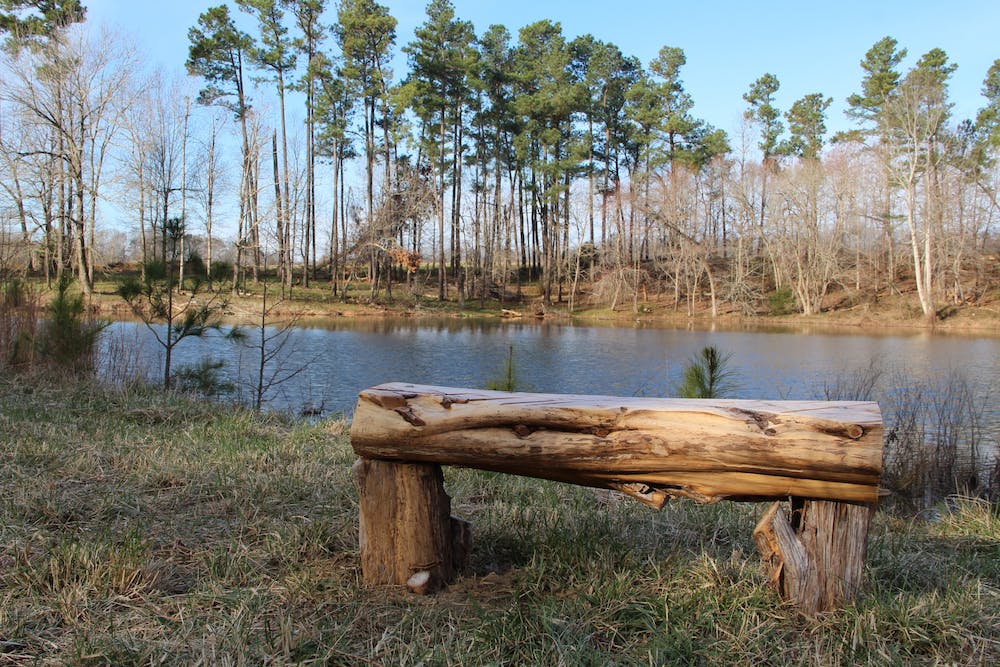 Photo by Victoria Traxler | Elon News Network
The new trail — named the Chain Gang Connector — is 1.8 miles long and is a less than 10 minute drive from Elon University’s campus.

A new segment has been added to the Mountains-to-Sea Trail near Guilford County Farm, creating new opportunities for people to connect with North Carolina’s outdoors. The trail is a 10-minute drive from Elon’s campus.

The segment creates a 1.8 mile loop when combined with an existing trail for community members and hikers to enjoy. The loop goes through a wooded area, past a pond and over a small creek.

Both trails connect to the 60.1 miles of MST that run through the Piedmont Triad — the region including Greensboro, Winston-Salem and High Point — known as Segment 9: Revolution and Textiles. The entire MST is nearly 1,200 miles.

The MST is a state trail stretching from the Great Smoky Mountains to the beaches of the Outer Banks. The trail starts at Clingman’s Dome at the border of North Carolina and Tennessee, and ends in Nags Head, North Carolina. There are 18 segments of the trail, with Elon located in the ninth segment.

The trail is primarily maintained by the Friends of the Mountain to Sea Trail, a volunteer, community-based organization run throughout the state. The Friends have trail crew leaders for each segment who are in charge of maintaining and facilitating their sections.

Greg Yahn, trail leader for the Upper Haw River region of the ninth segment, has been a part of the Friends since 2009 and a leader since 2014. He is also one of the 115 people who have reported completing the MST, according to the Friends of the Mountain to Sea Trail.

“This is one of those things that’s an enjoyable thing to do and you learn a lot about North Carolina while you’re at it,” Yahn said.

He completed the trail in 2014 after section-hiking it for three years. Continuous hikers, who attempt to complete the trail in one go, can expect to finish within three to four months, according to the organization.

During his time with the Friends program, Yahn has overseen and participated in the maintenance of the trail and worked with local governments. This includes supervisor for Guilford County Farm, John Gladstone.

Gladstone has hiked the ninth segment of the MST. He said he enjoyed the walk by the old prison that is now Guilford County Farm, through wooded areas and crop fields.

“That’s what I think the MST offers,” Gladstone said. “It’s that uniqueness all the way, you get the peaks of the mountains to the coast and everything in between is this beautiful farmland.”

There are local trails that incorporate the MST in the Triad region. Gladstone said he tries to hike at least a mile every day through the local pathways and parks.

“They’re beautiful trails, and some of the trails were established, and the MST kind of winds through those trails,” Gladstone said.

Guilford County Parks and the Friends worked to create the new addition and the parking lot at the trail access point. The new trail took around a year to complete, according to Yahn and Gladstone.

About 15 to 20 volunteers meet once a month to clear trees, kill weeds and add any needed structures.

“There’s this beautiful arch bridge that one of the members built and it’s fantastic,” Gladstone said regarding the Chain Gang addition. “It’s the showpiece of the trail.”

At the moment, 47.1 miles of the 60.1 total miles run alongside roads, according to the MST. While hikers can choose to bike on these sections, both the Friends and local governments are working to take the majority of the trail off the road.

However, property lines, industrial lands and infrastructure are just a few of many obstacles in the way of changing that.

“That’s always in the conversation of how all the municipalities and organizations working with the MST — how we can make that happen?” Gladstone said. “And sometimes it’s working with neighbors that are willing to have a trail go through their yard or their woods.”

All MST sections near Elon are free and open to the public. Community members can visit the new section of the trail located by the intersection of Gibsonville-Ossipee Road and Amick Road Other trail sections of the MST are located along the Haw River in Glencoe or along the Eno River in Hillsboro.

“It is a great escape and to get outdoors, to get away from cities, the people, the traffic and to get out into nature,” Gladstone said. “There is something soothing and easing with the mind and the body to get outside for a while.”