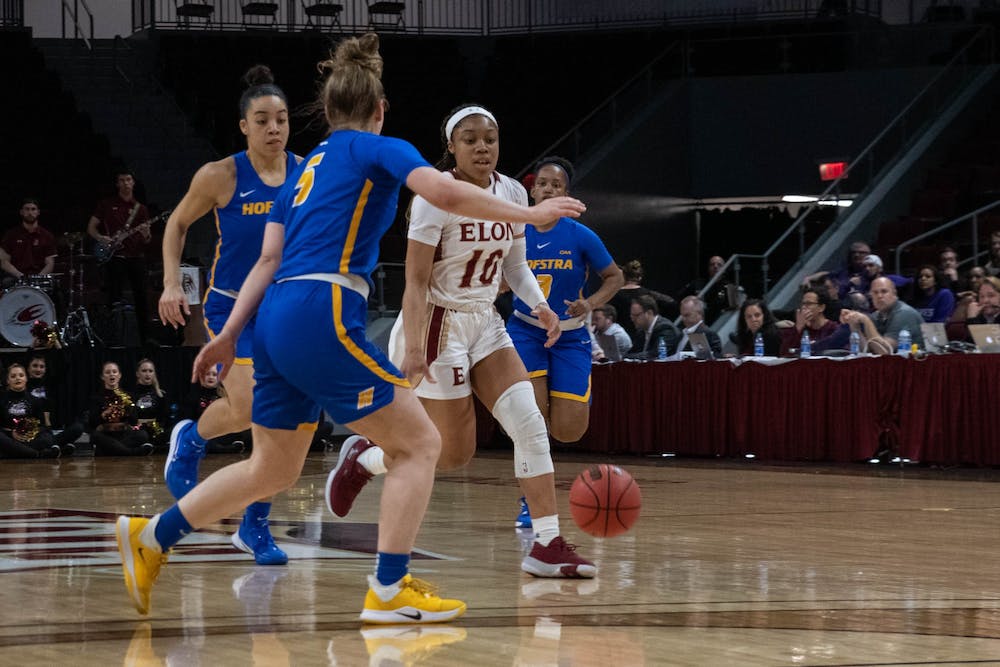 
Elon guard Saadia Munford drives to the basket after making a steal against the Hofstra Pride on March 11 during the CAA tournament in Schar Center. The Pheonix won 71-51.

Elon women’s basketball downed the tenth-seeded Hofstra Pride 71-51 in the opening round of the 2020 Colonial Athletic Association Women’s Basketball Championship. This is the first time the Schar Center has played host to a basketball conference tournament.

This was the first tournament win for the Phoenix since 2018 when the team won the entire thing and earned a berth in the NCAA tournament. Head Coach Charlotte Smith said that the difference this year from the other championship teams is that they get to defend their home court.

“I can't necessarily say that there's an advantage because we won at JMU and at Drexel  back to back championships, but it does definitely feel good to be home,” Smith said. “I guess I could say there is some advantage, we shot the ball really well. So you know, we're comfortable.”

The Phoenix were fueled by double-digit point performance by four separate players, including an unlikely 12 point performance from sophomore forward Tyja Traore off the bench. The offense was backed by a defense that forced 23 turnovers and 12 steals.

"We are big on having our defense feed into our offense and that's where we get our energy from,” junior guard Saadia Munford said. “So overall, you're able to play defense and rebound that's a good recipe to win the game.

The Pride got the early advantage in the matchup by jumping out to a 10-5 lead in the opening four minutes. The Phoenix was off to the races after that point. A 12-2 run put the Phoenix up 17-12 lead at the end of the quarter.

In the second quarter it was the Phoenix defense that stepped up. Elon held Hofstra to a mere five points in the quarter while Tarone and the offense extended the Phoenix lead. By halftime they had doubled the Pride score 34-17.

In the second half the dominance continued. The Phoenix knocked down five 3-point shots on eight attempts in the third quarter. The Phoenix ended with 71 points on the night, its highest mark since Feb. 8.

The Phoenix advance to the quarterfinals where they will face off against the second-seeded James Madison Dukes tomorrow at 5 p.m. Smith said that the team is hoping to carry the momentum from today's game into tomorrow where they face a team that has beat Elon twice already this year.

“They're a really good team so we're gonna have to put together two really good halves, Smith said. “There's some things that we can sharpen up a little bit to be prepared for our game against JMU tomorrow.”