Loaded with returning and new talent, the lacrosse team aims for its first conference final appearance 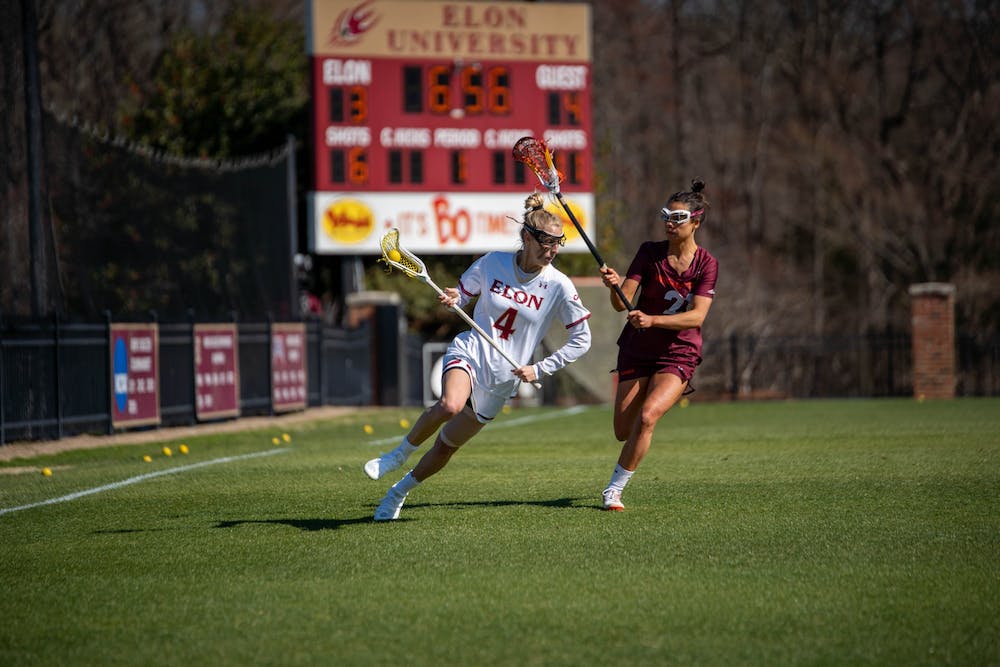 McCarthy established herself as an offensive weapon in the unranked Phoenix’s 14-7 loss to No. 22 Virginia Tech. She put up a team-high of four points with a goal and three assists.

Thompson transferred to the University of Michigan, leaving the Phoenix without the reigning Colonial Athletic Association Rookie of the Year. McCarthy took over for Thompson at the x-attack position, meaning she spends a lot of time behind the goal, reading defenses and finding open teammates.

Coach Josh Hexter referred to McCarthy’s role as the “quarterback” of the offense. Hexter said he gives her this distinction because of her ability to run the offense in addition to her passing skills.

“We’ve put a lot on Hannah’s shoulders. As a freshman, it’s a lot,” Hexter said. “As we start to grow as an offense and she becomes more comfortable in that role, I think we’re going to thrive.”

Despite having experience as the primary scorer from behind the net for her high school team, McCarthy has had to adapt her strategy on the field. Now, she has to look for experienced goal scorers and deliver accurate passes. So far, she leads the Phoenix in assists with five this season.

McCarthy said the toughest part of her position is adapting to the speed and strength of the older defenders.

“There is definitely more physicality in college lacrosse,” McCarthy said. “The biggest challenge for me was being able to have someone shove me a little and then not get a call.”

McCarthy comes to Elon as part of a freshman class that is already pushing the team forward. Her offensive counterpart, freshman Cassidy Crieghton, is tied for fourth on the team in goals scored. McCarthy and Crieghton linked up for a goal against Virginia Tech.

“We’re all competitive with each other. Like, very competitive,” McCarthy said. “We all want to take everyone’s spot, and I would say we’re all very hungry.”

There are a number of returning leaders that complement the rising young stars. These veterans, such as junior attack McGlynn, are the backbone of the team. McGlynn scored a staggering 42 goals last year, a mark that ranks third all-time for the Phoenix behind Stephanie Asher ’18 in 2015 and 2017. She was efficient from the free position, scoring a program-record 14 goals on penalty shots. So far in 2020, she has shown no signs of letting up, leading the team with 12 total points in four games.

But Hexter said he hasn’t relied on McGlynn as heavily to produce points this year. In the game against Virginia Tech, McGlynn barely saw the field. Meanwhile, younger players, such as McCarthy, Creighton and sophomore attack Cate Mackel, were able to deliver eight combined points for the Phoenix.

“Mae is almost impossible to stop one-on-one,” Hexter said. “But we have some other players who we thought might be better in the zone offense where it’s a little more hands and vision rather than straight-up dodging one-v-one.”

This balance of passers, shooters and dodgers give the offense many weapons.

Backing the team up is a defense that has veterans at its core, including senior defender Palmer Vorhees and junior defender Ashley Duggan. Senior attack/midfield Cami Lynch is another leader on the Phoenix team. She said she has high hopes for this mix of veterans and young talent.

“Out of all the years I’ve been here, we had a really great team my freshman year and played awesome, but this year, the team I would say is probably the best,” Lynch said.

Feet in the fire

In 2019, the Phoenix (6-12) took on a top 25 ranked team eight times. The team did not win a single game against those opponents. Two of the games were against James Madison University, the eventual CAA champions.

It has become routine for the Phoenix to schedule the top teams in the country. The team has three top 25 teams on the schedule in 2020. In the past five years, the Phoenix have played 37 nationally-ranked opponents. The Phoenix has not won a game against a top 25 opponent since 2017 when the team made it to its first and only NCAA tournament.

Lynch was a freshman on that storied team. Now a senior, Lynch said the competition over the years made her better.

"The competition really helps us because when conference time comes we're not afraid, we play fearless"

“We don’t really want to go out playing teams that we know we could just easily beat,” Lynch said. “The competition really helps us because when conference time comes, we’re not afraid.We play fearless.”

If the rankings remain unchanged, the Phoenix will not have another top 25 matchup until they host JMU on April 19. The CAA also contains some of the stiffest competition on the Phoenix’s schedule. The Hofstra University Pride have catapulted to the top of the conference this year, scoring 58 goals in their first four games of the season.

Despite the difficult schedule, Lynch said she and the team have aspirations to capture their first conference championship.

“This year is special because I think it’s the one year I know that we actually can potentially win our conference,” Lynch said. “Looking forward, that’s obviously our main goal: make it to the NCAA tournament. … But for now, just focusing on the little wins to get there.”