Global golfers develop from the ground up 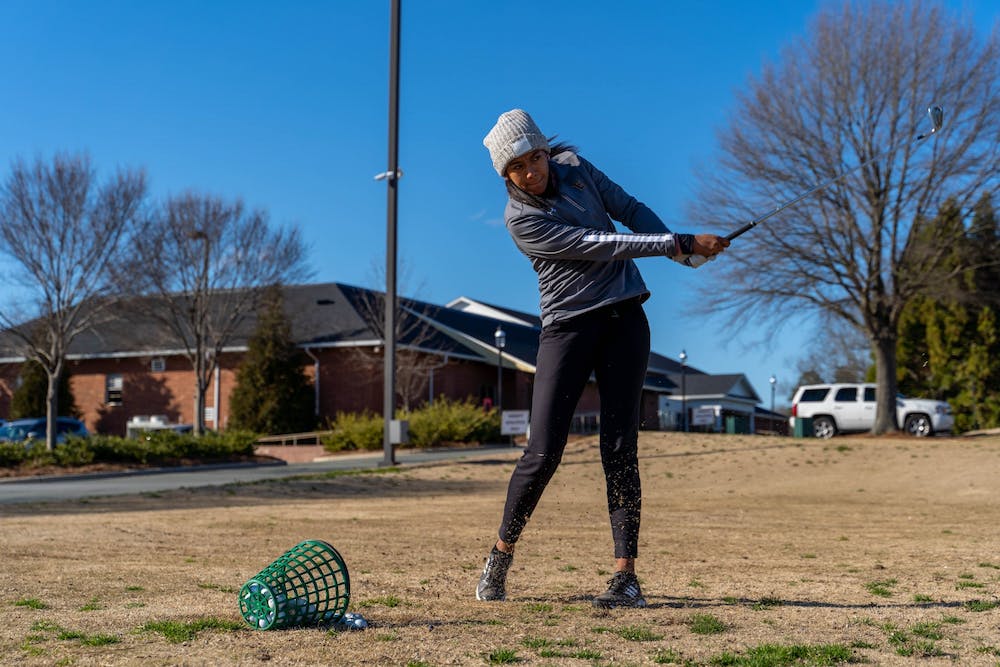 For an international student coming to the U.S. for the first time, the transition can be overwhelming. There are aspects such as new culture, new friends and for some, a new time zone to get used to.

But for golfers, one of the biggest differences, believe it or not, is the grass.

Women’s golf head coach Chris Dockrill said North Carolina grass is often unlike any surface international athletes have played on in their lives.

North Carolina grass often is unlike any surface international athletes have played on in their lives.

American golf grass can be easily divided into Bermuda, warm-season grass, and Bentgrass, cool-season grass. Elon University falls into what is called a “transitional zone,” where no native grass grows. Neither Bermuda nor Bentgrass can thrive. Due to the school’s geography, Elon golfers play on dormant grass, which is much tougher to play on, for most of the spring.

According to Dockrill, grass can have a big effect on a golfer’s game. At Elon, golf balls sit on the ground instead of being fluffed up on the grass. When the grass gets wet, it can add two to three strokes on a golfers game, which can negatively affect qualifying scores.

“You do not see this in any other country,” Dockrill said.

Dockrill has shepherded international players from all over the world, each with different backgrounds in course conditions. Two players he mentioned came to Elon from Iceland: Sunna Vidisdottir ’16 and Hilda Kristjansdottir ’18. He said these players needed time to adjust to Bermuda grass since they had never seen it before.

Women’s golf captain and junior Adel Vadkerti is from Komarom, Hungary. She said the type of grass they play on at Elon is similar to the grass in her home country. But for Vadkerti, the problem with the grass is not the density but the color.

“The grass that they have here dies during the winter, so it’s like this ugly, yellowish, brownish, something color, and I can’t really see the ball on it, and it just looks really bad,” Vadkerti said.

Vadkerti was promoted to captain this season after a strong sophomore year. Last year Vadkerti had her best performance at the Mimosa Hills Intercollegiate, where she won the individual title and led the Phoenix to a tournament win. As team captain, Vadkerti is Dockrill’s right hand. She makes sure new players are getting acclimated to Elon. Vadkerti said she is helpful to new international students because she was once in their shoes.

“She can attest to the transition, you know, coming in and how tough it is,” Dockrill said.

“That’s a great thing with the internet now, you can speak to anybody,” Dockrill said. “We set up a Skype. They get to know me; I get to know them. And we do everything over the phone or over the computer, and it’s kind of neat.”

For Yuenyong, the transition from Thailand to Elon was a big adjustment. There are over 9,000 miles in between her school and home, a 12-hour time difference, and as the Phoenix practice in the early spring in 50 degree weather, it is reaching 90 degrees in Bangkok.

“It’s been pretty good — like, better than what I expected,” Yuenyong said. “I was quite concerned at first because I haven’t lived here before. And there’s so many things I have to adjust to the environment here.”

As far as the turf goes, Yuenyong has transitioned well. Thailand has a similar latitude to southern North America, and therefore its golf courses use Bermuda grass, a staple in the southern states Elon plays in.

Transitions to Elon go past play on the course. With loved ones thousands of miles away, it can be hard for the athletes to connect with home.

There is a six-hour time difference between Elon and Vadkerti’s home in Hungary. The junior said she can’t call home during the week because by the time she gets off from practice her friends and family are asleep. This limited communication took a toll on Vadkerti. She took off her 2020 Winter Term in order to spend that time off the course and with loved ones.

International student-athletes sometimes need time to transition to the classroom as well. Players come in with different curriculum structures and different levels of English proficiency. Dockrill said he understands the strain his student-athletes are under both in and out of the classroom, and he institutes it in his coaching style. In order to have his players in the proper headspace to play golf, Dockrill allows players to skip practices in order to work on big projects. Dockrill said if players are thinking about a project they have to do after practice, they won’t be focused on their play.

“Golf is a different sport,’’ Dockrill said. “It’s balance. You have to be mentally balanced. You have to have your work done. Your mindset has got to be focused on golf. I kept telling them if you’re playing golf and you’re practicing, go focus on golf. When you’re at school, you focus on school.”

The Elon golf team is very young. Vadkerti, a junior, will be looked to as one of the most experienced players since there are no seniors on the team. Yuenyong is a part of a freshman class that may be depended on more than past first-year golfers. The team will travel to Hilton Head, South Carolina, for the Low Country Intercollegiate tournament on March 14-15.

“We have a lot of youth on the team, and we have people coming in, so I’m very excited,” Dockrill said. “You know, we had some great rounds last year, but we had some very poor rounds, you know? What I’m hoping for is consistency.”