Elon women's tennis is looking to follow through on a promise 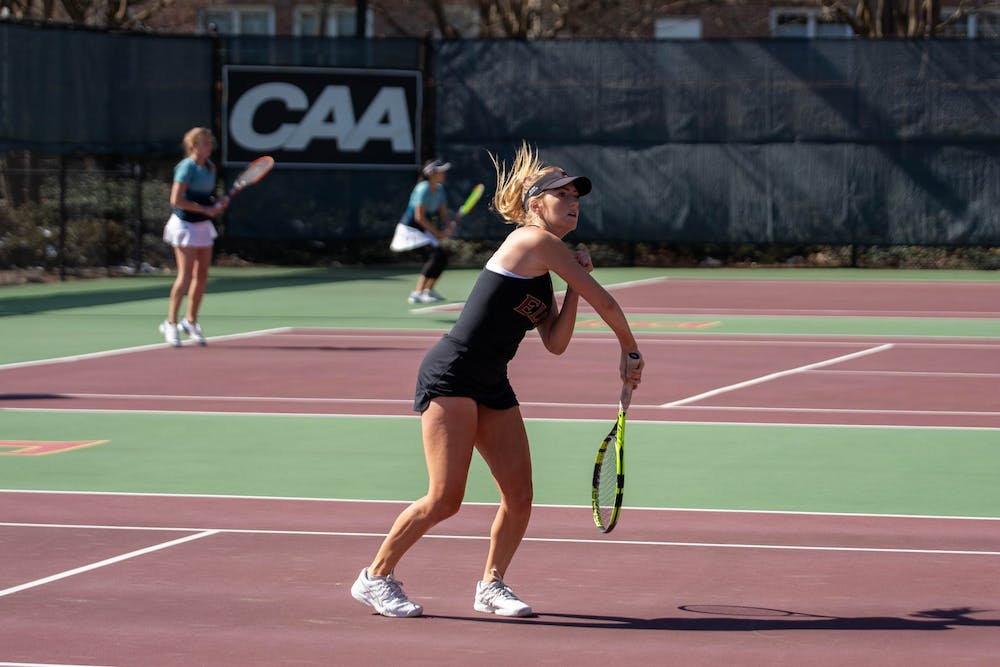 The loss of one match ended Elon University women’s tennis teams’ collective dream to make it to the conference title last year. The memory of losing to the College of William & Mary is keeping the team — especially head coach Elizabeth Anderson — motivated to achieve what last year’s team couldn’t.

Anderson said she doesn’t want to forget how it felt to come that close but still fall short. She said she reminds herself of that match for one reason: motivation.

According to Anderson, athletes never forget those types of losses. She said it’s important to look back and grow from it, a practice Anderson is trying to instill in the teams’ three new players.

“I think for them as players, also for me as a coach, it challenges you,” Anderson said. “You want to be successful, and you want the team to do the best that they can. The toughest times are the times that you learn the most. You can grow the most also as a team.”

Senior Alex Koniaev said she recognizes the mixed emotions from the girls who played William & Mary. The match came down to just one point, making some players feel as if they should’ve done more, while other players think of it with pride. But it’s a match that, like Anderson, Koniaev said she tries to remember.

“I know some players on my team, even though they played really well, and had an amazing match, and an amazing win and other people didn’t, some people kind of just try not to think about it because it was heartbreaking for them,” Koniaev said. “For me, it was a good thing to sometimes look back at it because my level was so good in that match. Sometimes I want to think like, ‘Oh, what was I doing there that made me so successful?’”

Anderson has been coaching the Phoenix for 16 years. She said this team’s ability to face adversity stands out. Anderson said as a coach, she tries her best to push all her players to be the best they can be, but when she sees the players want it for themselves — as this team has — it makes her job that much easier.

"Team culture for us is working hard. It's just doing all the little things right."

The Phoenix ended last season with a 13-12 record and graduated three seniors. The team picked up three new players this year: two current freshmen, Shauna Galvin and Kiana Rizzolo, and a transfer from the University of South Carolina Upstate, sophomore Victoria Saldh.

Saldh has wasted no time making her mark at Elon, earning her first CAA Player of the Week in February.

“It hasn’t been the easiest, as a transfer, to go from one school to another, and she just really embraced it,” Koniaev said. “Playing next to her, I thrive off of her energy. I’m just really proud of how hard she competes in every single match that she plays.”

Anderson said she recognizes Saldh’s talent and is excited to see her continue to grow.

The Phoenix has had to prove itself early, playing schools such as Duke University, University of North Carolina Chapel Hill and East Carolina University in preseason play. The Phoenix was victorious over East Carolina but fell to UNC and Duke. Although the mentality stays the same for the Phoenix regardless of its opponent, Anderson said games like those are learning opportunities.

“We pick up on some different things that they may be doing that we want to do,” Anderson said. “Their intensity level and their footwork, and they’re really getting to the balls really well. I mean, they’re very focused at that level. Sometimes some of it is a focus intensity level that separates it.”

Though small in size, Anderson said every player will have her own role to play in hopes of making it to the championship game.

“This season is all about a journey. It’s all about improving. You’re just trying to continue to get better. Ultimately, our goal is to win the conference, but there’s a lot of steps along the way,” Anderson said. “I think just continuing to keep our focus on having the best culture that we can, having the best chemistry, having players continue working hard every single day — If we focus on those small things, then I think it will give us the best chance of getting where we want to go.”