Elon softball is coming out swinging 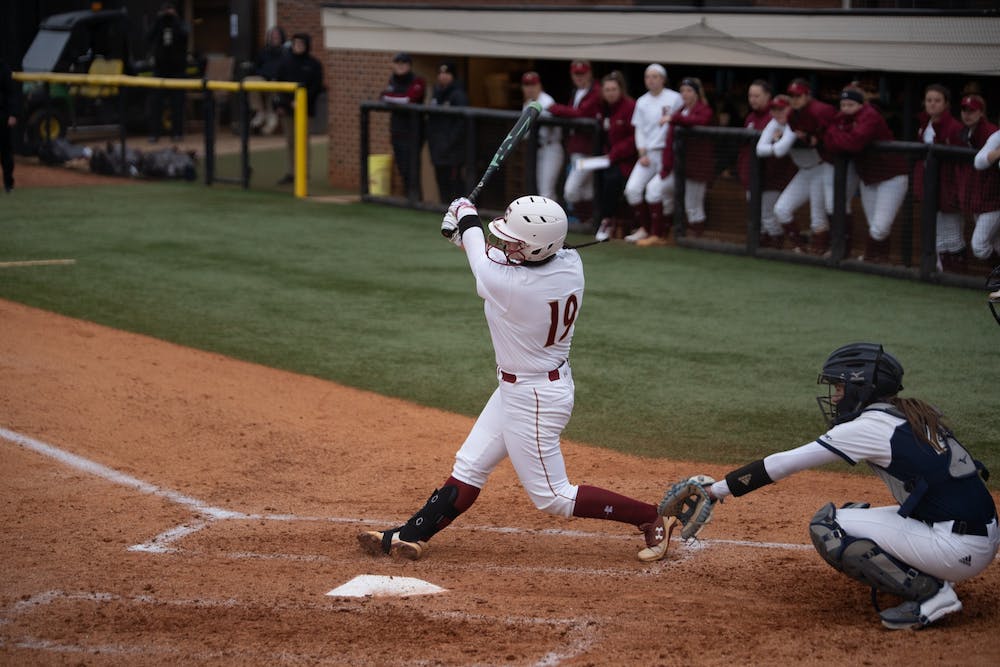 At the end of a historic season for Elon University’s softball team, head coach Kathy Bocock braced herself to lose seven seniors. Those seniors had been working together for the past four years, and according to Bocock, had a level of comfort with each other that could only come with experience.

That experience and trust in each other led to a historic season, with the team working its way to the Colonial Athletic Association’s championship game against number one seed James Madison University.

This was the first CAA championship game the Phoenix have ever appeared in, and Bocock doesn’t intend for it to be the last.

Bocock said the championship loss is not something she dwells on anymore, and she is looking ahead to this season.

“Believe it or not, I might have thought about it June and July, but once August rolled around, I have a whole new group,” Bocock said. “I really appreciate everything that we did last year and all the hard work that all the young ladies put in. But for me, that’s the past now. We’re trying to move forward to a new year.”

The Phoenix ended its last season with a 33-20-1 overall record and a 13-7 record in the CAA. This year, the Phoenix is riding the momentum, taking on big-name schools like University of South Carolina, Duke University and Boston College early in its roster.

A major accomplishment for the Phoenix this preseason was coming out of its game against University of North Carolina Chapel Hill with a win on Feb. 26.

Senior Morgan Reich has played games against UNC before and said she was doing her best to stay relaxed against the Tar Heels.

“We played really good defense. I felt like we were doing the job, both ways,” Reich said. “As a whole, I think we were just really into the game and being very serious.”

Bocock said that none of her players seemed nervous, and she praised her team for not feeling pressure playing UNC. Bocock said her team played that game like it was just any other game.

During softball’s preseason, the Phoenix earned a number two rank in the CAA preseason poll, receiving one vote for a first place spot. At first, Bocock said she was surprised they were ranked that high, as the team had graduated seven seniors of a 19-person team and welcomed six new freshmen. This year’s roster has 18 players.

The CAA preseason poll is submitted by conference coaches. Coaches cannot vote for their own team, and ranks are assigned after all votes are in.

“I go in and actually do my homework, and look at all the teams and who they’ve graduated and then what they should be,” Bocock said. “Being picked second is awesome because that’s how far our program has come. It shows that so many people have so much respect for us.”

Those six new players combined with the sophomore class make up for almost 80% of the roster. Bocock said it reminded her of her 2016 team, which was comprised of two seniors, Kayla Caruso and Emily Cameron. That year also featured a roster in which over half of the players were underclassmen.

The lack of experience in her current team doesn’t bother Bocock, though, because she already has been able to recognize the physical talent the group possesses.

“All of them have so much great potential, but it’s maturing for them right now and trusting themselves. It’s not their physical wellbeing; it’s their mental,” Bocock said. “They’re probably their worst enemies at times. But as far as their softball skills, stuff like that, they’re still learning, but the more they learn, the better they can get.”

As a senior, Reich also gets a chance to observe the new players and agrees with her coach that her fellow teammates have potential.

“It’ll be really fun to see how they play in the next few games,” Reich said. “I just think that they can play so many different positions, and so you never know what can happen at any given moment.”

Bocock said one of the largest adjustments for any freshman she has is time management. Unlike most other sports on campus, baseball and softball will play almost 60 games in the main season. Reich said that for new players, it can be hard to manage their time effectively, but it becomes second-nature with experience.

“Off-days are really good days to just catch up with schoolwork. I spend most of my day just trying to get ahead for the week, especially because when you know you have a midweek game, and then if you’re on the road or something like that, where you have three to four games, you want to get ahead of that schoolwork,” Reich said. “Just refueling honestly. It’s really just about resetting for that week and getting back on track.”

Bocock said it is also important to not only help her players learn how to manage time, but to also get used to the fact that they are playing so frequently.

"These young ladies are incredible student athletes for what they do on a daily basisKATHY BOCOCK."

“These young ladies are incredible student athletes for what they do on a daily basis,” Bocock said. “We’re not taking anything away from the other teams, but baseball and softball is long. I know basketball is both semesters, and it’s long, but they don’t play that many games. So they get more practice time and then games, whereas once we get started, we have a little bit of practice, basically, and a lot of games.”

The preparation has already paid off for the Phoenix. Its talent and potential are showing in its early games. It is also what Bocock is hoping will get her team exactly where she wants them.

“Championship game for sure. And this year, trying to win it,” Bocock said. “We tried to win it last season, we fell a little short, but definitely, that’s where we want to see ourselves.”