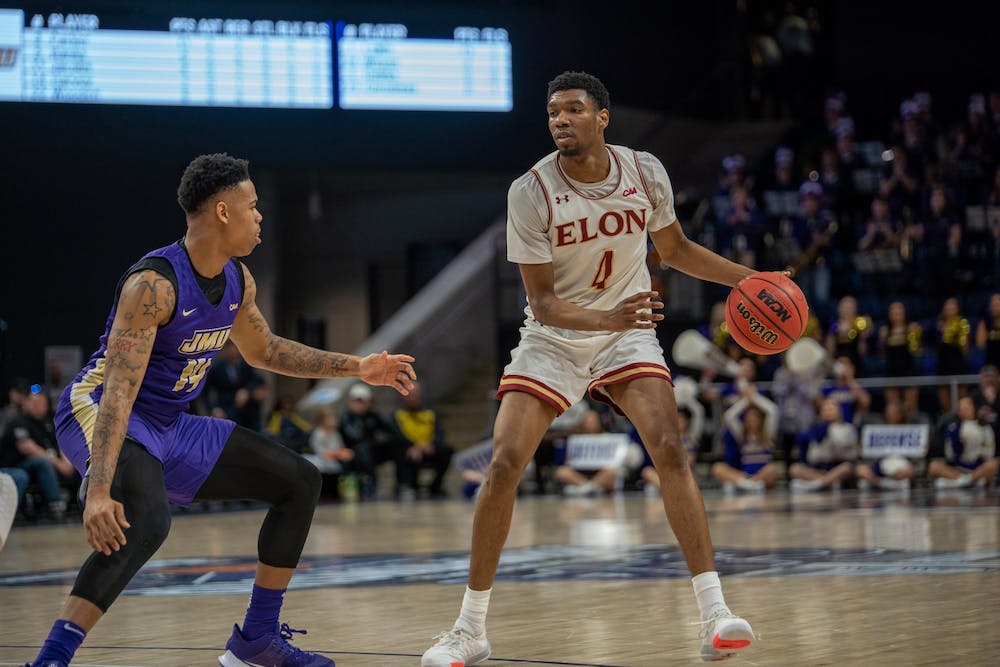 Photo by Clare Grant | Elon News Network
Elon Univeristy graduate student and guard/forward Marcus Sheffield II keeps the ball away from the James Madison Dukes in the second game of the CAA tournament, first for the Phoenix, in Washington D.C. at the D.C. Entertainment and Sports Arena on Saturday March 7, 2020. The Phoenix beat the Dukes 63-61.

Despite the celebrations after the game, it was a rough start for the Phoenix. James Madison quickly put together a 12-0 run in the first four minutes of the game.

“They jumped us right away, out of the gate,” Schrage said. “And we just kept battling back and battling back, and stay positive about it and felt pretty good about being a two-possession game at halftime.”

MUST WATCH:
Sheffield knocks down a step back jumper win the game for Elon 63-61 pic.twitter.com/zn4e2z7al7

Coming out of halftime, the Phoenix came all the way back to tie the game at 43-43 with 13:39 left to play. However, the comeback would not last long, and the Dukes would pull away once more. With 9:11 left in the second half, James Madison had a 50-43 lead.

Despite a long scoring drought in the second half, Elon would not go down quietly. With 45 seconds left in the game, the Phoenix stormed all the way back to tie the game at 61-61 on a dunk from graduate guard Marcus Sheffield II.

Heading into the final moments of the game, Elon had yet to hold the lead. That changed when Sheffield II drained a jump shot with three seconds left to secure the 63-61 victory.

After the game, Sheffield II was asked by a reporter if he had ever made a shot like that before. he could not recall if he had, but that he would not forget this one.

“I probably made a game-winner, like, when I was really young, but nothing too memorable,” Sheffield said. “This one was definitely memorable.”

After the game, Schrage said there are plenty of clutch players on the team, but he knew that Sheffield was going to be the one to take the shot when the game was on the line.

“It's no secret. I don't care for the whole world to know. I'm going to Marcus Sheffield,” Schrage said. “I believe in him so much as a player in any moment. He never gets too high. He never gets too low, which helps him in those moments.”

It is a quick turnaround for the Phoenix, with a matchup against the number two seed in the tournament, The College of William & Mary, on Sunday. Elon lost to the Tribe in the final game of the regular season, but Sheffield said that he is confident and that having played them recently can be an advantage.

“We’re confident against William and Mary, but not only just them. Just every team in the conference,” Sheffield said. “We know what the game plan is probably going to be…We’re just confident going in that we can get the W.”

Tip-off for Elon’s Sunday matchup against William & Mary is scheduled for 6 p.m.