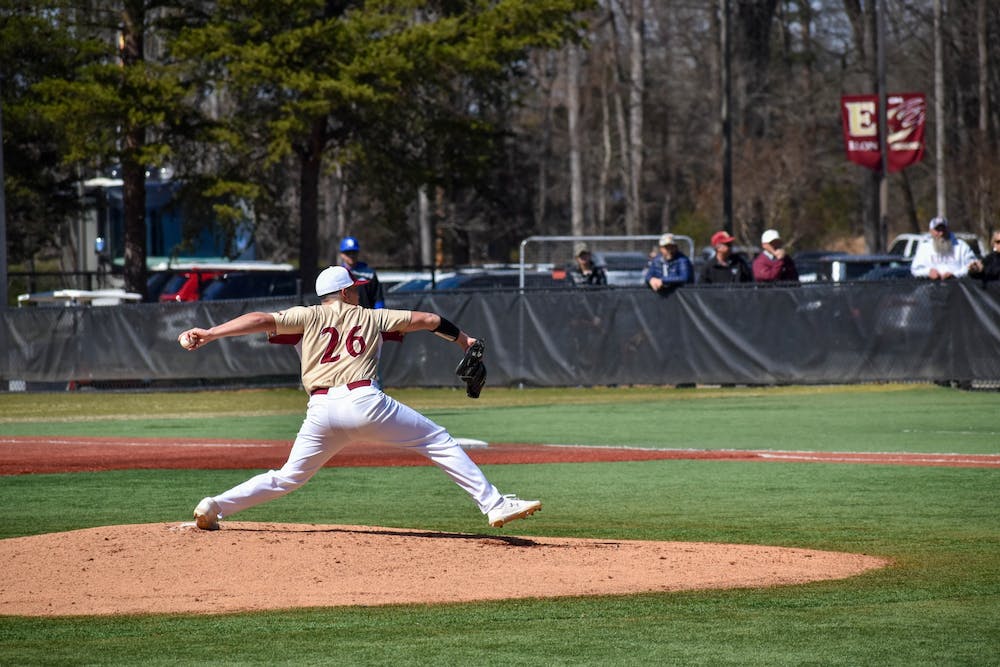 Elon University baseball (6-5) lost its third straight game to Indiana State University (5-5) Sunday. The Phoenix lost to the Sycamores in the series finale 6-2.

Indiana State managed to put up nine runs the night before, and the Sycamores continued to produce in Sunday's series finale. In the top of the second inning, Indiana State jumped out to a 2-0 lead on a two-run double from freshman catcher Grant Magill.

Senior starting pitcher Dean McCarthy did not have his best stuff Sunday. Thanks to a two-run single in the top of the fourth from Indiana State infielder Brian Fuentes, the Phoenix were staring at a 4-0 deficit. McCarthy finished the day with four earned runs across four innings of work.

One of the bright spots for Elon was the dominant outing from freshman pitcher Trevor Kirk. Kirk came into the game in place of McCarthy, and retired 10 of the 11 hitters he faced, giving up no runs and striking out six Sycamore batters.

After the game Kirk said that an outing like today can give him a boost going forward.

“It gives me a lot of confidence, especially being a freshman,” Kirk said. “Working on some stuff in the pen with coach, some technical stuff, and then having an outing like that really backs it up.”

The Phoenix offense was ice cold Sunday. Elon would have to wait until the bottom of the fourth inning to score its first run when sophomore outfielder Anthony Galason scored from third base on a wild pitch.

Freshman starting pitcher Cameron Edmonson was dominant for the Sycamores. Edmonson would leave the game with two outs in the bottom of the seventh, finishing his first start of the season with six strikeouts and only one earned run allowed.

Elon would go on to add a second run in the eighth inning, but Indiana State would score two more runs in the ninth, and complete the series sweep by a final score of 6-2.

Scoring runs was a problem for the Phoenix all weekend, Elon head coach Mike Kennedy said that Elon can learn from this moving forward.

“You can get fooled by winning some games sometimes and think you’re better than you are,” Kennedy said. “We ran into a little bit of a buzzsaw today in a club that can really, really pitch and we couldn’t get away with mistakes, and that is a good lesson for us.”

Elon will have to look for a victory on the road. The Phoenix will travel up to Lynchburg, Virginia on Tuesday, March 3 to take on Liberty University, with first pitch scheduled for 4 pm.