Presidential candidates battle for the top spot in Elon's SGA 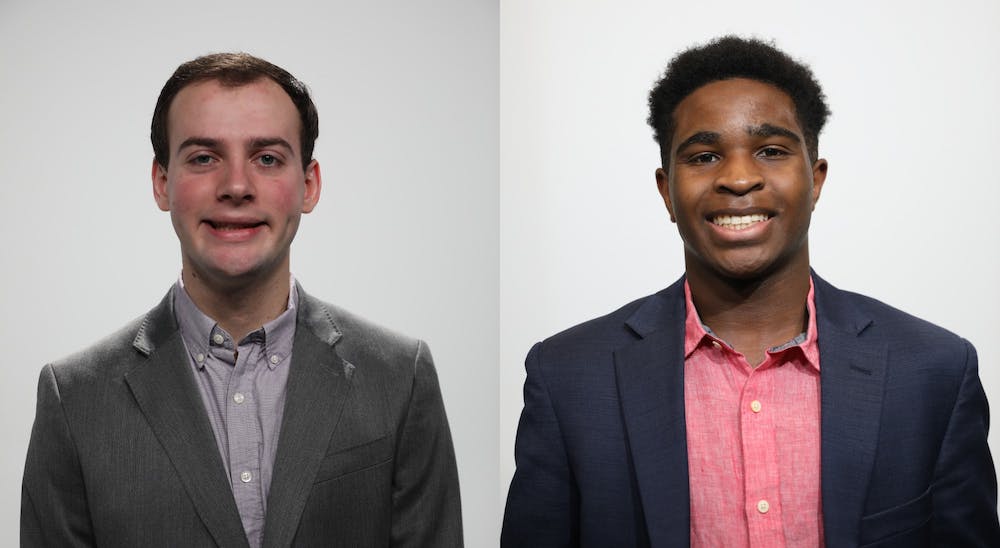 Juniors Brandon Veal and Robbie Miley are running for Student Government Association executive president this election season. While they both currently represent the class of 2021 as president and vice president, neither of them won their first SGA campaigns their freshmen year.

Veal was later appointed to the senate in 2017, and Miley was appointed to the Academic Relations Council in 2018. Both candidates said a passion for student government is what led them to their roles.

According to senior and current Executive President Jack Johnson, candidates need to be ready for both the executive duties of the position and the attention they will receive in the role.

“I just didn’t fully understand how much scrutiny there would be during the election itself,” Johnson said of his experience last year. “I knew every one of my decisions afterward would be scrutinized, but the level of focus people had was intense.”

Johnson said the campaign process “took a huge hit” on his mental health, leaving him with a feeling of “imposter syndrome,” in which he felt like he did not measure up to past presidents.

“It’s not like it wasn’t something I signed up for,” Johnson said. “It’s just startling to lose anonymity on a college campus. It’s one of those things that you don’t realize you’re giving up until it’s gone.”

This loss of anonymity is the greatest challenge of the job, Johnson said.

“You aren’t just a student anymore,” Johnson said. “There will come a day for whoever takes this job that they realize what they traded. You can psychologically try to do that during the campaign, but until you’re in it, it’s impossible to fully realize.”

According to Johnson, candidates also need to be realistic in their policy goals. He said while candidates will want to make people happy, they need to focus on what is feasible, reasonable and in the best interest of the student body.

On top of limiting the list of policy goals, Johnson said candidates should be open to hearing ideas from other perspectives, since the role has “little power but immense influence.”

Most of all, Johnson said candidates must have a “passion for Elon.”

“There are times where these hours will burn you out on top of your class load,” Johnson said. “It hits everyone at some point. Having intense passion for the school and having a good vision are two things I would say that are critical for that.”

Having grown up in Raleigh, Veal said he wanted to “branch out” from the bigger state universities where he would be surrounded by his high school peers. After hearing about Elon University as a senior, he said his campus tour sealed the deal.

Though attending different sporting events — from basketball to softball — is his favorite part of Elon, his political science major has given him memorable opportunities, Veal said.

After a class trip to India over spring break in 2019, Veal said he took home knowledge of how governments do not function, rather than how they work well. He said the trip was his favorite course so far because it added more “context” to his knowledge of India.

“You come back and then you get the chance to take a step back and say ‘we learned this about India,’ but we didn’t learn why it’s like that until you got there,” Veal said.

Leading the course was Jason Kirk, associate professor of political science and policy studies, who said seeing the world’s largest democracy firsthand is “eye-opening” for “any student who’s interested in democracy.”

Veal said observing the political unrest in India gave him a better idea of what makes a good leader.

As executive president, Veal said he would want to focus on improving student involvement and campus security.

“Student involvement would probably be number one for me,” Veal said. “We have the phrase ‘bELONg’ with ‘Elon’ outlined in big letters, but if the students don’t feel like they have some stake in the event, or they feel like they don’t feel driven to go to the events, they won’t go.”

Veal said he would take the approach he takes as a resident assistant in Danieley Neighborhood and encourage students to attend events by going with them.

Veal said “starting at the ground level” is important in showing freshman students that events are worth attending so that they will “want to be a part of that culture.”

According to Veal, changes in campus security would be “difficult to implement” as a student but he said he plans to work closely with the administration in order to accomplish his goals.

Campus security became a top issue for Veal after reports of drivers shouting racial slurs at pedestrians were reported earlier this year.

“Since the beginning of the academic year we have received multiple bias reports about individuals driving through campus, shouting slurs out the window at individuals walking on the sidewalk,” Vice President for Student Life Jon Dooley wrote in a mass email to students and faculty in October. “The incidents have included catcalling or slurs based on gender, sexual orientation and/or race.”

While Veal said he did not have any firsthand experience with the bias incidents, he said an incident of that nature is “disturbing, upsetting and frankly doesn’t need to happen, but we do whatever we can to make sure it doesn’t continue to happen.”

Beyond being ready for the role’s daily duties, Veal said he is prepared for any attention the presidency would bring.

"I really want to be that middle ground between the student body and the staff and actually, truly hear all their concerns whenever they have them."

“My office will always be open,” Veal said. “I think that the student body president’s role should be based off of the things that students feel are most concerning. So I really want to be that middle ground between the student body and the staff and actually, truly hear all their concerns whenever they have them.”

As a word of advice to the candidate, Kirk said focusing on delegation and setting priorities would help Veal if elected.

“Decide based on everything that you know, Brandon, through your experience at Elon so far,” Kirk said, “What are your priorities for the time that you have in this position?”

While Veal said he understands it might be impossible to address every concern, he plans to focus on issues that come up the most.

“When you start hearing the same concerns pop up over and over and over, you can act on those you can do something about those,” Veal said. “We might not get through the whole list of 1,000, but if you can get at least 50 solid concerns that 1,000 students have, you’ve done the same amount of work.”

Running against Veal is fellow junior Robbie Miley. As a business major, Miley said he has honed his ability to work with people from different backgrounds.

“You need to be a president for everybody, not just the people that you really like or are similar to you,” Miley said. He added that in a Winter Term course he took in India, he learned about communicating with people from different backgrounds after visiting businesses and cultural sites abroad.

Associate professor of economics Mark Kurt traveled to India with Miley in 2019, and said the experience helped Miley learn the importance of “dealing with difference.”

Miley said “being delicate in the way that you talk to people and understanding who they are and where they come from and what’s the best way to work with them” is important.

Talking to new people is one thing Miley said drew him to Elon in the first place. After visiting other North Carolina schools, Miley said seeing students “connected” with each other set Elon apart.

"It's a very 'Huggy' campus, but I kind of enjoy that I like people being a little more outgoing and a little more friendly because I feel like that's kind of a little bit who I am."

Getting students connected with SGA is an important issue for Miley as he enters his campaign, he said. In addition, he plans to work with Elon Votes to increase civic engagement on campus.

The biggest thing Miley said he wishes he could change about Elon is the cost of education.

“This is a really awesome school, but it’s also relatively expensive and it kind of prohibits a lot of lower income students from being able to come here,” Miley said. “Or if they do come here for their freshman year or sophomore year, some of them eventually end up dropping out because they can’t afford it.”

Though Miley acknowledged changing the cost of tuition or meal plans is difficult to implement, he said he has worked with SGA to reduce the cost of textbooks by encouraging professors to use books that are available online for a lower price.

Miley is confident in his ability to implement his other ideas, he said.

“I’ve passed legislation in student government before, and my biggest takeaway is that you need to work with a lot of different people,” Miley said. “I think the person as student body president that gets the most done is the person who works the hardest.”

Kurt said while traveling with Miley, he observed this quality.

“I found if Robbie said he was going to do something he followed through with it,” Kurt said. “So, I feel like that’s a positive attribute.”

Miley also emphasized that he would remain accessible to students as president.

“I want to try and portray the fact that I really am an open person if you want to talk to me please come to talk to me,” Miley said.

As passionate as Miley is about SGA and the election, he maintained that his campaign will be run with “integrity.”

“That’s not something I’m willing to compromise in terms of winning or losing or getting something done within student government,” Miley said.